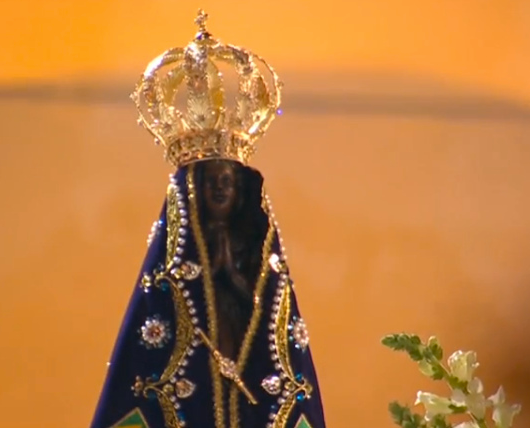 Our Lady of Aparecida, Patroness of Brazil

Pope Francis constantly refers to this. He has just visited the Shrine again

More particularly he refers indirectly to the Fifth General Conference of the Bishops of Latin America and the Caribbean,  held close to the Shrine of Our Lady of Aparecida, Patroness of Brazil in May/June 2007

Pope Benedict delivered at the beginning of the Conference an address which set out the agenda (Conference Hall, Shrine of Aparecida Sunday, 13 May 2007)

The Conference produced a document called "The Aparecida Document" which was approved of by Pope Benedict. The Document and Pope Benedict`s introduction are here

"I read the “Aparecida Document,” the final report of the Fifth General Assembly of the Bishops of Latin America and the Caribbean (CELAM), which was held in Brazil in 2007. This master plan for the New Evangelization in Latin America is rather long—20-times longer than the Gospel of Mark, I’d guess. But in virtually every other respect it’s an entirely admirable piece of work that should be known throughout the world Church."

Weigel was impressed by the lack of defensiveness about the document. It frankly acknowledged that the Church had failed in its essential message to evangelise. It was not a political or bureaucratic document.

Weigel interviewed the then Cardinal Bergoglio about why the Document was such a break from previous CELAM documents. Here is what he said:

"In a meeting with Cardinal Jorge Mario Bergoglio, S.J., the archbishop of Buenos Aires and one of the world Church’s great leaders, I asked how the Aparecida Document—which seemed such a break from previous CELAM documents—had happened. The cardinal cited three reasons.

First, Aparecida is a Marian shrine, and meeting there oriented the bishops’ reflections in two directions: toward the traditional piety of Latin America and toward Our Lady as the Star of the New Evangelization (as Blessed John Paul II had named her). In that intersection between past and future, and under Mary’s protection, there was an opportunity for real creativity in facing the truth of the Church’s situation and prospects.

Second, the bishops had regular contact with the throngs that came to Aparecida on pilgrimage: it was as if CELAM was meeting, not in some convention center or monastic enclosure, but right in the middle of the People of God on their pilgrimage through the early 21st century—a pilgrimage in which both popular piety and new missionary initiatives will be part of the New Evangelization and in which lay Catholics will be the Church’s primary evangelists.

And third, the cardinal replied, the bishops were surrounded by prayer: as they discussed the future of the Church in Latin America and the Caribbean at the shrine of Aparecida, they could hear their people praying around them. Thus the fifth CELAM conference became, not another bureaucratic exercise, but a kind of retreat."

The visit to Aparecida and the Aparecida Document seemed to have a profound effect on Pope Benedict XVI. Most of his Address to the Members of the Curia in December 2007 was devoted to the visit and the Document

Here is his address

The Address should be read in full

Here is a short extract:

"[I]t was there that we drafted the document on the theme "Disciples and missionaries of Jesus Christ, so that in him they may have life".

Of course, someone might immediately ask: but was this the right subject at this time in history in which we are living? Was it not too abrupt a turn toward interiority at a moment when the great challenges of history, the urgent questions about justice, peace and freedom, require the full commitment of all people of good will and in particular of Christianity and the Church? Should we not have tackled these problems rather than withdrawing into the inner world of faith? ..

[W]as Aparecida right to give priority to the discipleship of Jesus Christ and to evangelization in the quest for the life of the world? Might it have been an erroneous withdrawal into interiority?

No! Aparecida decided correctly because it is precisely through the new encounter with Jesus Christ and his Gospel - and only in this way - that forces are inspired which enable us to give the right response to the challenges of the time."