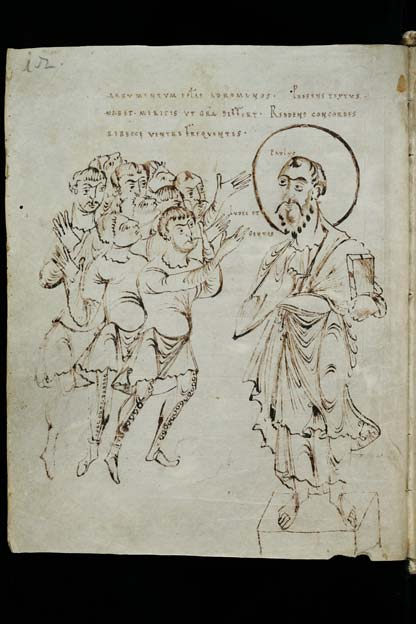 Paul the Apostle preaching in front of a great number of Jews and Gentiles in Rome
From a copy of the Pauline Epistles and copies of Alcuin's works "De dialectica" and "De rhetorica" and of the work "Peri hermeneias"
Written in the monastery of St. Gall in the second half of the 9th century, with amendments from the 11th century
Parchment 21.4 x 16.7 cm
Cod. Sang. 64, 12
Stiftsbibliothek, St. Gallen

The 9th century drawing shows St Paul standing in front of a group of Jews and Gentiles in Rome. He is preaching to them but the audience is restless and argumentative

Paul is acting as peacemaker and trying to restore peace among the quarelling people. He is reddens concordes rebeccae ventre frequentes, says the inscription ("Restoring peace and harmony among the bickering children of Rebecca`s womb")

The picture accompanies an introduction to a commentary on one of St Paul`s Letter to the Romans.

The author is the monk Pelagus who tells the tale of a a dispute between the Jews and Gentiles of St Paul`s day who had converted to Christianity.

They believed that each group was more deserving of salvation.

In Romans 9 and following St Paul addresses Israel’s unbelief and its rejection of Jesus as saviour. He discourages both complacency and anxiety on the part of Gentiles. To those who might boast of their superior advantage over Jews, he warns that their enjoyment of the blessings assigned to Israel can be terminated.

St Paul uses the example of Jacob and Esau born of Rebecca:

"but also when Rebecca had conceived children by one husband, our father Isaac—
11 before they had yet been born or had done anything, good or bad, in order that God’s elective plan might continue,
12 not by works but by his call—she was told, “The older shall serve the younger"

Both religions took the prophecy made to Rebecca ("Two nations are in your womb. Two peoples are quarrelling while still within you. But one shall surpass the other and the older shall serve the younger"[Gn 25:23]) to further their competing claims to divine favour

However they argued so much in her womb Rebecca cried out: “If it is like this, why go on living!”