Dürer: Head of the Dead Christ 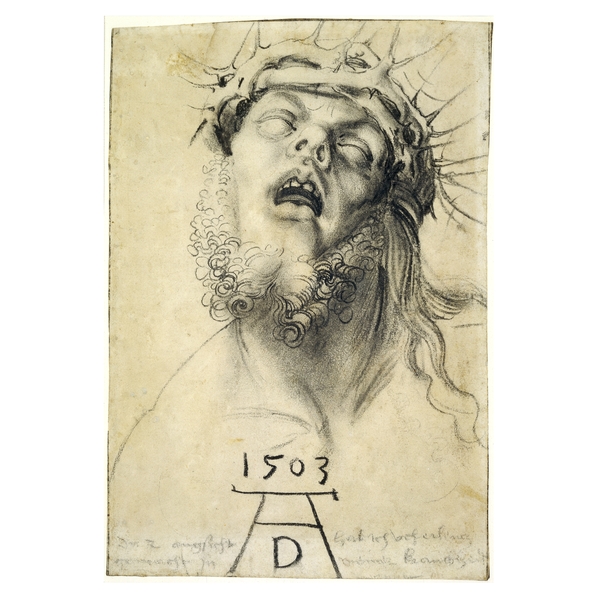 The inscription is by Dürer:

“Die 2 angsicht hab ich uch erlgemacht in meiner Kranckeit“ ('I produced these two countenances when I was ill').

The second face is also in the Museum

This is of course only one of a number of portraits by Dürer of the crucified Christ. However, this must be one of his most powerful depictions

At the time of this drawing Dürer was in Nuremberg

His influence in Western European art during the Renaissance was profound

In the new Encyclical by Pope Francis Lumen Fidei, there is one paragraph when he considers the importance of  contemplation on the death of Christ in the life of the faithful

"16. The clearest proof of the reliability of Christ’s love is to be found in his dying for our sake. If laying down one’s life for one’s friends is the greatest proof of love (cf. Jn 15:13), Jesus offered his own life for all, even for his enemies, to transform their hearts.

This explains why the evangelists could see the hour of Christ’s crucifixion as the culmination of the gaze of faith; in that hour the depth and breadth of God’s love shone forth.

It was then that Saint John offered his solemn testimony, as together with the Mother of Jesus he gazed upon the pierced one (cf. Jn 19:37):

"He who saw this has borne witness, so that you also may believe. His testimony is true, and he knows that he tells the truth" (Jn 19:35).

In Dostoevsky’s The Idiot, Prince Myskin sees a painting by Hans Holbein the Younger depicting Christ dead in the tomb and says: "Looking at that painting might cause one to lose his faith".

The painting is a gruesome portrayal of the destructive effects of death on Christ’s body.

Yet it is precisely in contemplating Jesus’ death that faith grows stronger and receives a dazzling light; then it is revealed as faith in Christ’s steadfast love for us, a love capable of embracing death to bring us salvation.

This love, which did not recoil before death in order to show its depth, is something I can believe in; Christ’s total self-gift overcomes every suspicion and enables me to entrust myself to him completely."