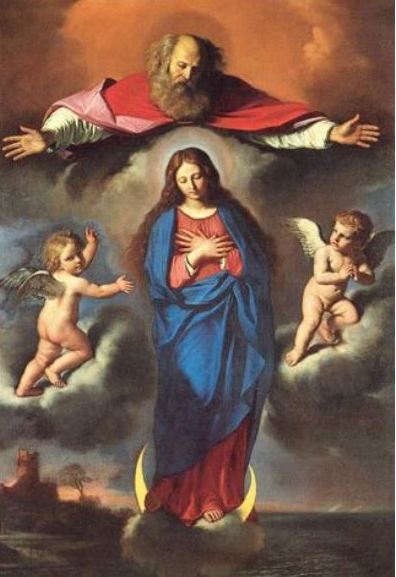 Giovanni Francesco Barbieri : Il Guercino (1591 - 1666)
The Immaculate Conception
c. 1656
Oil on canvas
259 x 180 cm
Pinacoteca "F. Podesti", Ancona
This is one of the artist's late works. He was a highly prestigious artist of religious works, celebrated as one of the greatest painters of his day
In his late works, Il Guercino exhibited 'a mastery of tender and tranquil colour' (Ellis K. Waterhouse, Italian Baroque Painting, London, 1962, p. 115).
It would appear that this was a work meant and commissioned for private devotion
For a Baroque artist in the Counter-Reformation, it is noteworthy that the iconography used is different from the standard iconography of the time. There is no crown of stars. And God the Father is present.
She does stand on the crescent moon, reminiscent of the Apocalypse but she does not crush the serpent. There is no serpent
It is a meditation on two of the main Scriptural foundations for the Doctrine of the Immaculate Conception:

"And the angel being come in, said unto her: Hail, full of grace, the Lord is with thee: blessed art thou among women" (Luke 1:28)

"And she [Elizabeth] cried out with a loud voice, and said: Blessed art thou among women" (Luke 1:42)

"In like manner did [The Fathers and writers of the Church] use the words of the prophets to describe this wondrous abundance of divine gifts and the original innocence of the Virgin of whom Jesus was born.
They celebrated the august Virgin as ... as the ark and house of holiness which Eternal Wisdom built, and as that Queen who, abounding in delights and leaning on her Beloved, came forth from the mouth of the Most High, entirely perfect, beautiful, most dear to God and never stained with the least blemish."