Crivelli and the Madonna and Child 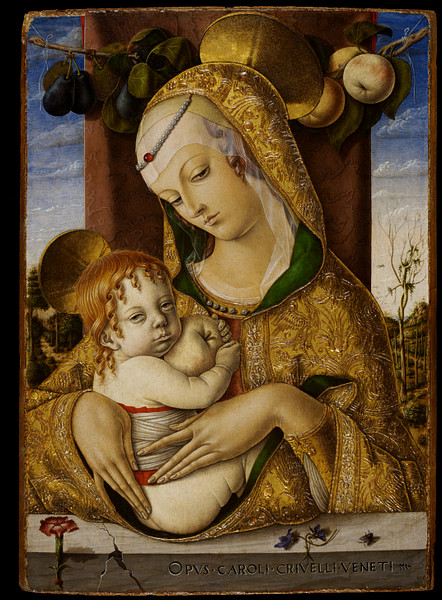 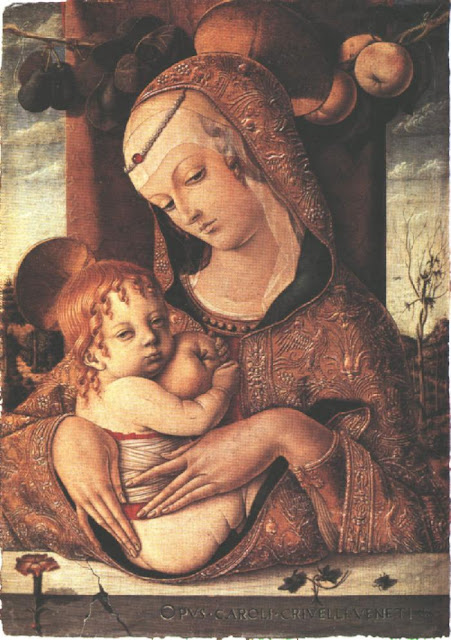 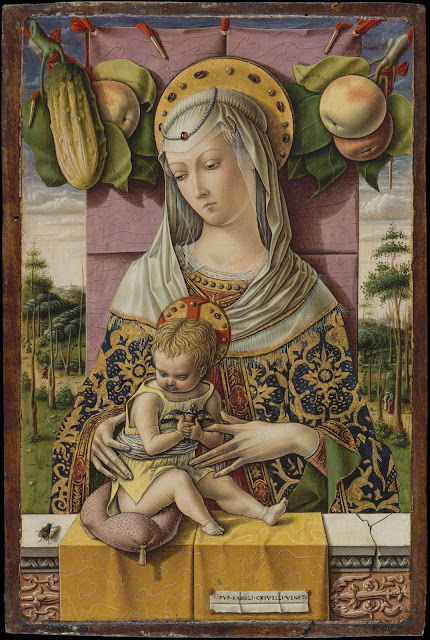 Carlo Crivelli 1430/35 - 1495
Madonna and Child
c. 1480
Tempera and gold on wood, 37.8 x 25.4 cm
The Metropolitan Museum of Art, New York
Crivelli specialised in exquisite devotional paintings of the Madonna and Child
Here are two examples: one in The Victoria and Albert Museum in London known as "The Jones Madonna" (after the donor of the work to the V and A), and the other in The Metropolitan Museum in New York. Both were meant probably as private devotional paintings.
They are intricate works full of devotional symbolism which probably for the modern taste are perhaps slightly overbearing.
With the pre-Raphelites, Crivelli`s reputation increased and then fell again. Now there is a recrudescence of interest in the artist.
The apple is the symbol of Death which arose from the eating of the apple in the Garden of Eden.
The gourd is the symbol of recovery and redemption, of Resurrection deriving from the experiences of Jonah.
The fly is associated with Satan, the great Tempter. The fly is bearer of evil or pestilence, a symbol of sin
The goldfinch is associated with the Passion and Christ's Crown of Thorns because the bird feeds among thorns. One recalls Raphael’s painting, “Madonna of the Goldfinch,” again showing an Infant Jesus lovingly stroking a goldfinch.
THe fly and the goldfinch were often shown together as the goldfinch is the eater of flies, a saviour against disease harboured by the fly
The commentary by the Victoria and Albert on its work is masterly and worth reading in full.
Here is what the Museum says about the symbolism in the work in the V and A:

"[T]he painting shows the Virgin's half-length figure standing before a parapet holding the Child against her.
Behind her is a dark red embroidered dossal, across which hangs a swag of fruits with figs and peaches. Reminiscent of Mantegna's art, these are not only depicted for decorative purposes but enhance the devotional significance of the image. They enclose Christian symbolical meanings and relate to the story of Christ: Redemption (peach) and Fertility (fig).
Behind the dossal or cloth of honour is a bird-view of a hilly landscape showing on the left flourishing trees and on the right an isolated leafless tree. Again, trees are symbolically important in the religious iconography and act as a link between the sky, the earth and hell.
As flourishing, they allude to the regeneration whereas leafless trees stand for a prediction of death.
Furthermore, the leafless tree, an important feature in Veneto-Paduan devotional art of the 1450s (Lightbown, 2004), may allude to the Tree of Knowledge which is believed to have survived under this form in the Earthly Paradise. This bare tree already appeared in the early Bergamo Madonna and in other compositions by Mantegna and Schiavone (see Mantegna, Agony in the Garden (1460) and Schiavone's Madonna, (late 1450s) both in The National Gallery, London).
Symbols for life and death pervade the composition, which structure reiterates this idea with the parapet, cracked all'antica, which is sometimes interpreted as an altar, alluding thus to the coming sacrifice of Christ.
On the parapet are two more symbolic flowers: the pink or carnation which relates since the Middle Ages to the Passion of Christ while violets are Marian flowers enhancing her humility and purity.
These floral symbols are counterbalanced by the fly on the parapet far right, which represents evil and justify somehow the coming sacrifice of Christ for the redemption of mankind.
Small devotional pictures of this kind were made to solicit prayers and meditation from the believer who was supposed to look at it.
This is the purpose of the symbolical fruits which act as reminders of the religious credo and the reason why the Virgin and the Child are looking in two different directions so as to embrace the whole family kneeling before them" 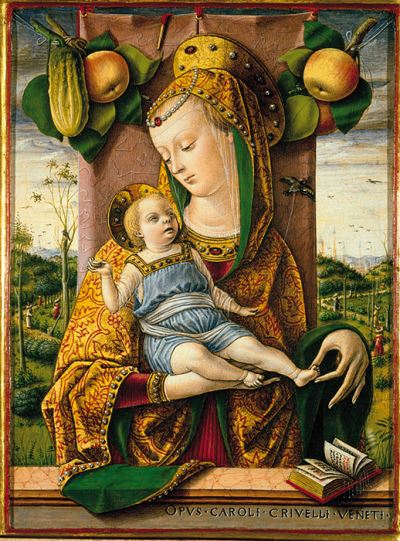 Carlo Crivelli 1430/35 - 1495
Madonna and Child
Tempera on panel
21 cm x 15,5 cm
Pinacoteca Civica, Ancona
Here is another on the same theme which is in a private collection 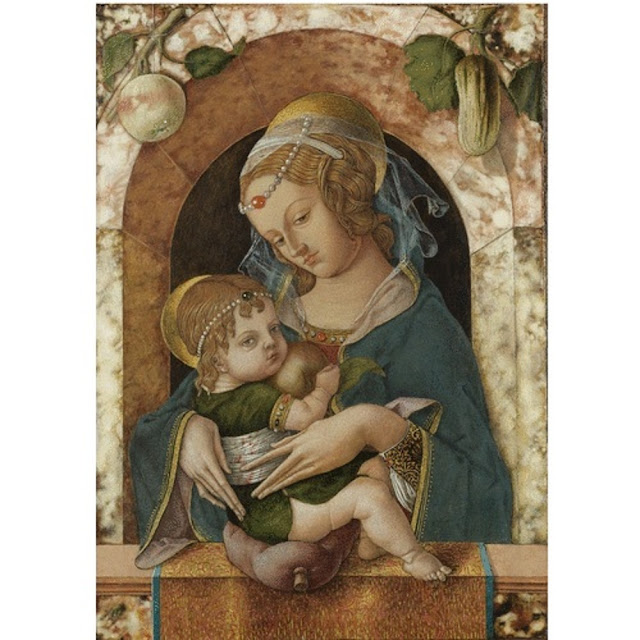