A Daring Picture in The National Gallery 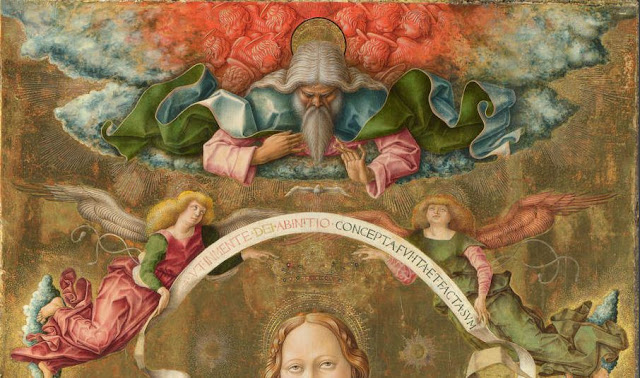 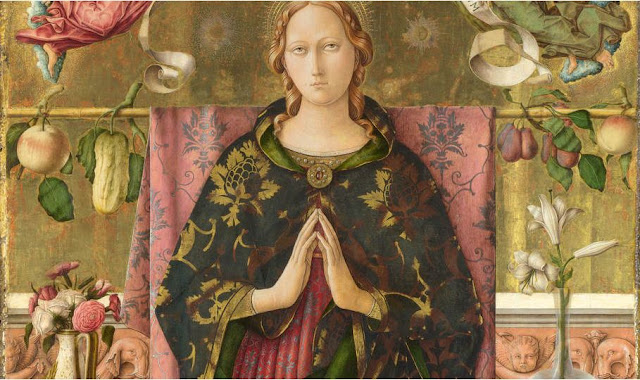 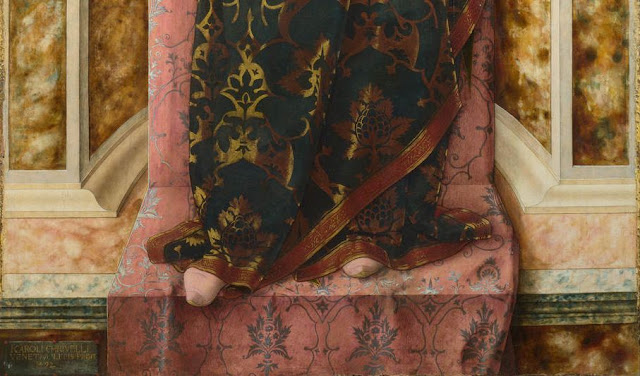 It was purchased by The National Gallery in 1874 and quite a remarkable acquisition it was. Considering that the Declaration of the Dogma of the Immaculate Conception had provoked protest and outrage amongst pious Anglicans as had the First Vatican Council and its Decrees in 1870 in particular about Papal Infallibility.
The Gallery proceeded very cautiously. It could not as a public institution display a work which would have caused deep offence and outrage. It seems to have named the picture "THe Virgin in Ecstasy" rather than "The Immaculate Conception". Here is what an English biographer wrote of the painting in 1910:

"To the next year (1492) belongs the masterpiece in the National Gallery (No. 906) known as " The Virgin in Ecstasy (The Conception)" but which rather presents (as the appended text shows) the idea which is the foundation of the doctrine of the Immaculate Conception, combined with the "Coronation" of the glorified mother.
It is intended, in fact, to bring before us not the historical mother of Christ so much as that mediaeval conception of the mystical being of Ecclesiasticus and the Book of Wisdom, existing from all time in the mind of God as the instrument of the Incarnation, and returning to share the glory of her divine Son.
Crivelli has expressed with rare distinction that combination of humility and awe with a sense of personal dignity which befits this ideal of the Virgin. In herself she is an imposing figure, but she is absorbed in the divine influences which mould her destiny.
Never did Crivelli come nearer to the grand style than in this magnificent conception.
For the first time we find here in the Virgin a new type of features which we shall notice in others of these latest works. It may be described as more academical than the naive, girlish Virgins of the earlier time.

The flying angels are also new, and remind us of similar figures in Umbrian art. It is possible that Crivelli may have received them from that source."
(G. McNeil Rushforth, Crivelli 1910)

Even in 1910 one had to be careful what one said about the picture.
Even today people can have strong adverse reactions to the Doctrine of the Immaculate Conception as can be seen from some of the reactions to paragraphs 59 and 60 of the ARCIC Mary: Grace and Hope in Christ (2005) on The Immaculate Conception:
"59 Roman Catholics are also bound to believe that “the most blessed Virgin Mary was, from the first moment of her conception, by a singular grace and privilege of almighty God and in view of the merits of Christ Jesus the Saviour of the human race, preserved immune from all stain of original sin” (Dogma of the Immaculate Conception of Mary, defined by Pope Pius IX, 1854). The definition teaches that Mary, like all other human beings, has need of Christ as her Saviour and Redeemer (cf. Lumen Gentium 53; Catechism of the Catholic Church 491).
The negative notion of ‘sinlessness’ runs the risk of obscuring the fullness of Christ’s saving work. It is not so much that Mary lacks something which other human beings ‘have’, namely sin, but that the glorious grace of God filled her life from the beginning. The holiness which is our end in Christ (cf. 1 John 3:2-3) was seen, by unmerited grace, in Mary, who is the prototype of the hope of grace for humankind as a whole.
According to the New Testament, being ‘graced’ has the connotation of being freed from sin through Christ’s blood (Ephesians 1:6-7). The Scriptures point to the efficacy of Christ’s atoning sacrifice even for those who preceded him in time (cf. 1 Peter 3:19, John 8:56, 1 Corinthians 10:4).
Here again the eschatological perspective illuminates our understanding of Mary’s person and calling. In view of her vocation to be the mother of the Holy One (Luke 1:35), we can affirm together that Christ’s redeeming work reached ‘back’ in Mary to the depths of her being, and to her earliest beginnings.
This is not contrary to the teaching of Scripture, and can only be understood in the light of Scripture. Roman Catholics can recognize in this what is affirmed by the dogma - namely “preserved from all stain of original sin” and “from the first moment of her conception.”
60 We have agreed together that the teaching about Mary in the two definitions of 1854 and 1950, understood within the biblical pattern of the economy of grace and hope outlined here, can be said to be consonant with the teaching of the Scriptures and the ancient common traditions.
However, in Roman Catholic understanding as expressed in these two definitions, the proclamation of any teaching as dogma implies that the teaching in question is affirmed to be “ revealed by God” and therefore to be believed “firmly and constantly” by all the faithful (i.e. it is de fide). The problem which the dogmas may present for Anglicans can be put in terms of Article VI:

.
We agree that nothing can be required to be believed as an article of faith unless it is revealed by God.
The question arises for Anglicans, however, as to whether these doctrines concerning Mary are revealed by God in a way which must be held by believers as a matter of faith"
Posted by Unknown at 10:36 pm