A Celebration of Poverty 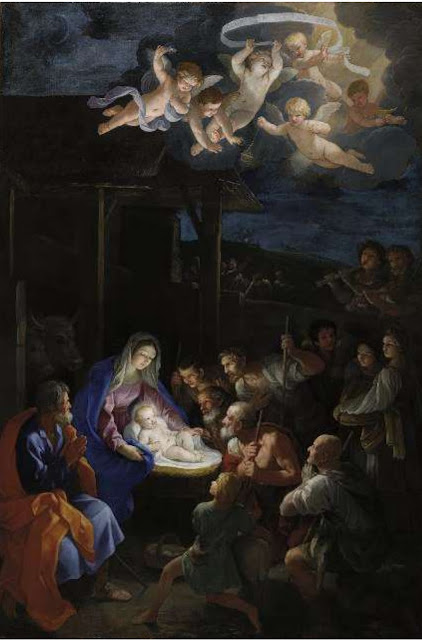 Guido Reni 1575 - 1642
The Adoration of the Shepherds
About 1640
Oil on canvas
480 x 321 cm
The National Gallery, London
This work was possibly commissioned by Prince Karl Eusebius of Lichtenstein (who died in 1684).
The National Gallery acquired it from the Prince`s descendants in 1957.
Before the acquisition, some of the Trustees went to Vaduz to see it. It was in a very dark room. It was decided to take the painting outside. Unfortunately the wind took hold of it and it smashed into a fencepost. The post left a huge hole in the painting next to the head of one of the shepherds.
The National Gallery continued with the purchase no doubt on the well known retail concept of "If you break it, you own it"
After it was repaired the huge work stayed in the same room in the Gallery for nearly fifty years before it went to be restored. It is back after a period of three years in the National Gallery`s "backshop".
It is a late work of Reni`s and probably many of Reni`s assistants were involved in the actual production of the work.
On or about the same time Reni also was commissioned to carry out the same work for the Charterhouse of Saint Martin in Naples. It is still there. (See below) 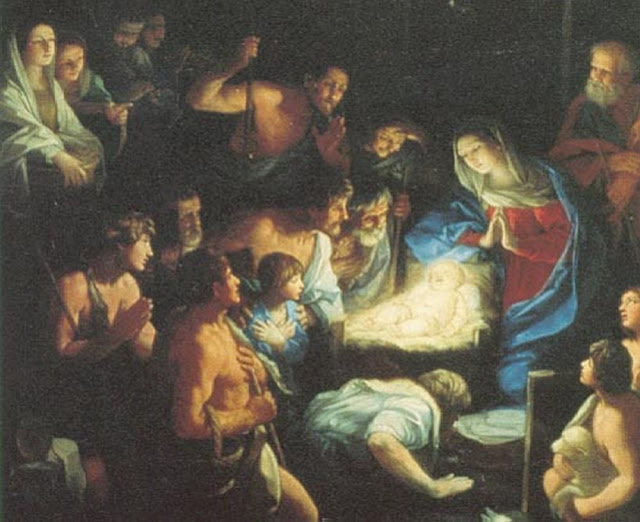 Guido Reni 1575 - 1642
The Adoration of the Shepherds
About 1641
Oil on canvas
485 x 350 cm
Certosa e Museo di San Martino, Naples
It is a classic Nativity scene. Perhaps we are inured to its theme
Years ago, images of such scenes were extremely common especially on Christmas cards. Now such images are much fewer and have to compete with "secular" Christmas cards with no Christian symbols.
In many ways it is quite understandable. The image is counter-cultural to say the least.
In a season now dedicated to conspicuous consumption and self-indulgence, it is almmost a crime to be poor. It is not good marketing therefore to put traditional images to the fore and to bring to customers` minds the uncomfortable idea of poverty.
Yet what Reni depicts is a scene of great poverty and simplicity. It is being glorified. It is being celebrated.
There is absolutely no doubt that the second person of the Trinity chose to be born to a family and setting of great poverty.
At the Presentation at the Temple of Jerusalem when Mary and Joseph brought their first born son to be redeemed, they did not bring a lamb and a turtledove for sacrifice but the poor person`s option: a pair of turtledoves, or two young pigeons (See: Luke 2:22-40 and Leviticus 12)
Pope Benedict XVI discussed this on 1st January 2009 in his Homily in which he referred to his Message for the World Day of Peace entitled: "Fighting poverty to build peace"

"I believe that the Virgin Mary must have asked herself this question several times: why did Jesus choose to be born of a simple, humble girl like me? And then, why did he want to come into the world in a stable and have his first visit from the shepherds of Bethlehem?
Mary received her answer in full at the end, having laid in the tomb the Body of Jesus, dead and wrapped in a linen shroud (cf. Lk 23: 53). She must then have fully understood the mystery of the poverty of God.
She understood that God made himself poor for our sake, to enrich us with his poverty full of love, to urge us to impede the insatiable greed that sparks conflicts and divisions, to invite us to moderate the mania to possess and thus to be open to reciprocal sharing and acceptance."