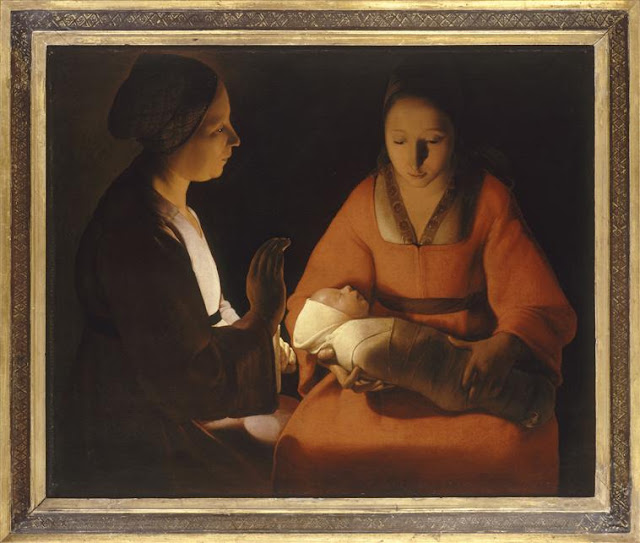 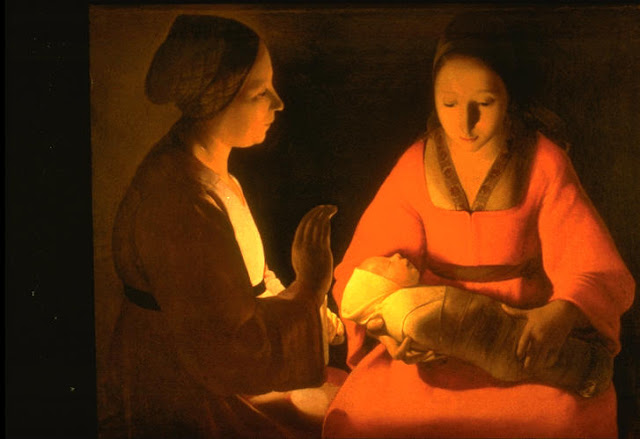 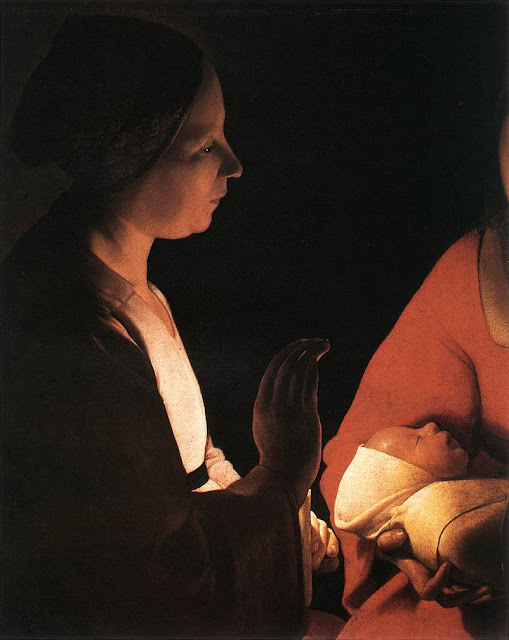 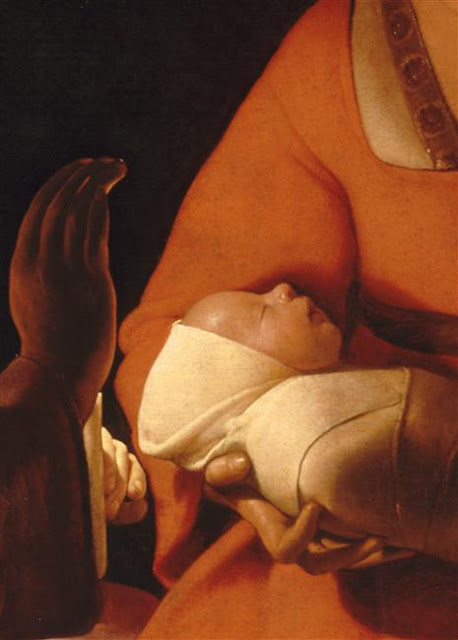 Georges de La Tour
1593-1652
Le Nouveau-né / The New-born
1630 - 1640s
Oil on canvas
76 x 91 cm
Musée des Beaux-Arts, Rennes
One of the most famous works of the Baroque artist, Georges de La Tour, is undoubtedly Le Nouveau-né
It is an ambiguous work. It is not stated if the subject is Mary and the Christ Child with St Anne. But there is more than a suggestion that it is
It was seized in the Revolution in 1794 from the house of a Royalist émigré from Rennes. Hence the lack of definite knowledge as to what it is meant to portray, when it was painted and for whom
It is a deeply tranquil work with the light being provided by an imaginary candle partly hidden by the figure of the servant or is it St Anne ? The artist is most celebrated for his mysterious candle-lit compositions and attracted many less able imitators.
The light shines softly on the head of the infant child almost as if the baby were the source of the illumination
It has been described as a Caravagesque work no doubt because of the chiaroscuro, the light and shadow produced through the setting at night
However the deceptively simple scene is the product of much work and technique which is almost pointilliste: the mother's dress is achieved by minute dots of colour of varying hue, as is the lilac garment of the figure of St Anne/servant.
The gazes of the adult are filled with love and tenderness totally rapt in the miracle of the birth
Through heightened realism. the great attention to detail and the lack of decor depicted in the scene, our attention is firmly fastened on the three figures. The artist`s genius is to endow the humblest figure with religious authority. He is one of the few painters who can convincingly portray and evoke silence
Ambiguity prevails in the picture. The way the mother holds the child is not free from straightforward interpretation. Is there a hint of sadness in her expression ? Is it stretching the point to say that the mother is holding the child in the way of a Pieta ? A prefiguring of a much less happy occasion when her child is place on her lap after being taken down from the Cross ? The scene is timeless not bound by rules of time and place. The work is a meditation rather than a simple genre painting.
Perhaps the following passage from the Pope`s Urbi et Orbi message of last Christmas puts the work into context:

"“The Word became flesh”. The light of this truth is revealed to those who receive it in faith, for it is a mystery of love. Only those who are open to love are enveloped in the light of Christmas. So it was on that night in Bethlehem, and so it is today. The Incarnation of the Son of God is an event which occurred within history, while at the same time transcending history. In the night of the world a new light was kindled, one which lets itself be seen by the simple eyes of faith, by the meek and humble hearts of those who await the Saviour"

A happy Christmas and Good New Year to one and all. Blogging will return in mid January.
Posted by Unknown at 10:37 pm