A Treasure of San Silvestro 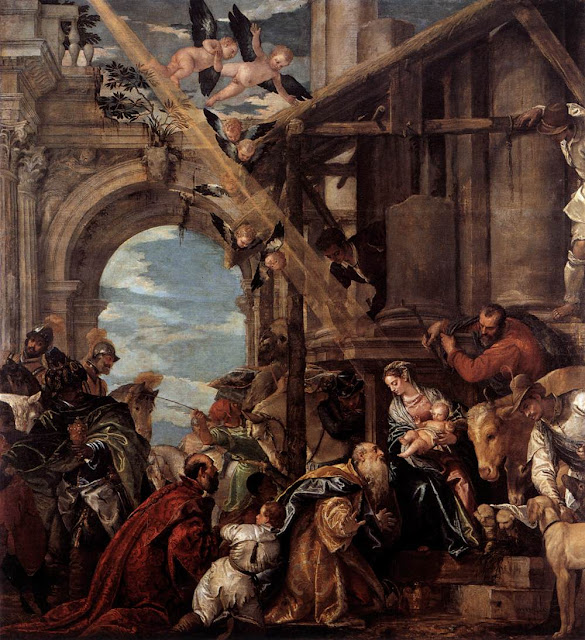 Paolo Veronese (aka Paolo Caliari) 1528 - 1588
The Adoration of the Kings
1573
Oil on canvas
355.6 x 320 cm
The National Gallery, London
Veronese painted this beautiful work in 1573 for the Church of San Silvestro in Venice. There it remained against a wall of the nave beside a chapel of the Confraternity of St Joseph until the middle of the nineteenth century.
When the church was remodelled in the mid 19th century, this and some other works were sold. Purportedly because they were too large for the new setting. Probably simply to raise money for the refurbishment and to replace them with some nineteenth century works.
First it was crated up and brought to Paris where it was to be offered to Baron James Rothschild. However he sold it on and The National Gallery acquired it in 1855 for the princely sum of £1,977 (now £135,000 using RPI to £1,180,000.00 using average earnings) plus £2 2s. 2d. for carriage from Paris
The purchase of the painting did cause some controvery. Questions were asked in "the House".
Hansard for the time reported:

"NATIONAL GALLERY—PICTURE OF "THE ADORATION OF THE MAGI."— QUESTION.HC Deb 14 March 1856 vol 141 c150
§ MR. OTWAY said, he begged to ask the hon. Gentleman the Secretary of the Treasury if it was true that £1,977 had been paid for the picture of "The Adoration of the Magi," recently placed in the National Gallery, and whether that sum included all the expenses occasioned to the country by the acquisition of that picture; by whose recommendation the picture had been purchased, and on what authority it was stated to be painted by Paolo Veronese?
§ MR. WILSON, in reply said, that £1,977 was the whole sum which this picture would cost, with the exception of £2 2s. 2d. paid for its carriage from Paris. All other expenses were paid by the seller. The purchase of the picture was recommended solely by the director of the National Gallery, but was acquiesced in and decided upon by the trustees. Whatever difference of opinion there might be as to the value of the picture, there could, he thought, be none as to its authenticity, for it stood in the position of being, perhaps, the best authenticated picture of the kind in the world. In Venice, where the picture had remained from the time of its being painted up to a very recent date, it was well known to have been the production of Paolo Veronese; and besides that, it was mentioned as his work and as belonging to the church from which it had been taken, in a book which was published in 1581, eight years after the date at which it was painted, and seven years before the death of the artist. In the British Museum there was a print of the picture, which was engraved in the year 1649."

Modern art experts and authorities now consider that perhaps Veronese himself was only responsible for the Virgin and Child. It would seem that it may be that the Virgin and Child together with the rest may have been painted by the followers of Jacopo Bassano.
Veronese also executed a number of variations of the same basic composition, for example showing the foremost wise man kissing Christ's foot
His studio and followers also used the same or a similar composition.
One does wonder who came off best: the church in Venice or the British taxpayer ?
Posted by Unknown at 9:01 pm