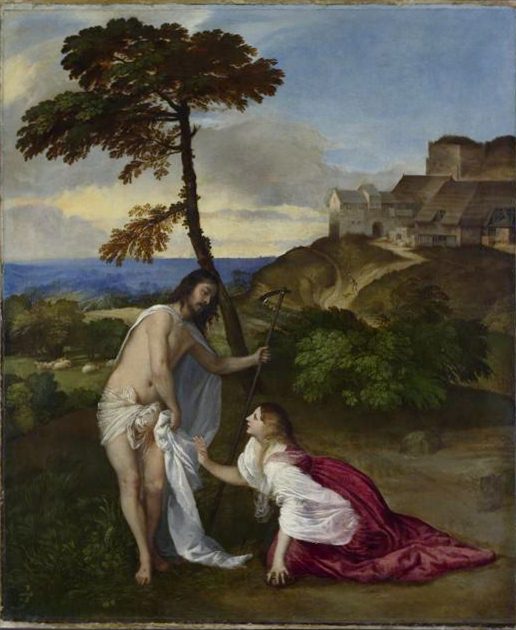 This an early version of one of a number of Noli Me Tangeres painted by Titian.
According to The National Gallery website, X-ray photography has revealed that there was a change in the composition by Titian. Originally the figure of Christ was wearing a gardener`s hat and his face was looking directly away from Mary Magdalene.
The lansdscape is reminiscent of a landscape by Giorgione. Some had thought that the painting had the hand of Giorgione himself. The scene is pastoral and bucolic.
This allows any incidental symbolism in the painting not to intrude: the solitary tree; the sheep; the City on the Hill; the hoe (held like a victory banner)
The main action is the interaction between Christ and Mary Magdalene. That is the focus of the painting.
Both are wearing garments of shining white. In Mary`s case, she is wearing white and purple/red
Mary is kneeling at the feet of Christ. She is not allowed to touch him. There will be no washing of his feet with her tears this time. She had brought unguents for the corpse. These are irrelevant.
She had not recognised him at first. She thought he was the gardener. The painting depicts the time after she recognises him.
Pope Benedict said of this encounter:

"And what can be said of Mary Magdalene? She stood weeping by the empty tomb with the sole desire to know where they had taken her Lord. She encounters him and only recognizes him when he calls her by name. If we seek the Lord with a simple and sincere mind, we too will find him; indeed, he himself will come to meet us; he will make us recognize him, he will call us by name, that is, he will admit us to the intimacy of his love."
(General Audience 11th April 2007)

Each is looking at the other. His gaze towards her is gentle but serious and firm. Her gaze shows her astonished joy and happiness at seeing him after believing him dead.
He is explaining what has happened and why she cannot touch him. He is about to commission her to bring the Good News to the Apostles and disciples. See post below: Noli me tangere >
She is to be the Apostle to the Apostles
She is transformed by her encounter with the Risen Christ:

"The Lord then called [Mary Magdalene] by name and at that point a deep change took place within her: her distress and bewilderment were transformed into joy and enthusiasm. She promptly went to the Apostles and announced to them: "I have seen the Lord" (Jn 20: 18).
Behold: those who meet the Risen Jesus are inwardly transformed; it is impossible "to see" the Risen One without "believing" in him. Let us pray that he will call each one of us by name and thus convert us, opening us to the "vision" of faith.
Faith is born from the personal encounter with the Risen Christ and becomes an impulse of courage and freedom that makes one cry to the world: "Jesus is risen and alive for ever". "
(Pope Benedict XVI, General Audience, 19 April 2006)

Mary can see and hear Christ but cannot touch him. The contrast with his later treatment of "Doubting" St Thomas is noticeable. Thomas sees and hears him yet still doubting is then invited to touch Christ and his wounds.
Titian does not paint Christ in disguise as the manuscript in the post below does (The Hours of the Eternal Wisdom: Lauds). Titian paints him as Mary saw him. We are looking at Him with the eyes of Faith, one of the few to whom Christ revealed himself after the Resurrection and before the Ascension.
In the eyes and the face of the Magdalene, Titian captures the joy and the certainty of one who knows that Christ is risen and is impelled to announce the Good News.
Two years before he died Pope Paul VI wrote a letter to his successor as Pope, then simply Cardinal Albino Luciani, Patriarch of Venice, to commemorate the 400th Anniversary of the Death of Titian (Tiziano Vecellio)
Unfortunately on the Vatican website it is only in Italian.
Paul VI paid a rather passionate and personal tribute to Titian and the immense contribution made by Titian to sacred art and in particular to the instition by him of a new school of Sacred Art. His work, he said, were "quasi una summa pittorica dell’esperienza del grande artista cadorino"
He paid tribute to the many humanistic and works of pagan scenes executed by Titian and his workshop. But he expressed his overwhelming preference for those works of Titian which dealt with a religious or spiritual theme which he said were timeless and eternal and promoted a true Catholic sense of piety or faithfulness and a religiosity to popular Catholic devotion and Renaissance aesthetic sentiment.