The Baptism of the Eunuch of the Queen of Ethiopia 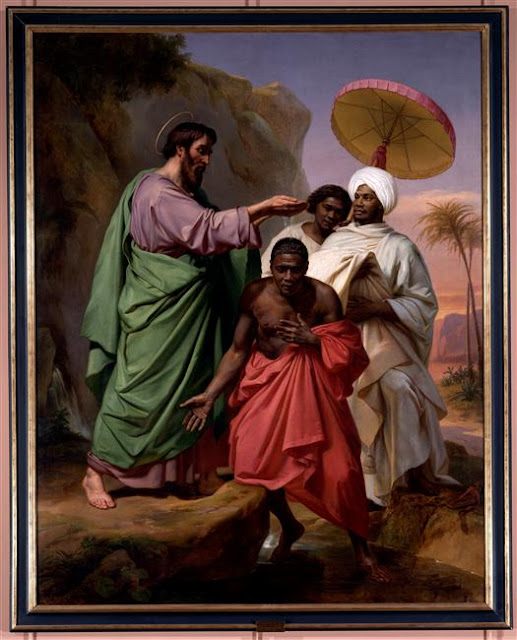 Alexandre-Denis Abel de Pujol (1787-1861)
Saint Philippe baptisant l'eunuque de la reine d'Ethiopie sur le chemin de Jérusalem à Gaza
Saint Philip baptising the Eunuch of the Queen of Ethiopia on the road from Jerusalem to Gaza
1848
Oil on canvas
2.4 x 3.06 metres
Musée des Beaux-Arts, Valenciennes
De Pujol was a pupil of David and a very successful religious and historical painter all through the first part of the 19th Century. He executed public murals for the Louvre, Saint Sulpice, the Bourse, the Eglise Saint-Etienne-du-Mont and others.
The season for Baptism approaches. The above painting is quite apposite. The treatment of the subject is quite different from that of Lorrain and others.
The subject comes from the Acts of the Apostles (VIII, 26–40). It tells of St Philip on the road meeting a man of Ethiopia, ‘an eunuch of great authority under Candace queen of the Ethiopians’, whose chariot he shares while discussing Isaiah.
Having established that Jesus is the one foretold by the prophet, Philip stops at some water to baptise the eunuch in His name.
The newly converted then "went on his way rejoicing." The reaction to the reception of the Gospel and Baptism is Joy.
The eunuch did not understand the passage from Isaiah:

"He was led like a sheep to the slaughter, and as a lamb before the shearer is silent, so he did not open his mouth.
In his humiliation he was deprived of justice. Who can speak of his descendants? For his life was taken from the earth."

Philip explained and expounded the Gospel.
St Augustine in On Christian Doctrine uses this passage from Acts to illustrate the importance of human agency (and not Divine) in the exposition of Scripture and the proper preaching and interpretation of Scripture:

"And we know that the eunuch who was reading Isaiah the prophet and did not understand what he read, was not sent by the apostle to an angel, nor was it an angel who explained to him what he did not understand nor was he inwardly illuminated by the grace of God without the interposition of man. On the contrary, at the suggestion of God, Philip who did understand the prophet came to him and sat with him and in human words and with a human tongue opened to him the Scriptures." (On Christian Doctrine, Preface 7)

The remission of sins takes place by virtue of the Grace or Charity of the Holy Spirit
The episode also narrates how the Apostles in the early church began baptising Gentiles. In this way, the episode shows the authority of the Church to expand the mission of Christ to “all nations” (Mt 28:16) under the Great Commission:

"The reason [for this formula] is as follows. Regeneration [which baptism brings about] involves three things: that in view of which it is done, that through which it is done, and that whereby it is achieved.
In view of what [is one baptized]? In view of God the Father, as the Apostle says in Romans 8.29: For whom he did foreknow, he also did predestine to be conformed to the image of his Son . . . .
Through what [are we baptized]? Through the Son: God has sent his Son . . . so that we may receive adoption as sons of God (Gal. 4.4–5), for it is by adoption to the image of the one who is Son by nature that we are made sons.
Whereby [are we baptized]? In the gift of the Holy Spirit, which we receive: You have not received the spirit of bondage again to fear; but ye have received the Spirit of adoption, whereby we cry Abba, Father (Rom. 8.15).
So it is suitable to mention the Father, the Son and the Holy Spirit." (In Matt. 28.19 (. 2465))

In his recent talk on Saints and Holiness Pope Benedict XVI said:

"[T]he question remains: How can we journey on the path of holiness, how can we respond to this call? Can I do so with my own strength?
The answer is clear: A holy life is not primarily the fruit of our own effort, of our actions, because it is God, the thrice Holy (cf. Isaiah 6:3), who makes us saints, and the action of the Holy Spirit who encourages us from within; it is the life itself of the Risen Christ, which has been communicated to us and which transforms us.
To say it again according to Vatican Council II:

"The followers of Christ are called by God, not because of their works, but according to His own purpose and grace. They are justified in the Lord Jesus, because in the baptism of faith they truly become sons of God and sharers in the divine nature. In this way they are really made holy. Then too, by God's gift, they must hold on to and complete in their lives this holiness they have received" (ibid., 40).

Hence, holiness has its main root in baptismal grace, in being introduced into the paschal mystery of Christ, with which his Spirit is communicated to us, his life as the Risen One.
St. Paul points out the transformation wrought in man by baptismal grace and even coins a new terminology, forged with the preposition "with":

"We were indeed buried with him through baptism into death, so that, just as Christ was raised from the dead by the glory of the Father, we too might live in newness of life" (Romans 6:4).

However, God always respects our liberty and asks that we accept this gift and that we live the demands it entails. He asks that we allow ourselves to be transformed by the action of the Holy Spirit, conforming our will to the will of God."