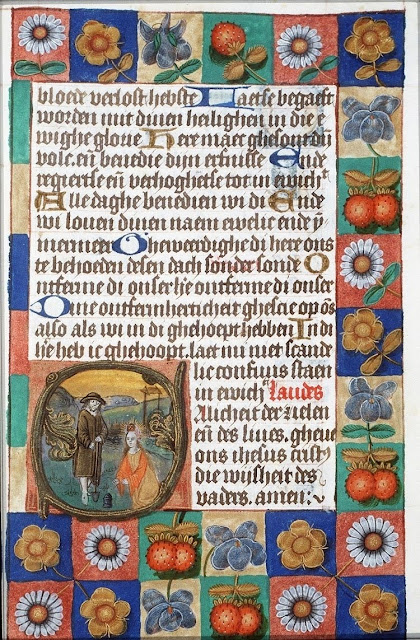 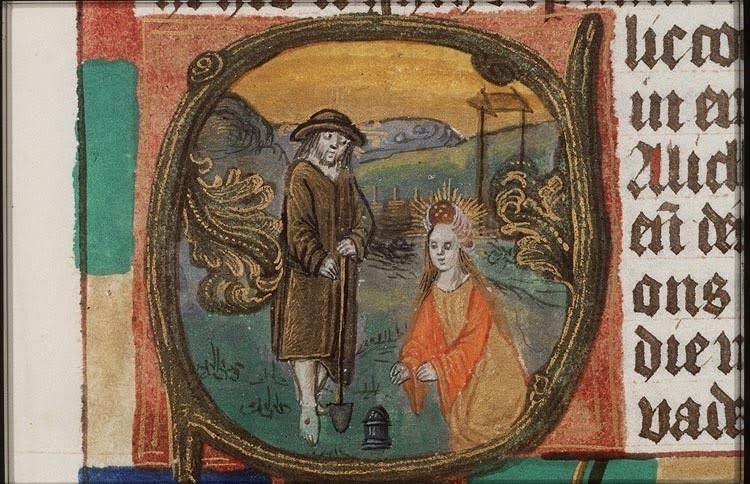 Masters of the Dark Eyes (illuminator)
Active c 1490
Christ appears to St. Mary Magdalene as a gardener
From The Hours of the Eternal Wisdom: Lauds
Fol. 88r, The Hague, KB, 76 G 9
Vellum, 195 x 135 mm,
Koninklijke Bibliotheek: National Library of the Netherlands, The Hague
Mary Magdalene was the first person to see Jesus after he rose from the dead

"11 But Mary stood weeping outside the tomb, and as she wept she stooped to look into the tomb. 12 And she saw two angels in white, sitting where the body of Jesus had lain, one at the head and one at the feet. 13 They said to her, "Woman, why are you weeping?"
She said to them, "They have taken away my Lord, and I do not know where they have laid him."
14 Having said this, she turned around and saw Jesus standing, but she did not know that it was Jesus. 15 Jesus said to her, "Woman, why are you weeping? Whom are you seeking?" Supposing him to be the gardener, she said to him, "Sir, if you have carried him away, tell me where you have laid him, and I will take him away."
16 Jesus said to her, "Mary." She turned and said to him in Aramaic, "Rabboni!" (which means Teacher). 17 Jesus said to her, "Do not cling to me, for I have not yet ascended to the Father; but go to my brothers and say to them, 'I am ascending to my Father and your Father, to my God and your God.'"
18 Mary Magdalene went and announced to the disciples, "I have seen the Lord"—and that he had said these things to her."
John 20: 11 - 18

Noli me tangere, meaning "don't touch me" / "touch me not", is the Latin version of words spoken by Jesus to Mary according to St John`s Gospel.
The original phrase in the Gospel written in Greek, is said to be better represented in translation as "cease holding on to me" or "stop clinging to me".
The verse has given rise to a great deal of theological discussion particularly because of the reason Jesus gives Mary why she should not touch him "for I have not yet ascended to the Father" 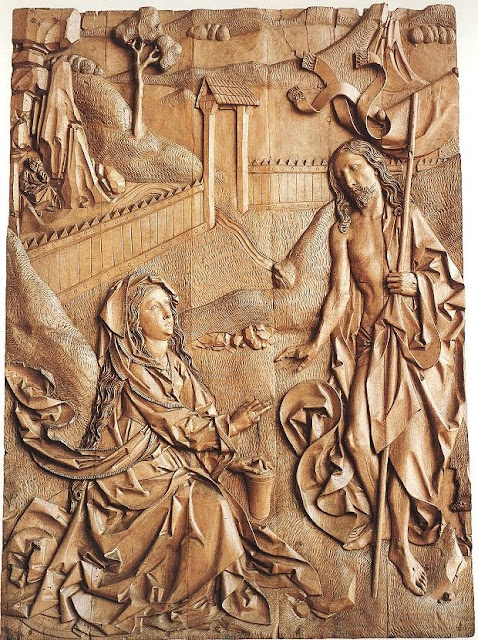 Tilman Riemenschneider ca. 1460 - 1531
Noli me tangere 1490-92
Limewood
Parish Church, Münnerstadt
Riemenschneider’s retable for the parish church of Mary Magdalen in Münnerstadt centered on Mary Magdalen. Some of the retable was removed and sold to public collections. In the 1980s the altarpiece was restored. See below 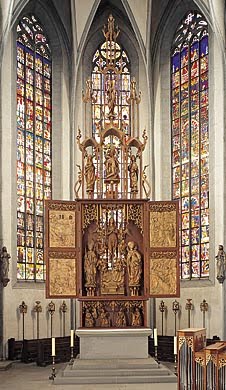 Modern high altar with some of Riemenschneider's original elements
Church of Mary Magdalen, Münnerstadt
For more about the altarpiece and the sculptor see The National Gallery website (Washington DC)
Posted by Unknown at 9:11 pm