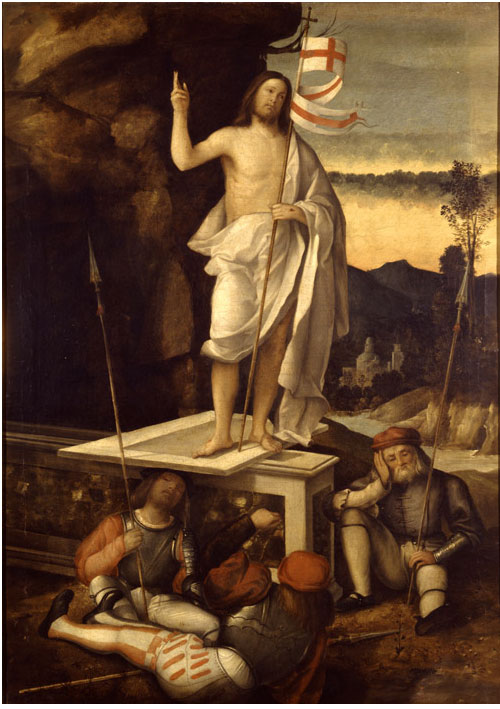 Marco Basaiti (active 1496-1530 in Venice)
The Resurrection of Christ
1520
Oil on canvas,
140 x 100 cm
Accademia Carrara, Bergamo
Basaiti was a Venetian Greek (of Albanian extraction, perhaps) painter and a rival of Giovanni Bellini
But towards 1500-10 he sometimes approached rather closely the style of Giovanni Bellini. Some writers believe that at one time he was the pupil of Bellini
The facts of Basaiti`s life are indeed obscure
However his faith and works live on.
The Resurrection of Christ is a historical fact. It was accepted as such by Basaiti and his contemporaries. That did not of course stop them asking questions about this Mystery.
One area of discussion was what was the nature of Christ`s resurrected body. How does one depict the corporeal presence of Christ after the Resurrection ?
The differences with an ordinary human body in a normal human scene are emphasised.
Christ is standing on the broken tomb. His feet are quite firmly planted on the lid of the tomb. His pose is one of victory. He is holding the banner of victory.
The Roman soldiers of the Roman State which executed him are shown at his feet sleeping, their weapons useless. The contrast between the figure of Christ and the three Roman soldiers is quite stark.

At the time of the Crucifixion and Resurrection, the Roman State was the most powerful human institution in the world, one of the greatest and most powerful in all of human history with its foundations in a pagan culture. We still admire it today as one of the high points of human achievement.

At the time of this painting, Basaiti and his contemporaries knew that this power was only temporary. Indeed Constantinople "the New Rome" had fallen within human memory.

Christ`s figure is luminous compared to the treatment of the three Roman soldiers sent to guard the tomb.
Christ is pointing heavenwards. He is wearing a gleaming white sheet, his death sheet which has become quite transformed.
The scene takes place in semi darkness just before the dawn or at dawn. THe time and place are vague. Christ`s figure lights up the painting.
Historically the actual moment of Resurrection was not depicted in Christian art. This was a later development.
The Catechism sheds some light on the nature of Christ`s resurrected body. It is not a ghost they are seeing or a figment of the imagination of Mary Magdalene or the Apostles and disciples
From the Catechism one can see the difficulties faced by Basaiti and others in depicting the Resurrected Christ:

"The condition of Christ's risen humanity
645 By means of touch and the sharing of a meal, the risen Jesus establishes direct contact with his disciples. He invites them in this way to recognize that he is not a ghost and above all to verify that the risen body in which he appears to them is the same body that had been tortured and crucified, for it still bears the traces of his Passion.
Yet at the same time this authentic, real body possesses the new properties of a glorious body: not limited by space and time but able to be present how and when he wills; for Christ's humanity can no longer be confined to earth, and belongs henceforth only to the Father's divine realm.
For this reason too the risen Jesus enjoys the sovereign freedom of appearing as he wishes: in the guise of a gardener or in other forms familiar to his disciples, precisely to awaken their faith.
646 Christ's Resurrection was not a return to earthly life, as was the case with the raisings from the dead that he had performed before Easter: Jairus' daughter, the young man of Naim, Lazarus. These actions were miraculous events, but the persons miraculously raised returned by Jesus' power to ordinary earthly life. At some particular moment they would die again.
Christ's Resurrection is essentially different. In his risen body he passes from the state of death to another life beyond time and space. At Jesus' Resurrection his body is filled with the power of the Holy Spirit: he shares the divine life in his glorious state, so that St. Paul can say that Christ is "the man of heaven"."