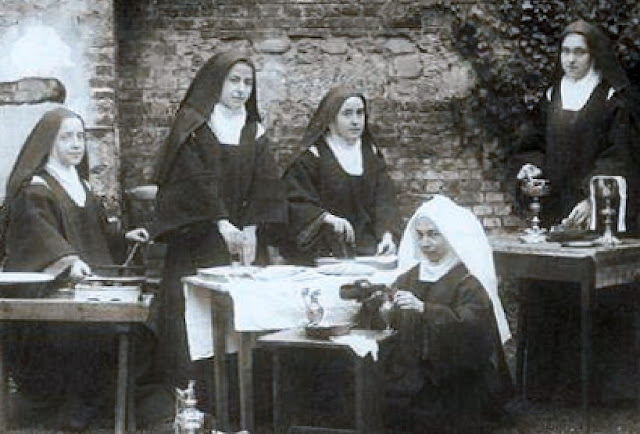 Saint Thérèse of Lisieux with her sisters and a cousin: November 1896
Last Wednesday Pope Benedict continued his catechesis on Doctors of the Church. This talk was on Saint Thérèse of Lisieux
A great saint and Doctor who appears on the face to be simple but whose writings are multi-faceted
Pope Benedict XVI described her as a " guide for all, above all for those who among the People of God carry out the ministry of theologian."
He continued:

"With humility and charity, faith and hope, Thérèse entered continually into the heart of sacred Scripture, which contains the Mystery of Christ.
And this reading of the Bible, nourished by the science of love, is not opposed to academic science. The science of the saints, in fact, of which she speaks in the last page of the "Story of a Soul," is the highest science:

"All the saints have understood it and in particular, perhaps, those who filled the universe with the radiation of the evangelical doctrine. Is it not, perhaps, through prayer that Sts. Paul, Augustine, John of the Cross, Thomas Aquinas, Francis, Dominic and so many other illustrious Friends of God obtained this divine science that fascinates the greatest geniuses" (Ms C, 36r).

The above photograph shows her dealing with the Eucharistic vessels. It is quite a famous photograph of the Carmelite saint.
Of the Saint`s devotion to the Eucharist, the Pope reminded us:

"Inseparable from the Gospel, the Eucharist was for Thérèse the sacrament of Divine Love that descends to the extreme to lift us to him. In her last Letter, the saint wrote these simple words on the image that the Child Jesus represents in the consecrated Host:

One theme in her writings is the need for priests «who know how to love Jesus, who touch Him with the same delicacy with which Mary used to touch Him in the cot!» (LT 101).
On 17th July 1890 she received a very sad letter from her sister Celine:

«The other day we entered by chance a very poor small church (…). I could not hold back my tears. Can you imagine?: a Tabernacle without curtains, a real black hole, perhaps a place full of cobwebs, and a ciborium which was so poor that it looked like copper covered with a piece of dirty material which no longer had the shape of a veil for the Holy Eucharist. And there was only one host in the ciborium. Alas, they do not need any more things like those in that parish. There was not even one communion a year outside the time of Easter. In these parts of the countryside there are rough priests who keep the church closed all day. Besides they are old and have no resources…».

The next day whilst her sister was concerned about buying a new pyx and at the Carmelites they were preparing an embroidered veil, Theresa answered by quoting long passages taken from the Carmelites of the suffering Servant of Jahve, on the hidden beauty of the humiliated Face of Jesus who expects to be recognised and loved. She exhorted her sister by saying:

«Let’s have a small Tabernacle in our heart, where Jesus can take shelter. Then He will be consoled and will forget what we cannot forget: the ingratitude of the souls who abandon Him in a deserted tabernacle! (…). Celine, let’s pray for priests, ah, let’s pray for them! May our life be consecrated to them: every day Jesus makes me feel that He wishes this from us both» (LT 108).

Popes Benedict and (Blessed) John Paul II have and had a particular regard for Saint Thérèse
It is also worthwhile recalling that previous Popes have had a similar high regard. One of these was Pope Pius XI ("the Pope of the Mission"). He presided over her canonisation in 1925.  He proclaimed her the perpetual protectress of the Society of Saint Peter the Apostle on 23 July 1925.
Two years later he named her principal patroness of the missions in the whole world, on an equal footing with St. Francis Xavier. He attributed his recovery from ill health to the Saint ( Letter to Cardinal E. Pacelli, Osservatore Romano, September 5, 1937), and recorded this formally in his Encyclical Ingravescentibus Malis (26 September 1937)
Posted by Unknown at 6:32 pm