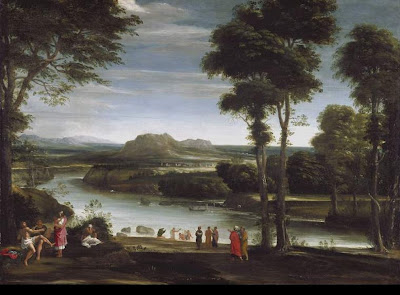 
" The Baroque period took for granted a belief in a future perfection and transfiguration of life, and this faith, instinct with hope, so far from damping in any way its enjoyment of the natural life, precisely gave to that life its value and price. Hence the joyousness, the splendour, the flood of light in which baroque art clothes even this earthly existence ; hence the cheerful affirmation of all reality, including that of matter ; hence the ease with which every natural means of expression was pressed into the service of religious art; hence the disappearance of all strict boundaries between the world above and that below, since everyone was convinced that there was no gap between spirit and matter, between nature and the supernatural, between heaven and earth; that, on the contrary, the one builds on the other, that, in fact, they complete each other. And the result was that all the positive forces of the civilization of that period, whether of a material, spiritual or a religious kind, worked together for the building up of this art, thus making of it a mirror of the harmonious culture of a whole period."
From Weingartner, Der Geist des Barock, Augsburg, 1925, 24.

On the other hand, John Ruskin (1819-1900) despised the Italian baroque painting of the 17th century - the seicento. He had a puritanical loathing and mistrust of its lushness, religiosity and emotionalism. His views were immensely potent.
He wrote that Domenichino was "palpably incapable of doing anything good, great or right in any field, way, or kind, whatsoever." About Italian seicento painting in general, he wrote, "There is no entirely sincere or great art in the 17th century."
It was Ruskin's fundamental belief that understanding came from close observation and could be enhanced by the hand copying what the eye could see
In a memorable passage in Modern Painters (1843-60) he wrote that young painters should “go to Nature in all singleness of heart…having no other thoughts but how best to penetrate her meaning, and remember her instruction; rejecting nothing, selecting nothing, and scorning nothing.”
His views were immensely potent. When the National Gallery bought two paintings by the baroque artist Guido Reni, Ruskin condemned the purchase so fiercely that the gallery did not dare buy another seicento work for over half a century.
For Ruskin, Italian Baroque was the art of the counter Reformation, the Roman Catholic backlash against Protestantism.
The main critique of Ruskin was that there was no genuine feeling behind Italian Baroque. Like Friedrich Nietzsche, in Menschliches Allzumenschliches (1878, Aphorism 144), he thought that “the Baroque style arises every time at the waning of every great art.”
It was a sign of national decline and decadence.
Posted by Unknown at 1:24 pm