The Religious Sensibility of Beardsley 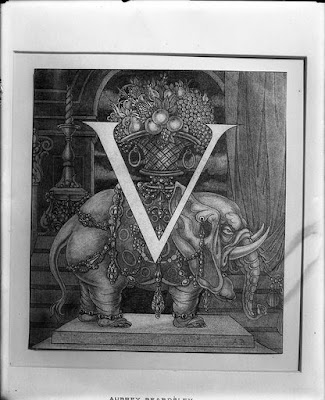 But to ignore the religious side of Beardsley is to ignore the most important part of his character. No one is advocating his canonisation.

But perhaps his early death deprived the Catholic Church of an important religious artist.

In 1895 Arthur Symons met Beardsley at Dieppe. In 1966 he recalled one of their meetings that summer:

"It was on the balcony or the Hôtel Henri IV at Arques, one of those September evenings, that I had the only quite serious, almost solemn, conversation I ever had with Beardsley. Not long before we had gone together to visit Alexandre Dumas fils at Puy, and it was from talking thoughtfully, but entirely, of that Parisian writer, and his touching, in its unreal way so real, Dame aux Caméllias (the novel, not the play), which Beardsley admired so much, that we passed into an unexpectedly intimate mood of speculation.

Those stars up yonder, whether they were really the imprisoning worlds of other creatures like ourselves ; the strange ways by which the soul might have come and must certainly go ; death and the future : it was of such things that I found him speaking, for once without mockery. And he told me then a singular dream or vision which he had had when a child, waking up at night in the moonlight and seeing a great crucifix, with a bleeding Christ, falling off the wall, where certainly there was not, and had never been, any crucifix.

It is only by remembering that one conversation, that vision, the tone of awe with which he told it, that I can, with a great effort, imagine to myself the Beardsley whom I knew, with his so positive intelligence, his imaginative sight of the very spirit of man as a thing of definite outline, transformed finally into the Beardsley who died in the peace of the last sacraments, holding the rosary between his fingers."

One of the key figures in the conversion of Beardsley was Marc-André Raffalovich (11 September 1864 – 1934), a French poet and patron of the arts. In 1896, he converted to Catholicism and and joined the tertiary order of the Dominicans as brother Sebastian

By way of background Beardsley moved to a guest house in Bournemouth on the English South Coast. The guest house was known as Muriel (also called Cheam House) in Exeter Road, which stood just off Bournemouth Square and was demolished as recently as 1995.

Father Bearne appears to have been a Jesuit priest at the local Church, the Sacred Heart Church which was opened in 1875. The building was designed by the architect Clutton. Its architecture is a mixture of neo-gothic and neo-Norman influences, popular in Victorian times.

Very many thanks indeed for your little line and kind enclosure

This morning I was received by dear Father Bearne into the Church, making my first confession, with which he helped me so kindly. My first communion will be made next Friday. I was not well enough to go up to the church, and on Friday the Blessed Sacrament will be brought me here. This is a very dry account of what has been the most important step in my life, but you will understand fully what those simple statements mean. I don`t feel I can write a long letter today.

Your letter has just arrived. I am touched more than I can say with all your loving sympathy.

I am feeling so happy now.

Goodbye my dear friend and brother, and with the deepest gratitude for all your prayers.

I am ever yours most affectionately
Aubrey Beardsley"

"My dearest Friend and Brother,
...
Father Bearne. came to see me this afternoon, & brought me such a dear little Rosary, that had been blessed by the Holy Father. He explained to me the use of it. I feel now, dear André, like some one who has been standing waiting on the doorstep of a house upon a cold day, & who cannot make up his mind to knock for a long while. At last the door is thrown open & all the warmth of kind hospitality makes glad the frozen traveller. ..."


Then after his First Communion he wrote:

My dear André, my dear Brother,

The Blessed Sacrament was brought to me here this morning. It was a moment of profound joy, of gratitude and emotion. I gave myself up entirely to feelings of happiness, and even the knowledge of my own unworthiness only seemed to add fuel to the flames that warmed and illuminated my heart.

Oh how earnestly I have prayed that the flame may never die out !

My dear André, I understand now so much you have written to me that seemed difficult before. Through all eternity I shall be unspeakably greatful to you for your brotherly concern for my spiritual advancement.

This afternoon I have felt a little sad at the thought of my compulsory exile from Church just now; and that the divine privilege of praying before the Blessed Sacrament is not permitted me.

You can guess how I long to assist at Mass, and you will pray, I know, that I may be strong enough to do so.

I am yours very affectionately
Aubrey Beardsley"
Posted by Unknown at 5:46 pm