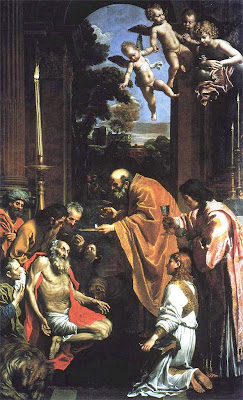 Domenico Zampieri ( Domenichino) 1581-1641
The Last Communion of St Jerome, 1614
Oil on canvas
cm. 419 x 256
The Vatican Museum, Vatican City
When pilgrims visit St Peter`s Basilica in Rome many go to venerate the tomb of Blessed Pope John XXIII.
He lies at the Altar of St Jerome. 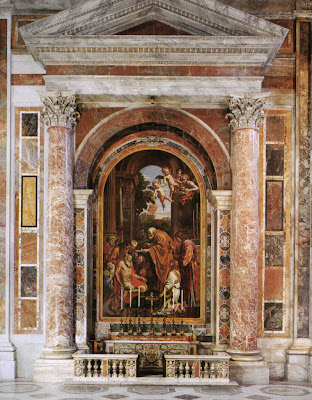 The Altar of St Jerome, St Peters Basilica, Vatican
Above the body of the Blessed Pope and the altar is a copy of a masterpiece: Domenichino`s The Last Communion of St Jerome. The copy above the altar is a mosaic copy of 1730.
The original is in the Vatican Museums.
The aged saint receives communion from Saint Ephrem in the monastery of Bethlehem. Kneeling in the act of kissing the hand of the dying man is the profile of Saint Paula of Rome, one of the great Biblical scholar's favourite disciples
After it was excuted and for a long time thereafter it was regarded as one of the world`s masterpieces, surpassed only by Raphael`s The Transfiguration
The painting was seized by Napoleon. In the nineteenth century it was returned to the Vatican
It was commissioned from Domenichino by the Compagnia della Charità (Confraternity of Charity) for the main altar of the Church of San Girolamo della Carità in Rome in 1614.
The Church reputedly was built on the site where St Jerome and his disciples lived in Rome in AD 382 and there had reputedly been a church on that site since the 4th Century,
The Confraternity was set up in 1551. Between 1551 and 1583 Saint Philip Neri played an active part in the life of the Confraternity and lived in St Jerome of Charity where the Congregation of the Oratory was created. The Church was the first centre of the pastoral activity of St Philip Neri. His initiation of the Forty Hours "Quarant`ore" took place at that Church. There was pressure to have an appropriate monument as St Philip Neri was due to be beatified as he was by Paul V in 1615
The Confraternity had many charitable functions in the Rome of that day particularly amongst prisoners.Clement VIII had provided in 1603 that on the Feast day of St Jerome, the Confraternity had the right to ask for and obtain the release of any prisoner condemned to death (apart from certain crimes). This right lasted until 1815
The commission was therefore an important one.
For Domenichino it was his first commission of an altarpiece for a high altar.
He did a great deal of preparation.
He visited Bologna to see the painting by Carracci (see below) which was on the same theme. He took drawings of it. This was later to bring about charges of plagiarism against him by a jealous rival. 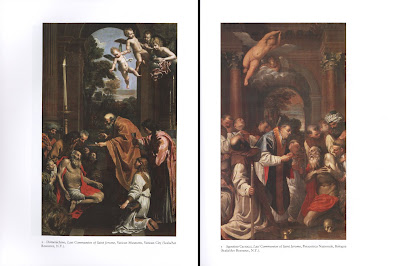 A comparison between the versions by Domenichino and Carracci
The number of studies and preparatory drawings which he made were legion.
He consulted his friend Monsignor Agucchi a great deal about all aspects of the work
The result is a triumph of Counter Reformation Art.
Note:
- the central role of the Eucharist in the painting. In Carracci`s painting, the Eucharist is partially obscured
-both forms of the Eucharist are being held by priests: not so in Carracci`s version
-the story of the Last Communion of St Jerome is based on a medieval forgery which was exposed by Erasmus at the time of the reformation: Erasmus is ignored. Eventually nearly all of his works would be put on the Index
-the other central figure of St Jerome: the penitent, the celibate, the advocate of perpetual virginity, the scholar, the railer against heresy and heretics, the great translator and compiler of the Vulgate, the scholar, the great saint who acted in obedience to the Popes of his day, the monk, the ascetic
-the humility and piety of St Jerome kneeling before the Eucharist
Posted by Unknown at 9:54 pm