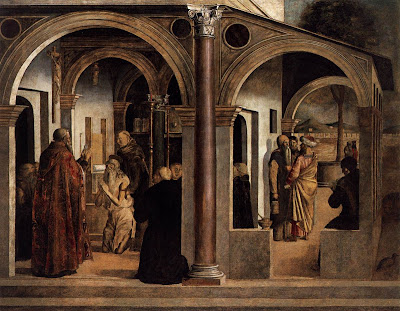 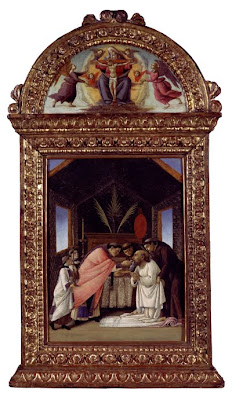 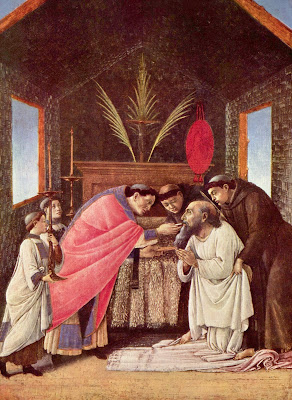 A feature of the Renaissance humanists was their enthusiasm for the writings of the Church Fathers, especially St Jerome.
The Fathers, as products of the ancient world, could be seen as bridges between the two cultures that informed humanism: pagan antiquity and Christianity.
The scholar and multilingual Jerome, the penitent and the student of Scripture appealed to the intellectual side of the Renaissance.
Erasmus edited the letters of St Jerome in four volumes which were published in 1516. He also produced an edition of the works of Saint Jerome,and a biography of the Saint
In 1920 in Spiritus Paraclitus (15th September 1920), Pope Benedict XV described St Jerome as the Church`s " `Greatest Doctor` divinely given her for the understanding of the Bible."
According to legend, the Saint refused to receive his last communion in bed but insisted on getting up and kneeling to receive the Eucharist, thus demonstrating his humility before Christ.
On last Communion, St. Jerome warned that it was "dangerous to try to get to heaven without the Bread of Heaven."
St Jerome made a number of statements on the Eucharist:
"Far be it from me to speak adversely of any of these clergy who, in succession from the Apostles, confect by their sacred word the Body of Christ, and through whose efforts also it is that we are Christians… (Letter of Jerome to Heliodorus)"
"The flesh and blood of Christ is understood in two ways; there is either the spiritual and divine way, by which He Himself said: "My flesh is truly food, and my blood is truly drink"; and "Unless you shall have eaten my flesh and drunk my blood you shall not have eternal life." Or else there is the flesh and blood which was crucified and which was poured out by the soldier's lance. (Commentaries on Ephesians 1:1:7)"
"After the type had been fulfilled by the passover celebration and He had eaten the flesh of the lamb with His Apostles, He takes bread which strengthens the heart of man, and goes on to the true Sacrament of the passover, so that just as Melchisedech, the priest of the Most High God, in prefiguring Him, made bread and wine an offering, He too makes Himself manifest in the reality of His own Body and Blood. (Commentaries on Matthew 4:26:26)"
The Last Communion of St Jerome is a theme not found often in religious art.
As regards the painting by Bastiani, in the second half of the fourteenth century, Augustinian nuns erected a church in the district of Cannareggio in Venice and dedicated the sacristy and a confraternity to St Jerome.

In the painting by Bastiani, the saint is supported by his friend and disciple Eusebius and surrounded by the brethren.

As regards the work by Botticelli, the frame on the Botticelli picture was carved in the workshop of Giuliano da Maiano. Its painted lunette is by Bartolomeo di Giovanni.