The Second Apostle of Germany

There has been concern in many circles about what has been happening and what is being taught in some Faculties of Theology for some time. For various reasons.
On 14 October 2008 in a homily to the Synod of Bishops assembled in Rome to discuss Scripture, the Pope said this about the interpretation of Scripture and singled out "mainstream" German opinion:

"According to this hermeneutics, when there seems to be a divine element, the source of that impression must be explained, thus reducing everything to the human element. As a result, it is the grounds for interpretations that deny the historicity of divine elements.
Today the exegetical "mainstream" in Germany, for example, denies that the Lord instituted the Holy Eucharist and says that Jesus' corpse remained in the tomb. The Resurrection in this view would not have been a historical event but a theological view.
This happens because the hermeneutics of faith is missing: profane philosophical hermeneutics is affirmed instead, which deny the possibility of the entrance and presence of the Divine in history. The result of the absence of the second methodological level is what has created a profound fissure between scientific exegesis and Lectio divina.
From precisely this point there sometimes also arises a sort of perplexity in regard to the preparation of homilies. When exegesis is not theological, Scripture cannot be the soul of theology, and vice versa; when theology is not essentially Scriptural interpretation within the Church, then this theology no longer has a foundation."

At the same Synod, Cardinal Claudio Hummes illustrated the problem by an anecdote:

"Once, years ago, a colleague of mine, a doctor of theology and a professor, was shaken by what he had read about the Resurrection of Christ in some theological and exegetic books.
They questioned this fundamental dogma of our faith in many aspects and emptied it, for the most part, of its true content, in a worrying way. He told me about his loss. It was the day before Easter. He asked me: “Tomorrow is Easter. What will I say to the people about Resurrection?”
I immediately answered him: “You will have to proclaim that Jesus Christ is risen and lives! Period.” And his response: “This is true! That is it!” And he left, happy once again.
This episode makes one think about the urgent need to give our presbyters and deacons good theology and a true exegetical method. As to the exegetical method, Pope Benedict XVI indicates the direction to follow in the Preface of his book “Jesus of Nazareth""

The Archbishop of Ottawa, Terrence Thomas Prendergast SJ at the Synod said:

"The topic is Instrumentum Laboris #17 concerning the difficulty many Catholics have with the Old Testament.
I propose that the Synod explore the loss of confidence among Catholics that Scripture truly communicates God's revelation; reflect on how this may have been brought about by the influence of modern biblical scholarship on preaching; and renew the Church's understanding of the spiritual sense of Scripture as a remedy."

In Theologians and Saints, the Swiss theologian the late Hans Urs von Balthasar (who was close to the Holy Father and nominated to be a cardinal before his death by Blessed Pope John Paul II) wrote:

"In the whole history of Catholic theology there is hardly anything that is less noticed, yet more deserving of notice, than the fact that, since the great period of Scholasticism, there have been few theologians who were saints"

He went on to say:

"If we consider the history of theology up to the time of the great Scholastics, we are struck by the fact that the great saints, those who not only achieved an exemplary purity of life, but who also had received from God a definite mission in the Church, were, mostly, great theologians. They were "pillars of the Church", by vocation channels of her life: their own lives reproduced the fullness of the Church's teaching, and their teaching the fullness of the Church's life.
This is the reason for their enduring influence: the faithful saw in their lives an immediate expression of their teaching and a testimony to its value, and so were made fully confident in the rightness of teaching and acting.
It also gave the teachers themselves the full assurance that they were not deviating from the canon of revealed truth; for the complete concept of truth, which the gospel offers us, consists precisely in this living exposition of theory in practice and of knowledge carried into action"

This week saw the publication of a petition by German speaking professors from various Catholic Faculties of Theology. Perhaps it was just a coincidence that this week`s Wednesday catechesis by the Pope was on the life and works of the great German Jesuit saint, theologian and Doctor of the Church, Saint Petrus Canisius (8 May 1521 – 21 December 1597), the Second Apostle of Germany.
St Petrus Canisius has been the subject of a Papal works before: Leo XIII wrote Militantis Ecclesiae (1st August 1897) and on 19 September 1997, Blessed Pope John Paul II wrote to the German Bishops about the Saint 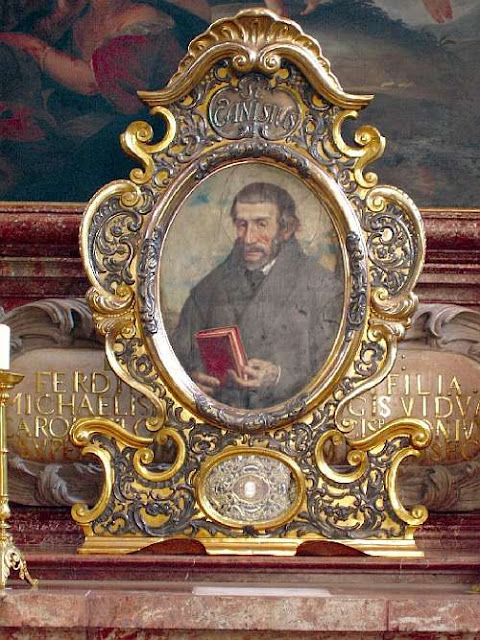 St Peter Canisus, founder of the Innsbruck Jesuit College as depicted in The Church of the Most Holy Trinity (University Church), Innsbruck
Source 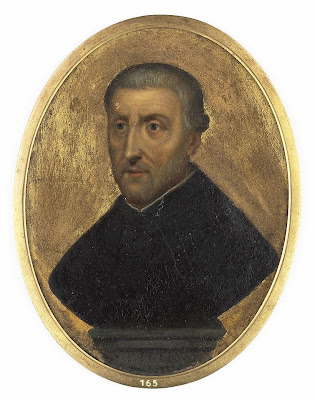 "He [St Petrus Canisius] is really the catechist of the centuries; he formed people's faith for centuries.
This is a characteristic of St. Peter Canisius: to be able to harmoniously combine fidelity to dogmatic principles with respect due to every person.
St. Canisius differentiated a knowing, culpable apostasy from a non-culpable loss of faith, in the circumstances. And he declared, before Rome, that the greater part of Germans who went over to Protestantism were without fault.
At a historical moment of strong confessional oppositions, he avoided -- this is something extraordinary -- the harshness and rhetoric of anger of the time in discussions among Christians, something rare as I said -- and he looked only to the presentation of the spiritual roots and to the revitalization of the faith in the Church.
His vast and penetrating knowledge of sacred Scripture and of the fathers of the Church served this cause: the same knowledge that supported his personal relationship with God and the austere spirituality that he derived from modern devotion and Rhenish mysticism.
Characteristic of St. Canisius' spirituality was a profound personal friendship with Jesus.
For example, on Sept. 4, 1549, he wrote in his diary, speaking with the Lord:

"In the end, as if you opened to me the heart of the Most Sacred Body, which it seemed to me I saw before me, you commanded me to drink from that source, inviting me, so to speak, to attain the waters of my salvation from your founts, O my Saviour."

And then he saw that the Saviour gave him a garment with three parts that were called peace, love and perseverance. And with this garment made up of peace, love and perseverance, Canisius carried out his work of renewal of Catholicism.
His friendship with Jesus -- which is the centre of his personality -- nourished by love of the Bible, by love of the Sacrament, by love of the Fathers, this friendship was clearly united to the awareness of being a continuer of the mission of the Apostles in the Church. And this reminds us that every genuine evangelizer is always a united instrument with Jesus and the Church and, because of this, fruitful.
St. Peter Canisius was formed in his friendship with Jesus in the spiritual environment of the Carthusian monastery of Cologne, in which he was in close contact with two Carthusian mystics: Johann Lansperger, latinised into Lanspergius, and Nicholas van Hesche, latinised into Eschius. Subsequently he deepened the experience of that friendship, familiaritas stupenda nimis, with the contemplation of the mysteries of Jesus' life, which form a large part of St. Ignatius' spiritual exercises. His intense devotion to the Lord's Heart, which culminated in consecration to the apostolic ministry in the Vatican Basilica, has its foundation here.
Rooted in the Christocentric spirituality of St. Peter Canisius is a profound conviction:

There is no soul solicitous of its own perfection that does not practice mental prayer every day, an ordinary means that permits the disciple of Jesus to live in intimacy with the divine Master.

Because of this, in the writings destined to the spiritual education of the people, our saint insists on the importance of the liturgy with his comments on the Gospels, on feasts, on the rite of the holy Mass and on the sacraments but, at the same time, he is careful to show to the faithful the need and the beauty of personal daily prayer, which should support and permeate participation in the public worship of the Church.
This is an exhortation and a method which preserves their value intact, especially after they were proposed again authoritatively by the Second Vatican Council in the Constitution "Sacrosanctum Concilium": Christian life does not grow if it is not nourished by participation in the liturgy, particularly in Sunday's holy Mass, and by personal daily prayer, by personal contact with God.
Amid the thousands of activities and the many distractions that surround us, it is necessary to find moments of recollection before the Lord every day to listen to him and to speak with him.
At the same time, the example that St. Peter Canisius has left us, not only in his works, but above all with his life is always timely and of permanent value.
He teaches clearly that the apostolic ministry is effective and produces fruits of salvation in hearts only if the preacher is a personal witness of Jesus and is able to be an instrument at his disposal, united closely to him by faith in his Gospel and in his Church, by a morally coherent life and incessant prayer as love.
And this is true for every Christian who wishes to live his adherence to Christ with commitment and fidelity. "