The Master of Liesborn
Saint Scholastica
From Saints John the Evangelist, Scholastica and Benedict
Part of The Liesborn Altarpiece
1470 - 1480
Oil on wood
The National Gallery, London
Saint Scholastica is depicted as an abbess. The crook of her crozier is ornamented with the Sacrifice of Isaac, a common parallel to the Crucifixion.

Lorenzo Monaco (active 1399; died 1423 or 1424)
St Benedict and St Scolastica (detail) from Incidents in the Life of Saint Benedict
Being A Panel in the San Benedetto Altarpiece
1407 - 09
Oil and mixed media on board
The National Gallery, London
Saint Benedict visits his sister, Saint Scholastica. She prays he will remain all night and a rainstorm begins and so he cannot depart. 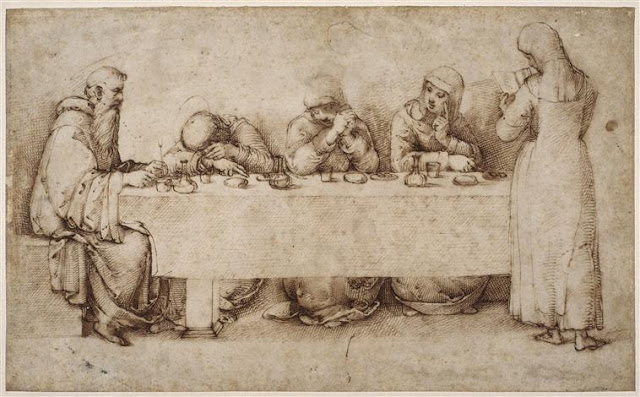 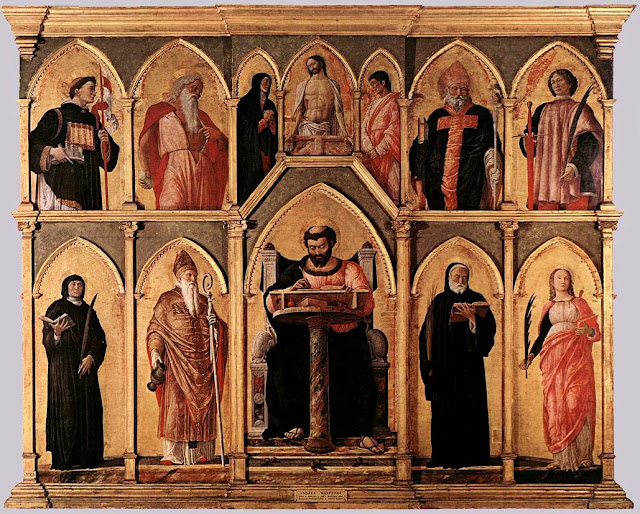 "His sister Scholastica, who was consecrated to God from her very childhood, used to come once a year to see him; unto whom the man of God was wont to go to a house not far from the gate, within the possession of the Monastery. Thither she came one day according to her custom, and her venerable brother likewise with his disciples: where, after they had spent the whole day in the praise of God and pious discourses, the night drawing on, they took their refection together. As they were yet sitting at table, and protracting the time with holy conference, the religious woman, his sister, entreated him saying: “I beseech you, leave me not this night, that we may talk until morning of the joys of the heavenly life.” To whom he answered: “What is this you say, sister? By no means can I stay out of my Monastery.” At this time the sky was serene, and not a cloud was to be seen in the air.
The holy woman, therefore, hearing her brother’s refusal, clasped her hands together upon the table, and bowing her head upon them she prayed to Almighty God. As she raised up her head from the table, there began such vehement lightning and thunder, with such abundance of rain, that neither venerable Benedict nor his Brethren were able to put foot out of doors. For the holy woman when she leaned her head upon her hands, poured forth a flood of tears upon the table by which she changed the fair weather into foul and rainy. For, immediately after her prayers, followed the inundation, and the two did so concur that, as she lifted up her head, the crack of thunder was heard, so that in one and the same instant she lifted up her head and brought down the rain.
Then the man of God perceiving that, by reason of thunder and lightening with continual showers of rain, he could not possibly return to his monastery, was sad and began to complain, saying: “God Almighty forgive you, sister, what is this you have done?” To whom she made answer: “I prayed you to stay and you would not hear me; I prayed to Almighty God and He heard me! Now, therefore, if you can, go forth to the Monastery and leave me.” But he not able to go forth, was forced to stay against his will.
Thus it fell out that they spent the night in watching, and received full content in spiritual discourse of heavenly matters. By this it appears, as I said before, that he desired something which he could not obtain; for if we consider the mind of the venerable man, he would, without doubt, have had the fair weather to continue in which he set out. But, contrary to what he willed, he found a miracle worked by the courage of a woman in the strength of Almighty God. And no wonder if at that time a woman were more powerful than he, considering she had long desired to see her brother. For according to the saying of St. John: “God is charity,” and with good reason she was more powerful who loved more.
The next day, the venerable woman returned to her Cloister and the man of God to his Monastery. When, behold, three days after, while standing in his cell, he saw the soul of his sister depart out of her body, and, in the form of a dove, ascend and enter into the celestial mansions. Who rejoicing much to see her great glory, gave thanks to God Almighty in hymns and praises, and announced her death to the Brethren. Whom he forthwith sent to bring her body to the Monastery, and caused it to be buried in the same tomb that he had prepared for himself.
By means of which it fell out, that as their minds were always one in God, so also their bodies were not separated in their burial."

One does wonder if there had not been a Scholastica, would there have been a Saint Benedict ?
Posted by Unknown at 4:46 pm