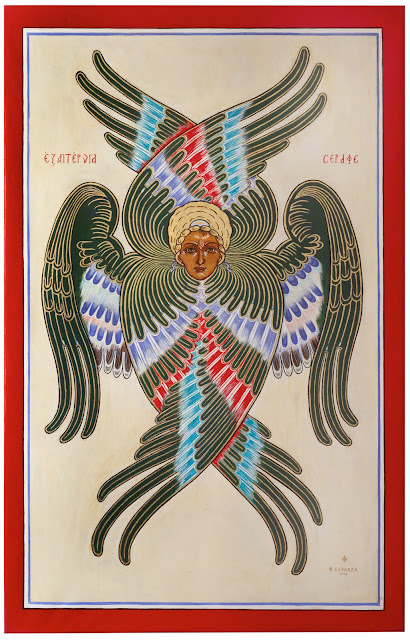 Guillermo Esparza
The Green Seraph
Oil and Gold in linen

"2. Since, then, following the example of the most blessed father Francis, I breathlessly sought this peace, I, a sinner, who have succeeded to the place of that most blessed father after his death, the seventh Minister General of the brothers, though in all ways unworthy--it happened that by the divine will in the thirty-third year after the death of that blessed man I ascended to Mount Alverna as to a quiet place, with the desire of seeking spiritual peace; and staying there, while I meditated on the ascent of the mind to God, amongst other things there occurred that miracle which happened in the same place to the blessed Francis himself, the vision namely of the winged Seraph in the likeness of the Crucified. While looking upon this vision, I immediately saw that it signified the suspension of our father himself in contemplation and the way by which he came to it.
3. For by those six wings are rightly to be understood the six stages of illumination by which the soul, as if by steps or progressive movements, was disposed to pass into peace by ecstatic elevations of Christian wisdom. The way, however, is only through the most burning love of the Crucified, Who so transformed Paul, "caught up into the third heaven" [II Cor., 12, 2], into Christ, that he said, "With Christ I am nailed to the cross, yet I live, now not I, but Christ liveth in me" [Gal., 2, 19]; who therefore so absorbed the mind of Francis that his soul w as manifest in his flesh and he bore the most holy stigmata of the Passion in his body for two years before his death.
Therefore the symbol of the six-winged Seraph signifies the six stages of illumination, which begin with God's creatures and lead up to God, to Whom no one can enter properly save through the Crucified. For he who does not enter by the door but otherwise, he is a thief and a robber [John, 10, 1]. But if anyone does enter by this door, he shall go in and go out and shall find pastures [John, 9]. Because of this John says in his Apocalypse [22, 14], "Blessed are they that wash their robes in the blood of the Lamb, that they may have a right to the Tree of Life and may enter in by the gates into the City"; as if he were to say that one cannot enter into the heavenly Jerusalem through contemplation unless one enter through the blood of the Lamb as through a gate. For one is not disposed to contemplation which leads to mental elevation unless one be with Daniel a man of desires [Dan., 9, 23].
But desires are kindled in us in two ways: by the cry of prayer, which makes one groan with the murmuring of one's heart, and by a flash of apprehension by which the mind turns most directly and intensely to the rays of light [Ps., 37, 9].
4. Therefore to the cry of prayer through Christ crucified, by Whose blood we are purged of the filth of vice, do I first invite the reader, lest perchance he should believe that it suffices to read without unction, speculate without devotion, investigate without wonder, examine without exultation, work without piety, know without love, understand without humility, be zealous without divine grace, see without wisdom divinely inspired.
Therefore to those predisposed by divine grace, to the humble and the pious, to those filled with compunction and devotion, anointed with the oil of gladness [Ps., 44, 8], to the lovers of divine wisdom, inflamed with desire for it, to those wishing to give themselves over to praising God, to wondering over Him and to delighting in Him, do I propose the following reflections, hinting that little or nothing is the outer mirror unless the mirror of the mind be clear and polished.
Bestir yourself then, O man of God, you who previously resisted the pricks of conscience, before you raise your eyes to the rays of wisdom shining in that mirror, lest by chance you fall into the lower pit of shadows from the contemplation of those rays.
5. I have decided to divide my treatise into seven chapters, heading them with titles so that their contents may be the more easily understood. I ask therefore that one think rather of the intention of the writer than of his work, of the sense of the words rather than the rude speech, of truth rather than beauty, of the exercise of the affections rather than the erudition of the intellect. That such may come about, the progress of these thoughts must not be perused lightly, but should be meditated upon in greatest deliberation."
(The Prologue to St Bonaventure`s "Itinerarium Mentis ad Deum" ("The Mind`s Road to God") translated by George Boas ( July 1953)
Link) 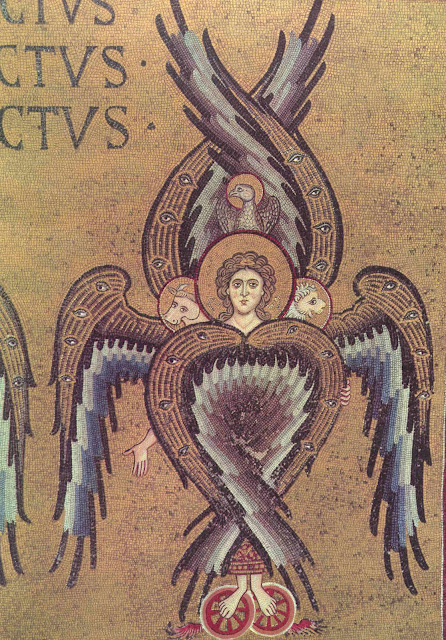 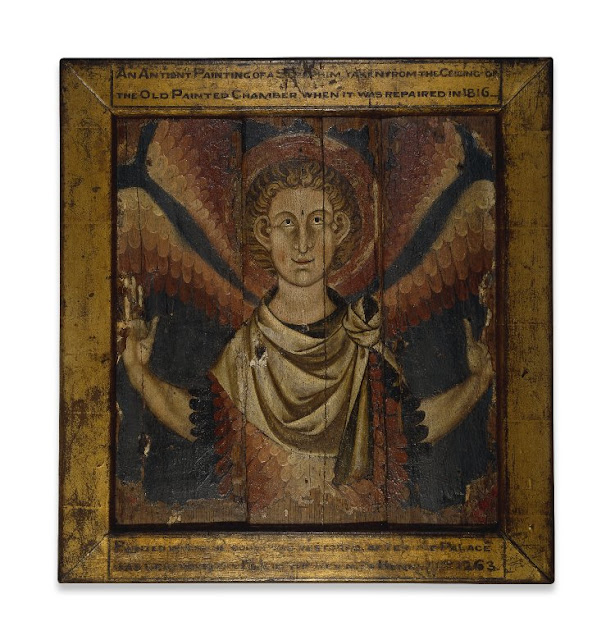 A six-winged, nimbed seraph
Taken from the ceiling of the painted chamber, Palace of Westminster, during repairs in 1816.
Painted when the room was restored after the Palace was destroyed by fire in the Reign on Henry IIIrd 1263
Painted panel; oil and gesso on oak
454 millimetres (inc.frame) x Width: 426 millimetres x Thickness: 21 millimetres (panel)
The British Museum, London

"In 1259 Bonaventure went up to Mount La Verna, as a pilgrim in search for inner peace. There he had the mystical experience of the speculation of a poor man in the desert.
On La Verna Bonaventure found the secret of the peace of the seventh day in the unitive experience of Saint Francis who met on that spot the Crucified Seraph and whose flesh was stamped with the holy stigmata.
The Itinerarium is certainly a work of great philosophical speculation, but at the same time Bonaventure is conscious that he had to face a mystery which one cannot penetrate except with the power of the sapientia crucis of Francis. The key for reading and interpreting the Itinerarium consists in this humble stooping towards the true wisdom which comes from the speculatio of Christ Crucified.
That is why Bonaventure admonishes us:
"First, therefore, I invite the reader to the groans of prayer through Christ crucified, through whose blood we are cleansed from the filth of vice so that he not believe that reading is sufficient without unction, speculation without devotion, investigation without wonder, observation without joy, work without piety, knowledge without love, understanding without humility, endeavor without grace, reflection as a mirror (speculatio) without divinely inspired wisdom."
The Itinerarium, which is the journey of the soul into God through six grades of spiritual ascent towards the seventh stage of mystical union, is built upon a seven-fold structure which is common in Bonaventure and in medieval theology, and which has as its centre the mystery of the cross revealed in the stigmatized body of Saint Francis.
On La Verna Bonaventure understood the dynamism of this experience of mystical union:
"This was shown also to blessed Francis, when in ecstatic contemplation on the height of the mountain where I thought out these things I have written there appeared to him a six-winged Seraph fastened to a cross."
Bonaventure tries to explain the mystical union of Francis with the Crucified through the category of a paschal experience. The point of arrival of the long journey of the soul in search for God is found in this transforming experience of Francis, which Bonaventure himself experienced and proposes to his readers:
"Whoever turns his face fully to the Mercy Seat and with faith, hope and love, devotion, admiration, exultation, appreciation, praise and joy beholds him hanging upon the cross, such a one makes the Pasch, that is, the passover, with Christ.
By the staff of the cross he passes over the Red Sea, going from Egypt into the desert, where he will taste the hidden manna; and with Christ he rests in the tomb, as if dead to the outer world, but experiencing, as far as is possible in this wayfarer`s state, what is said on the cross to the thief who adhered to Christ: `Today you shall be with me in paradise.`"
The icon of Francis as the exemplification of Christ Crucified, is represented by Bonaventure as the fruit of a long experience of prayer and interior searching. In front of this icon one has to stop and contemplate.
The Seraphic Doctor tries to explain how this contemplation comes about. He says that it is a question of the apex affectus (height of affection) which goes way beyond any operation of a rational kind, it is a docta ignorantia which hides the mysteries of theology in the most luminous darkness of a silence full of wisdom.
Bonaventure makes use of mystical terms present in the treatise De mystica theologia by Dionysius the Areopagite. In this way he arrives at the centre of the value of philosophical speculation which stops in front of the coincidence of opposites of the mystery of the cross, which is both darkness and light at the same time.
If the Itinerarium departs from the speculation of a poor man in the desert, who could well be an indication of Saint Francis himself, one could say that it concludes with the representation of this poor man as an icon of Christ, who is poor and naked upon the cross, of that Christ who is "the origin of all wisdom."
(Noel Muscat OFM Francis of Assisi and Bonaventre`s Theology of the Cross;
Link pdf file) 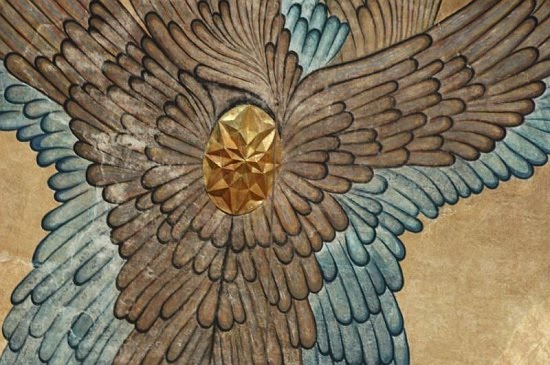