The Archbishop of Westminster comments on the child abuse scandals 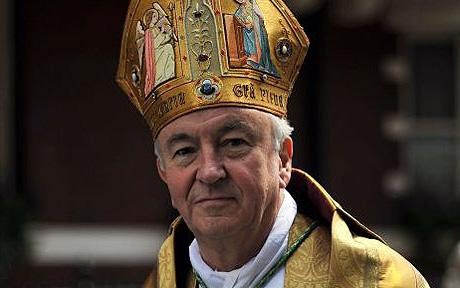 In today`s Times under the banner The Church is not trying to cover anything up , the Archbishop of Westminster puts up a valiant defence in regard to the recent child abuse scandals.
The Archbishop in particular strenuously defends the Pope against the recent unjustified attacks made against the Pope personally.

"The child abuse committed within the Roman Catholic Church and its concealment is deeply shocking and totally unacceptable. I am ashamed of what happened, and understand the outrage and anger it has provoked.
That shame and anger centres on the damage done to every single abused child. Abuse damages, often irrevocably, a child’s ability to trust another, to fashion stable relationships, to sustain self-esteem. When it is inflicted within a religious context, it damages that child’s relationship to God. Today, not for the first time, I express my unreserved shame and sorrow for what has happened to many in the Church.
My shame is compounded, as is the anger of many, at the mistaken judgments made within the Church: that reassurance from a suspect could be believed; that credible allegations were deemed to be “unbelievable”; that the reputation of the Church mattered more than safeguarding children. These wrong reactions arise whenever and wherever allegations of abuse are made, whether within a family or a Church. We have to insist that the safety of the child comes first because the child is powerless.
Serious mistakes have been made within the Catholic Church. There is some misunderstanding about the Church, too. Within the Church there is a legal structure, its canon law. It is the duty of each diocesan bishop to administer that law. Certain serious offences against that law have to be referred to the Holy See to ensure proper justice. Some of these offences are not criminal in public law (such as profanation of the sacraments), others (such as offences against children) are. The role of the Holy See is to offer guidance to ensure that proper procedures are followed, including the confidentially needed to protect the good name of witnesses, victims and the accused until the trial is completed. It is no different from any other responsible legal procedure.
This “secrecy” is nothing to do with the confidentiality, or “seal” of the confessional, which is protected for reasons of the rights of conscience.
The relationship between the administration of church law and the criminal law in any particular state is a point of real difficulty and misunderstanding. Nothing in the requirement of canon law prohibits or impedes the reporting of criminal offences to the police. Since 2001 the Holy See, working through the Congregation for the Doctrine of Faith, has encouraged that course of action on dioceses who have received evidence about child abuse and which the diocesan authorities are responsible for pursuing. The canonical procedure is best put on hold until the criminal investigation is complete, whatever its outcome. This is what is needed. That it has not happened consistently is deeply regrettable.
In England and Wales, since 2001, the agreed policy followed by the bishops has been to report all allegations of child abuse, no matter from how far in the past, to the police or social services. By doing so and by having clear safeguarding procedures in place in every parish as well as independent supervision at diocesan and national level, we have built good relationships with those authorities in these matters, including, in some areas, co-operation in the supervision of offenders in the community.
What of the role of Pope Benedict? When he was in charge of the Congregation for the Doctrine of the Faith he led important changes made in church law: the inclusion in canon law of internet offences against children, the extension of child abuse offences to include the sexual abuse of all under 18, the case by case waiving of the statue of limitation and the establishment of a fast-track dismissal from the clerical state for offenders. He is not an idle observer. His actions speak as well as his words.
Every year since 2002 the Catholic Church in England and Wales has made public the exact number of allegations made within the Church, the number reported to the police, the action taken and the outcome. As far as I know, no other organisation in this country does this. It is not a cover-up; it is clear and total disclosure. The purpose of doing so is not to defend the Church. It is to make plain that in the Catholic Church in England and Wales there is no hiding place for those who seek to harm children. On this we are determined.
One more fact. In the past 40 years, less than half of 1 per cent of Catholic priests in England and Wales (0.4 per cent) have faced allegations of child abuse. Fewer have been found guilty. Do not misunderstand me. One is too many. One broken child is a tragedy and a disgrace. One case alone is enough to justify anger and outrage. The work of safeguarding, within any organisation and within our society as a whole, is demanding but absolutely necessary. The Catholic Church here is committed to safeguarding children and all vulnerable people."