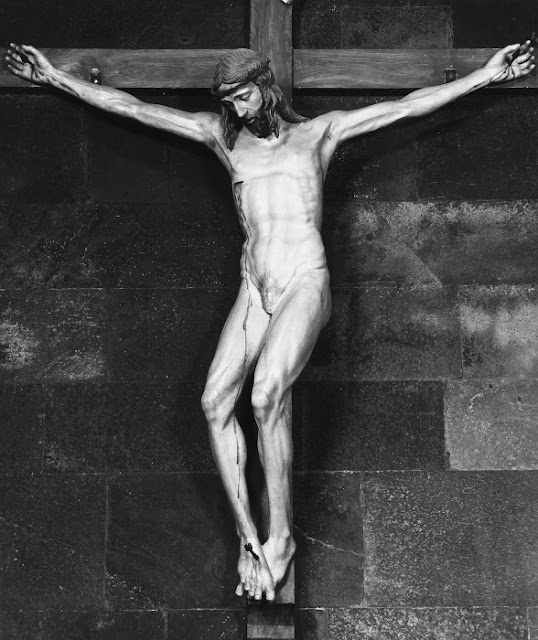 Joseph Haydn's 'Seven Last Words from the Cross' - Introduction: Maestoso ed Adagio - as performed by the Navarra Quartet.This performance was a part of the 2009 City of London Festival and took place in the Church of St. Stephen, Walbrook, on the 26th of June 2009.The Navarra Quartet consist of: Xander van Vliet (Violin), Marije Ploemacher (Violin), Simone van der Giessen (Viola), Nathaniel Boyd (Cello).
The Seven Last Words of Christ was composed by Joseph Haydn, featuring seven meditations on the last words of Jesus Christ. It was commissioned in 1787 for the Good Friday service at the Grotto Santa Cueva near Cádiz in southern Spain.
Haydn wrote the following about the work:

"Some fifteen years ago I was requested by a canon of Cádiz to compose instrumental music on the seven last words of Our Saviour on the Cross.
It was customary at the Cathedral of Cádiz to produce an oratorio every year during Lent, the effect of the performance being not a little enhanced by the following circumstances.
The walls, windows, and pillars of the church were hung with black cloth, and only one large lamp hanging from the center of the roof broke the solemn darkness.
At midday, the doors were closed and the ceremony began. After a short service the bishop ascended the pulpit, pronounced the first of the seven words (or sentences) and delivered a discourse thereon. This ended, he left the pulpit and fell to his knees before the altar. The interval was filled by music.
The bishop then in like manner pronounced the second word, then the third, and so on, the orchestra following on the conclusion of each discourse.
My composition was subject to these conditions, and it was no easy task to compose seven adagios lasting ten minutes each, and to succeed one another without fatiguing the listeners; indeed, I found it quite impossible to confine myself to the appointed limits"

"The last seven words of our Redeemer on the Cross is truly one of the most sublime examples in the field of music of how it is possible to unite art and faith.
The musician's composition is wholly inspired and almost "directed" by the Gospel texts that culminate in the words Jesus uttered before drawing his last breath.
However, in addition to being bound by the text, the composer was also bound by the precise conditions imposed by those who commissioned the work, dictated by the particular type of celebration in which the music was to be performed.
And it was precisely on the basis of these very strict obligations that he could manifest the full excellence of his creative genius. Having to conceive of seven dramatic and meditative sonatas, Haydn focused on their intensity, as he himself said in a letter of the time:
"Every sonata, or every text, is expressed by means of instrumental music alone so that it will necessarily inspire the most profound impression in the listener's soul, even in someone who is least attentive" (Letter to W. Forster, 8 April 1787).
In this there is something similar to the work of the sculptor who must constantly be able to master the material with which he is working—let us think of the marble of Michelangelo's "Pieta"—and yet succeed in making this matter eloquent, in eliciting from it a unique and unrepeatable synthesis of thought and emotion, an absolutely original artistic expression but which, at the same time, is totally at the service of that precise content of faith as if it were dominated by the event it is portraying—in our case the seven words and their context.
Here is concealed a universal law of artistic expression: the ability to communicate beauty, which is also goodness and truth, by a tangible means a painting, a piece of music, a sculpture, a written text, a dance, etc.
Indeed, it is the same law that God followed to communicate himself and his love to us: he became incarnate in our human flesh and realized the greatest masterpiece of all Creation: "the one mediator between God and men, the man Christ Jesus", as St Paul wrote (1 Tim 2:5).
The "harder" the material, the more demanding are the bonds of expression and the more visibly the artist's genius stands out.
Thus on the "hard" Cross, God spoke in Christ the most beautiful, the truest Word of love, which is Jesus in his full and definitive gift of himself. He is God's last word, not in a chronological but in a qualitative sense.
He is the universal, absolute Word, but it was spoken through that real man, in that time and in that place, in that "hour", John's Gospel says.
This binding of oneself to history, to the flesh, is a sign par excellence of faithfulness, of a love so free that it does not fear to be bound for ever, to express the infinite in the finite, the whole in the fragment.
This law, which is the law of love, is also the law of art in its highest expressions.
Dear friends, perhaps I have carried on this reflection a bit too long, but the blame or perhaps the merit belongs to Franz Joseph Haydn.
Let us thank the Lord for these great artistic geniuses who felt able to illustrate his Word Jesus Christ and his words the Sacred Scriptures. I renew my thanks to all who conceived of and prepared this tribute: may the Lord lavishly reward each one. "