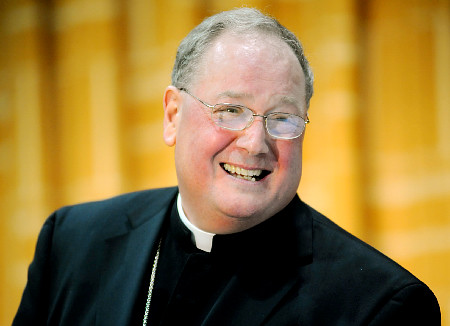 After the Palm Sunday Mass, Archbishop Dolan of New York launched into a one hour speech defending the Pope against the recent accusations of personal involvement in covering up recent sex abuse cases.
The reaction of the congregation was favourable and he was given a twenty second standing ovation.
It was a passionate and reasoned speech. One hopes that more will come to the defence of the Pope.
See the Associated Press Account of the speech:

"NEW YORK — Archbishop Timothy Dolan was greeted with applause after finishing Palm Sunday Mass by defending Pope Benedict XVI against suggestions he aided cover-ups of reports of child abuse.
The standing-room-only crowd at St. Patrick's Cathedral applauded for 20 seconds after Dolan read a statement calling the pope the "leader in purification, reform and renewal that the church so very much needs."
Still, Dolan said reports of abuse of minors by some priests in Ireland and Germany and the retelling of the abuse of children by a priest in Wisconsin had "knocked us to our knees once again" and intensified the somberness of Holy Week, the most sacred time on the Christian calendar.
He urged the Manhattan congregation to pray for the Pope, saying he was suffering some of the same unjust accusations once faced by Jesus.
"Anytime this horror, this vicious sin, this nauseating crime is reported, as it needs to be, victims and their families are wounded again, the vast majority of faithful priests bow their heads in shame anew and sincere Catholics like you experience another dose of shock, sorrow and even anger," Dolan said.
He added: "What deepens the sadness now is the unrelenting insinuations against the Holy Father himself, as certain sources seem almost frenzied to implicate the man." ...
Dolan in his homily also didn't mention the scandal, but a church spokesman alerted reporters in the crowd that he would make a statement at the end of the Mass, which lasted more than an hour.
Dolan credited the Pope for making possible the progress the Catholic Church has made in the United States against "this sickening sin and crime," saying changes "could never have happened without the insistence and support of the very man now being daily crowned with thorns by groundless innuendo."
He asked whether the church and the Pope "need intense scrutiny and just criticism for tragic horrors long past?"
"Yes! Yes!" he said, answering his question. "He himself has asked for it, encouraging complete honesty, at the same time eloquently expressing contrition and urging a thorough cleansing.
"All we ask is that it be fair and that the Catholic Church not be singled out for a horror that has cursed every culture, religion, organization, institution, school, agency and family in the world," he said.
Palm Sunday, the Sunday before Easter, marks Jesus' entry into Jerusalem and the laying of palm fronds before him. Outside the cathedral Sunday, worshippers emerging from the service with palm fronds were largely supportive of Dolan's remarks.
"I thought it was very well put," said Inga Yungwirth, of Hagerstown, Md. "It doesn't shake my faith."
Earlier, several protesters had gathered outside the Gothic-style cathedral, which sits on Fifth Avenue opposite Rockefeller Center.
"Honk if Pope should resign," said one sign, which attracted only an occasional toot from drivers."