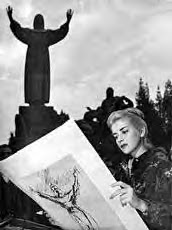 In 1960, while working in Rome on the movie "Francis of Assisi," actress Dolores Hart

In Catholic Online there is a transcript of an interview with Mother Dolores Hart, the prioress of the Abbey of Regina Laudis, Bethlehem, Connecticut.

In the interview, Mother Dolores discusses the history of the monastery, her own personal journey from Hollywood film star to Benedictine nun, and the personality of the abbey's founder, Mother Benedict Duss who founded the Benedictine monastery 60 years ago, after the Second World War. She died in 2005.

Hal Wallis signed MotherDolores to a seven-year contract when she was only 17. In those seven years to follow, she was the leading lady for Elvis Presley, Montgomery Clift and Stephen Boyd, and she says that she learned her trade from Karl Malden, Anthony Quinn and Cyril Richard.

"Q: Many convents, during the turbulent time after the Second Vatican Council, were forced to close for one reason or another. What do you think kept Regina Laudis not only stable, but flourishing during that time?

Mother Dolores: Regina Laudis suffered its own turmoil during those years. What kept Mother Benedict going was her adherence to Benedictine tradition in work and prayer and a dedicated program of renewal, engaged in by the whole community.

For Mother Benedict this did not mean throwing everything out, but taking on perennial values with a new dedication."

Regina Laudis is a monastery of contemplative Benedictine women living in union with the Roman Catholic Church and following the Rule of St. Benedict according to the Primitive Observance.

The Abbey of Regina Laudis

Mother Delores Hart
From the Glitter of Hollywood to the Quiet of a Convent
Posted by Unknown at 8:59 pm