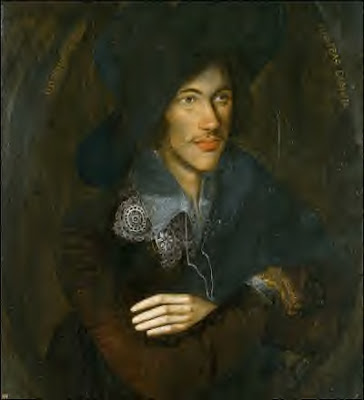 This portrait shows Donne as a young man dressed in a black floppy hat and open collar, playing the role of a melancholic lover. The poet is shown emerging from the shadows and an original Latin inscription translates as 'O Lady Lighten our darkness.' It seems the picture was probably painted for a lover or conceived of as part of a campaign to conquer a reluctant heart. For Donne, the mid 1590s was a period of intense creativity when he wrote many of his most celebrated love poems.

Expensive lace collars are left open and untied at the neck, perhaps in a pun on the author's name (that is, 'unDonne') and as an affectation of the fashionable literary disposition of melancholy.Donne was closely involved in commissioning the composition and it has been argued that the painting 'is as much a product of Donne's creative imagination as the Satires and the early Elegies`.
Posted by Unknown at 6:14 pm