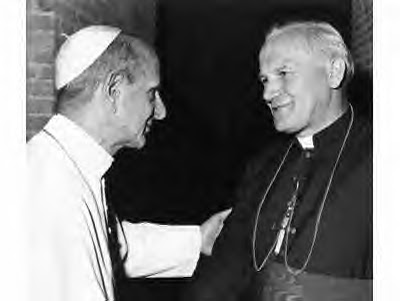 The 110th anniversary of the birth of Pope Paul VI occurred on 26th September.

It is perhaps fashionable in some circles to denigrate Paul VI.

However the event prompted a speech by Pope Benedict XVI. He said that Pope Paul VI was prophetic because he showed the inherent contradiction in "progress" that lacks ethical and spiritual foundations.

He spoke of the "spirit of evangelical wisdom" with which Paul VI guided the Church during and after the Second Vatican Council.

The Pope continued: "With prophetic intuition, he understood the hopes and fears of the men and women of that time, seeking to highlight the positive aspects and illuminate them with the light of truth and of the love of Christ.

"The love he fostered for humanity with its achievements, the marvelous discoveries, the advantages and rewards of technology and science, did not stop him from bringing to light the contradictions, errors and risks of scientific and technological progress detached from a strong reference to ethical and spiritual values."

The Holy Father described his predecessor as "prudent and courageous in guiding the Church with realism and evangelical optimism, fueled by indomitable faith."

He said that Paul VI "hoped for the coming of the 'civilization of love,' convinced that evangelical charity constitutes the indispensable element for building an authentic universal brotherhood."
Posted by Unknown at 6:45 pm