A Feast of Angels 1 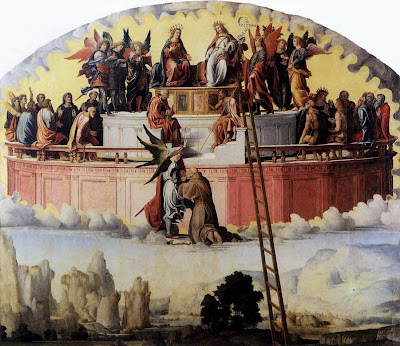 The painting was originally placed on the high altar of the monastery of Montorio Romano, a church dedicated to St Michael the Archangel in an area of the Sabine hills. This mountainous zone is actually depicted in the landscape in the background of the painting.

The scene shows the vision of the Blessed Amedeo Menez de Sylva, a Franciscan monk of Spanish origin who was the founder of the Amadeite branch of the order. Though suppressed in 1598, the Amadeites were active in Lombardy and Lazio between the end of the fifteenth and first part of the sixteenth centuries.

The narrative of Amedeo's vision is derived from the Apocalypsis Nova, a report that he wrote about his ecstatic trances and his dialogues with the Archangel Gabriel. The painting shows his vision of a celestial court positioned on a disk that hovers in the air and takes the form of Bramantesque architecture.

The commission of the painting is connected to a miracle that led to the construction of Santa Maria delle Grazie: Giustiniana Orsini had given money for the building of the convent in thanks for the intervention of the Blessed Amedeo in the miraculous healing of her son.
Posted by Unknown at 7:07 pm