The Ecstasy of St Gregory the Great 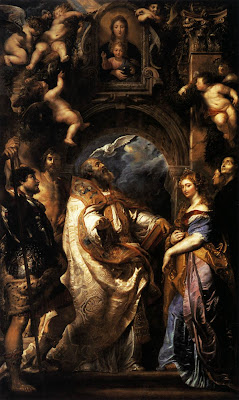 The Ecstasy of St Gregory the Great was commissioned for the high-altar painting of the Oratorians' main church, Santa Maria Vallicella in Rome.

It is a manifest expression of Counter-Reformation triumphalism.

Rubens considered this commission as the confirmation of his reputation as a painter in Rome. Yet the picture was not hung in the place for which it was intended, because it reflected the light entering the church too strongly. For this reason the canvas was replaced by a new version on slate.

This was quite different from the first painting; its composition was divided over three separate panels. This work, still in its original place in Santa Maria Vallicella, was ready in autumn 1608.

Immediately afterwards Rubens returned to Antwerp. He took the rejected canvas with him and placed it above the tomb of his mother, Maria Pijpelinckx, who had died while he was on his way home.
Posted by Unknown at 9:36 pm