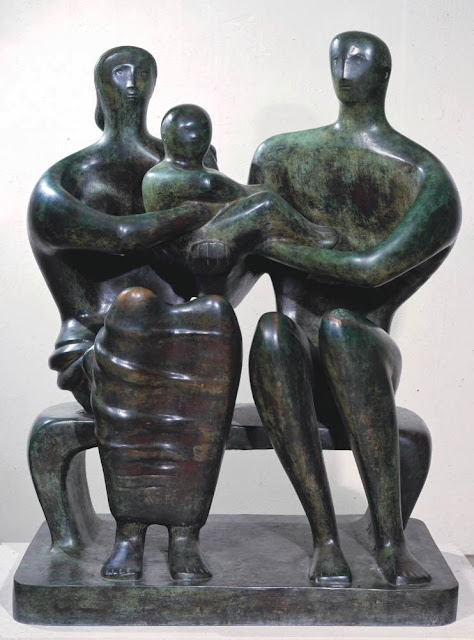 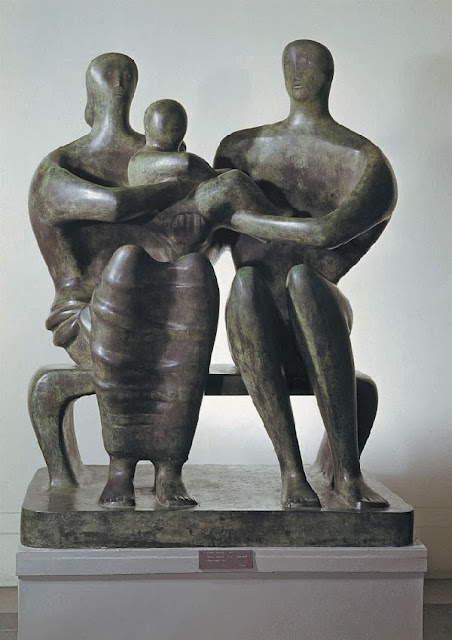 
The XXI plenary assembly of the Pontifical Council for the Family is in Rome and the family will be the topic of the next Extraordinary Synod of Bishops.

The narrative attached to the image on the Vatican website is as follows:

"A man and a woman are sitting next to each other on a bench. Their arms entwine to hold their little child together, a living tie between them, a permanent bond. Their raised knees and hollow busts form a kind of hospitable nest: the family is the sanctuary of life. The two monumental figures, with their majestically erect bust and very broad shoulders, do not have an individual character but are essential, universal and archetypical.

The distended forms appear to be shaped by an intense internal energy, as if the inexhaustible fruitfulness of nature was concentrated in them. They lean forward and, at the same time, toward each another. The almost frontal position accentuates their solemnity and sacred quality.

The conjugal bond and the new life that germinates points to the primary source of love and life: God himself. "

Originally in the 1940s, Moore was commissioned to make a sculpture for  Impington Village College in Cambridgeshire.

It was a progressive school for its time

Impington was designed by Walter Gropius, founder of The Bauhaus School of Architecture, and his partner Maxwell Fry. It is the only example of Gropius’s work in Britain and the building is now Grade I listed building.

However the work was not accepted for the school

Instead the work was accepted for another school: Barclay Secondary School in Stevenage

Four sculptures were produced: one for the school where it has pride of place in the entrance; another for the Tate; and two others are in the USA

Of the work, the school writes:

"This work is symbolic of our Barclay community, a school where families are welcomed and values of care, courtesy and confidence are embedded, where relationships, trust and mutual respect shape our daily life."

Moore regretted that the setting of the cast at Stevenage in a limited space in front of a curved baffle-wall, restricted  the view of the back of the work, which was designed in accordance with his insistence on the fully three-dimensional quality of sculpture. The Tate Gallery's cast is now exhibited in the large Sculpture Hall which allows for a full view of the sculpture

Family Group 1949 is an idealised vision of the nuclear family. Mother and father sit upright, their arms curving round to support the child between them. Their knees lean towards one another and they gaze calmly, but slightly impassively towards the spectator

It is a reassuring image of stability and security.

This theme was also used for another of Moore`s sculptures:  the life-size ‘Family Group’ in Hadene stone at Harlow New Town, 1954–5. 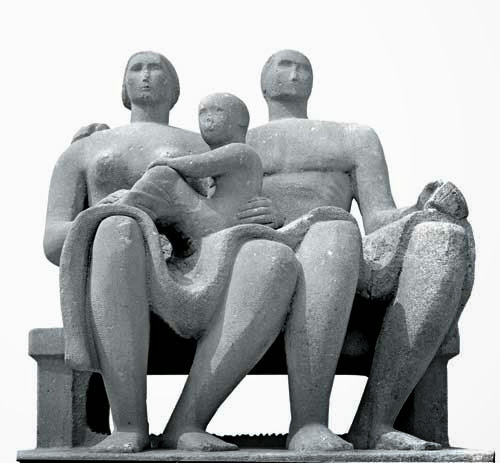 
Originally, it was sited in a landscape setting but was later moved to Civic Square and later inside  the extended and revamped Town Hall

According to Richard Cork in E. Rosenberg and Richard Cork, Architects’ Choice: Art and Architecture in Great Britain Since 1945, (Thames and Hudson, London, 1992), p. 52:

"The most lauded marriage between art and a new town occurred at Harlow, which grew rapidly from a small, scattered rural population to a thriving centre for over 70,000 people. It eventually acquired a sculpture collection larger than any other British town of similar size…"

Moore chose to depict a family group, which seemed particularly appropriate at the time as Harlow had a large population of young families. It was called "Pram Town". Its birthrate was three times the national average.

The Times described the unveiling:

" . . within an hour of its unveiling, the Family had already entered into the life of Harlow. Small boys were getting up on the pedestal, clambering over the woman and taking occupation of the empty place in the man's lap. At one moment, indeed, the family of three had expanded to one of seven." 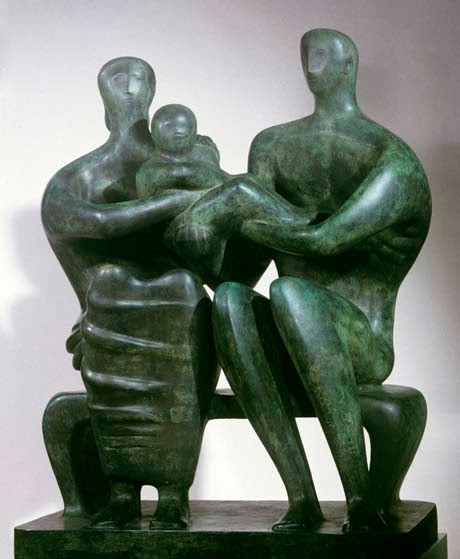 The commentary from the V and A exhibition is more in touch with Moore`s work than the blurb from the Vatican website. Here is what the V and A said:

World War Two tore British families and the economy apart and was followed by a period of austerity.

The War created expectations for a more equal society.

The foundation of the Welfare State sought to overcome the 'Giant Evils' of 'Want, Disease, Ignorance, Squalor and Idleness'. It also aimed to ensure that people received adequate income, health, education, housing and employment.

Gradually, the economy, health and education improved. By the 1950s unemployment was low.

However, increased wealth and social mobility were offset by social inequality. For many families, poverty and poor housing continued through this period. ...

The family, once the cornerstone of society, came under threat. Other changes included the emergence of the teenager, increasing numbers of working mothers, the rapid growth of cities and the ‘freedoms’ of the 1960s. "

Moore returned to the themes of The Family and Mother and Child through his long distinguished career. His views altered and developed