The Anniversary of the Coronation 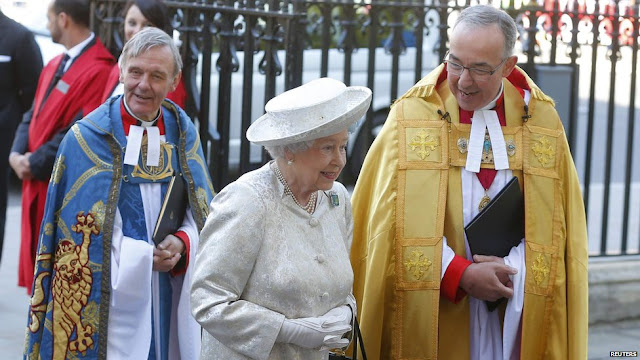 The Queen entered the service alongside the dean of the abbey, Dr John Hall, and followed by the Reverend Dr Robert Reiss, Canon of Westminster 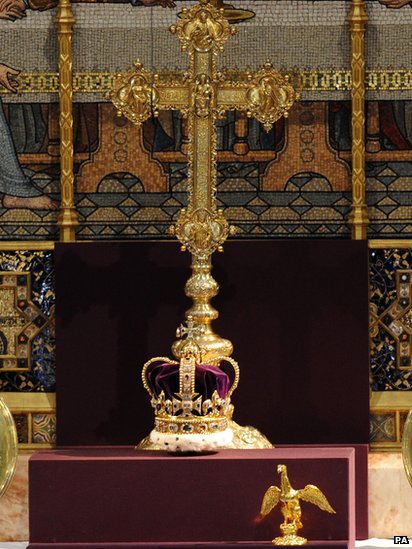 The solid gold St Edward's Crown, used at the Coronation in 1953 and kept in the Tower of London, was displayed on the High Altar to mark the occasion

The Coronation of The Queen took place  on 2 June 1953

Today`s ceremony reflected the five key elements of the ceremony of the Coronation of a Monarch:

The Coronation ceremony takes place within a religious ceremony: the Anglican rite of the Holy Eucharist

Sixty years ago, the ceremony was a strictly Anglican affair. In today`s ceremony, there were representatives of all Christian denominations as well as of the Islamic and Jewish faiths as well as Buddhists and others

The principal theme of today`s service was not a celebration of power but service and humility.

'And whosoever will be chief among you, let him be your servant' (Matthew 20:27)

Today`s service has a wider application

In his speech to Superiors General in April 2013, Pope Francis linked the exercise of authority with service. In this case ecclesiastical authority. He quoted the same passage from St Matthew`s Gospel as the Archbishop did. He said:

"A second element I would like to underline in the exercise of authority is service: we must never forget that true power, at any level, is service, whose bright summit is upon the Cross.

Benedict XVI, with great wisdom, often reminded the Church that although man frequently equates authority with control, dominion, success, for God authority is always synonymous with service, humility, love; it means entering the logic of Jesus who kneels to wash the Apostles' feet (cf. Angelus, 29 January 2012), and says to his disciples:

Let us think of the damage done to the People of God by men and women of the Church who are careerists, climbers, who “use” the People, the Church, our brothers and sisters — those they should be serving — as a springboard for their own ends and personal ambitions. These people do the Church great harm.

May you always know how to exercise authority by accompanying, understanding, helping and loving; by embracing every man and every woman, especially people who feel alone, excluded, barren, on the existential margins of the human heart. Let us keep our gaze fixed on the Cross: there is found any authority in the Church, where the One who is the Lord becomes a servant to the point of the total gift of himself."