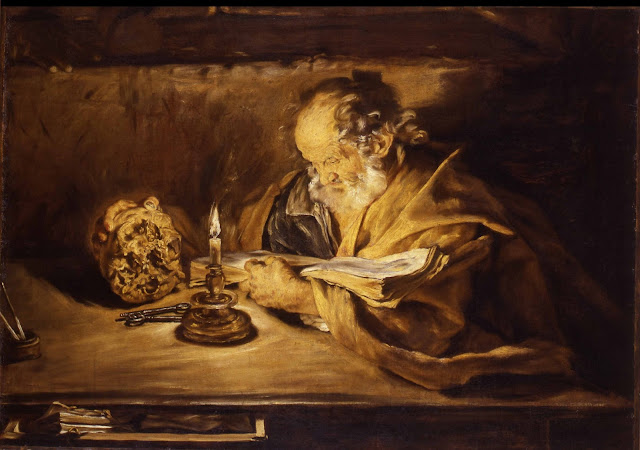 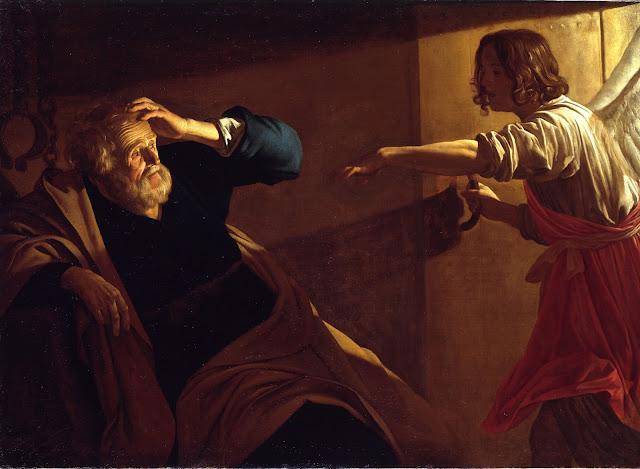 
Serodine was greatly influenced by Caravaggio’s work, especially his use of unidealised figures and strong light and shadow

He died young and only about fifteen paintings of his survive

Like Serodine, Gerard van Honthorst was strongly influenced by Caravaggio and of his closest Italian follower Bartolomeo Manfredi (1582-1622)

He was one of the Utrecht Caravaggisti

Because of his interest in candle-lit night scenes, he was known in Italy as Gherardo della Notte. His scenes of nocturnal revelry remained a favorite for discerning collectors

The work in Prato is a later version of the same theme explored by the artist in 1616 in his work which is now in the Staatliche Museen, Berlin

Acts 12 narrates the imprisonment of Peter by Herod in Jerusalem, and his subsequent escape through divine intervention

It was a time of popular persecution. James had been executed. Then they came for Peter. 16 soldiers took him away. He was expected to be killed after Passover in the same way that Christ had been killed.

No doubt Peter was very well aware of what was supposed to happen to him.

"1 About that time King Herod laid hands upon some members of the church to harm them.
2  He had James, the brother of John, killed by the sword,
3 and when he saw that this was pleasing to the Jews he proceeded to arrest Peter also. (It was [the] feast of Unleavened Bread.)
4 He had him taken into custody and put in prison under the guard of four squads of four soldiers each. He intended to bring him before the people after Passover.
5 Peter thus was being kept in prison, but prayer by the church was fervently being made to God on his behalf.
6 On the very night before Herod was to bring him to trial, Peter, secured by double chains, was sleeping between two soldiers, while outside the door guards kept watch on the prison.
7 Suddenly the angel of the Lord stood by him and a light shone in the cell. He tapped Peter on the side and awakened him, saying, “Get up quickly.” The chains fell from his wrists.
8 The angel said to him, “Put on your belt and your sandals.” He did so. Then he said to him, “Put on your cloak and follow me.”
9 So he followed him out, not realizing that what was happening through the angel was real; he thought he was seeing a vision.
10 They passed the first guard, then the second, and came to the iron gate leading out to the city, which opened for them by itself. They emerged and made their way down an alley, and suddenly the angel left him.
11 Then Peter recovered his senses and said, “Now I know for certain that [the] Lord sent his angel and rescued me from the hand of Herod and from all that the Jewish people had been expecting.”
12 When he realized this, he went to the house of Mary, the mother of John who is called Mark, where there were many people gathered in prayer.
13 When he knocked on the gateway door, a maid named Rhoda came to answer it.
14 She was so overjoyed when she recognized Peter’s voice that, instead of opening the gate, she ran in and announced that Peter was standing at the gate.
15 They told her, “You are out of your mind,” but she insisted that it was so. But they kept saying, “It is his angel.”
16 But Peter continued to knock, and when they opened it, they saw him and were astounded.
17 He motioned to them with his hand to be quiet and explained [to them] how the Lord had led him out of the prison, and said, “Report this to James and the brothers.” Then he left and went to another place."

Last year when Pope Benedict XVI may have been going through a time of crisis of his own, he delivered a talk on this liberation of St Peter. In retrospect the talk has great resonance

"The narrative is once again marked by the prayer of the Church. St Luke writes: “So Peter was kept in prison; but earnest prayer for him was made to God by the church” (Acts 12:5). And, after having miraculously left the prison, on the occasion of his visit to Mary’s house, the mother of John also called Mark, it tells us “many were gathered together and were praying” (Acts 12:12).

Between these two important observations that illustrate the attitude of the Christian community in the face of danger and persecution, is recounted the detainment and release of Peter, during the entire night. The strength of the unceasing prayer of the Church rises to God and the Lord listens and performs an unheard of and unexpected deliverance, sending his Angel. ...

The light that fills the prison cell, the same action to awaken the Apostle, refers to the liberating light of the Passover of the Lord that triumphs over the darkness of night and evil. Finally, the invitation to “Wrap your mantle around you and follow me” (Acts 12:8) echoes the words of the initial call of Jesus in our hearts (cf. Mk 1:17), repeated after the Resurrection on Lake Tiberias, where on two occasions the Lord says to Peter, “Follow me” (Jn 21:19,22).

It is a pressing call to follow him. Only by coming out of ourselves to walk with the Lord and by doing his will can we live in true freedom.

I would also like to highlight another aspect of Peter’s attitude in prison. In fact, we note that while the Christian community is praying earnestly from him, Peter “was sleeping” (Acts 12:6). In a critical situation of serious danger, it is an attitude that might seem strange, but instead denotes tranquility and faith. He trusts God. He knows he is surrounded by the solidarity and prayers of his own people and completely abandons himself into the hands of the Lord.

So it must be with our prayer, assiduous, in solidarity with others, fully trusting that God knows us in our depths and takes care of us to the point that Jesus says “even the hairs of your head are all numbered. Fear not, therefore” (Mt 10:30-31). ...

[T]he episode of the liberation of Peter as told by Luke tells us that the Church, each of us, goes through the night of trial. But it is unceasing vigilance in prayer that sustains us.

I too, from the first moment of my election as the Successor of St Peter, have always felt supported by your prayer, by the prayers of the Church, especially in moments of great difficulty. My heartfelt thanks.

With constant and faithful prayer the Lord releases us from the chains, guides us through every night of imprisonment that can gnaw at our hearts. He gives us the peace of heart to face the difficulties of life, persecution, opposition and even rejection.

Peter’s experience shows us the power of prayer. And the Apostle, though in chains, feels calm in the certainty of never being alone. The community is praying for him. The Lord is near him. He indeed knows that Christ’s “power is made perfect in weakness” (2 Cor 12:9).

Constant and unanimous prayer is also a precious tool to overcome any trial that may arise on life’s journey, because it is being deeply united to God that allows us also to be united to others."