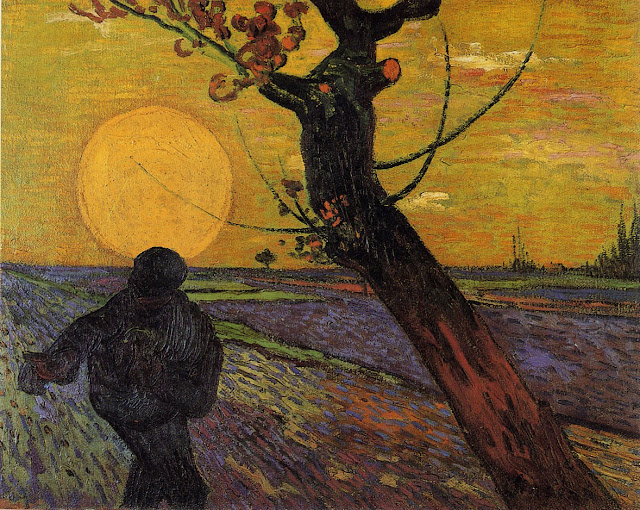 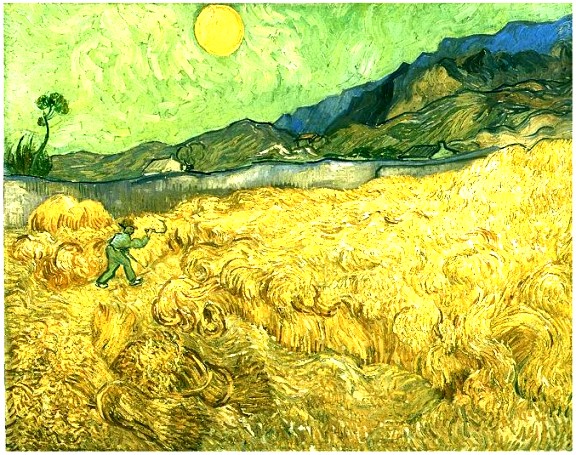 
Van Gogh`s  father was the Minister of the small Reformed congregation in Nuenen. Van Gogh`s knowledge of Scripture was profound and he tried at one stage to become a minister too

The parables of Christ appear to have been among his favourite passages. The Sower is one of his constant references. As is the parable of the grain of wheat in John 12. Fields of golden wheat are one of his main themes

I say this to show why I find it so silly to talk about gifts and no gifts.

But if one wants to grow, one must fall into the earth. So I say to you, plant yourself in the soil of Drenthe — you will sprout there. Don’t shrivel up on the pavement. You’ll say that there are city plants — well yes, but you are wheat and belong in the wheatfield"

The connection between wheat and the Eucharist needs no explanation

In a recent visit to Scotland Archbishop Gerhard Ludwig Müller, prefect of the Congregation for the Doctrine of the Faith gave a series of major speeches/homilies to a beleaguered Scottish Church

In this text St John allows us to overhear Jesus praying to his Father. The prayer, in fact, ends with the words, “Father, glorify your name”, a phrase familiar to us from other reported prayers of Jesus.

But there is something unusual, all the same, about the prayer. It is not uttered in solitude, alone with his Father, in preparation for some major decision; nor is it said in the remote solitude of a high mountain; nor at the Last Supper with a few chosen friends; nor in the solitude of the Garden of Gethsemane.

No – while Jesus is praying, he is surrounded by all kinds of different people.

The text speaks, first of all, of a number of Greeks who had arrived in time for the Feast, and who had expressed the desire “to see Jesus”. Then Philip and Andrew are mentioned.
And, finally, we hear of a crowd of bystanders.

What is impressive here is that, although Jesus finds himself surrounded by all kinds of noise and commotion, and by different individuals seeking his attention, he is still able to find time to pray.

And that, of course, is what is encouraging to witness in the lives of many hard-working parish priests today. Their life of prayer does not take place in the quiet solitude of a monastery, but instead at the pulsing heart of a busy parish with all its pressures and demands.

A life of dedicated prayer, in other words, but one achieved against the odds, and in the midst of the world.

The prayer spoken by Jesus to his Father is brief but unforgettable. He says:

“Now my soul is troubled. And what shall I say? Save me from this hour? No, for this purpose I have come to this hour. Father, glorify your name.”

Just before he pronounced this prayer, while the crowd were listening, Jesus did not hesitate to deliver a number of robust and challenging statements.

Here is one, for example: “Whoever loves his life loses it, and whoever hates his life in this world will keep it for eternal life.” A hard saying indeed! The words themselves: confident, hard-edged, and authoritative.

But, when Jesus starts to pray, moments later, we have the impression that, all of a sudden, he has been struck by the force and meaning of his own words.

It is a rare moment in a Johannine text: this sudden, hurt inwardness, this dawning realization, on the part of Jesus, of the sacrifice that is being asked of him:

The most human thing in the world is to want to avoid the cross, and to want to say to God “Save me from this hour”.

But if, in those moments of great fear and anxiety, we fall back on his grace, and on his strength as God, we will find courage to say, “No, for this purpose I have come to this hour. Father, glorify your name.”

In a homily on the Fifth Sunday of Lent, 29 March 2009, Pope Benedict XVI spoke of this passage in Scripture:

"In the request of these anonymous Greeks we can interpret the thirst to see and to know Christ which is in every person's heart; and Jesus' answer orients us to the mystery of Easter, the glorious manifestation of his saving mission.

The hour of the glorification of the Son of man is at hand, but it will entail the sorrowful passage through his Passion and death on the Cross. Indeed the divine plan of salvation which is for everyone, Jews and Gentiles alike will only be brought about in this manner. Actually, everyone is invited to be a member of the one people of the new and definitive Covenant.

In this light, we also understand the solemn proclamation with which the Gospel passage ends: "and I, when I am lifted up from the earth, will draw all men to myself" (Jn 12: 32), and likewise the Evangelist's comment: "He said this to show by what death he was to die" (Jn 12: 33). The Cross: the height loftiness of love is the loftiness of Jesus and he attracts all to these heights. ...

What our association with his mission consists of is explained by the Lord himself. In speaking of his forthcoming glorious death, he uses a simple and at the same time evocative image: "unless a grain of wheat falls into the earth and dies, it remains alone; but if it dies, it bears much fruit" (Jn 12: 24).

He compares himself to a "grain of wheat which has split open, to bring much fruit to others", according to an effective statement of St Athanasius; it is only through death, through the Cross that Christ bears much fruit for all the centuries.

Indeed, it was not enough for the Son of God to become incarnate.

To bring the divine plan of universal salvation to completion he had to be killed and buried: only in this way was human reality to be accepted, and, through his death and Resurrection, the triumph of Life, the triumph of Love to be made manifest; it was to be proven that love is stronger than death."