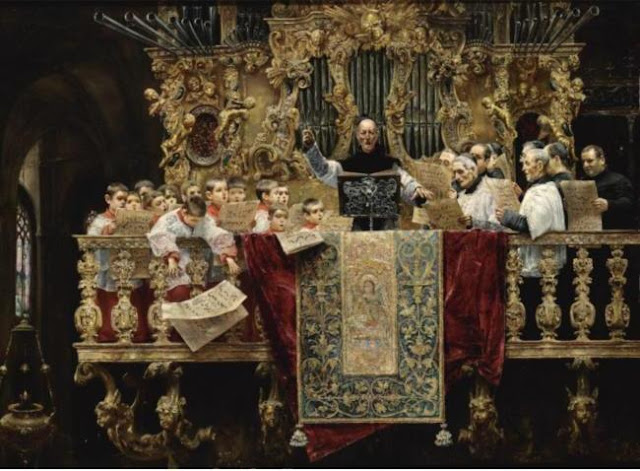 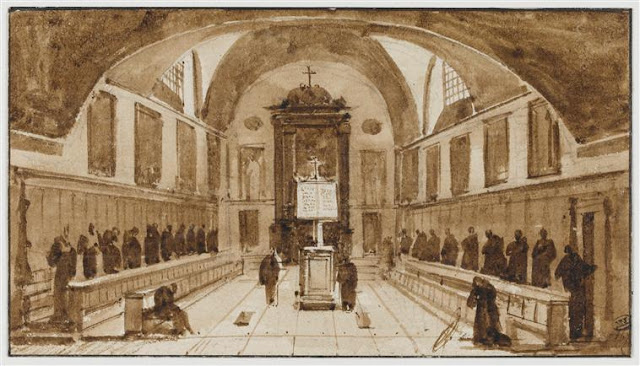 Pope Pius XII in Musicae Sacrae discussed the orgins of sacred music: singing and the playing of musical instruments particularly the organ

"6. No one, therefore, will be astonished that always and everywhere, even among pagan peoples, sacred song and the art of music have been used to ornament and decorate religious ceremonies. This is proved by many documents, both ancient and new. No one will be astonished that these arts have been used especially for the worship of the true and sovereign God from the earliest times. Miraculously preserved unharmed from the Red Sea by God's power, the people of God sang a song of victory to the Lord, and Miriam, the sister of Moses, their leader, endowed with prophetic inspiration, sang with the people while playing a tambourine.

7. Later, when the ark of God was taken from the house of Abinadab to the city of David, the king himself and "all Israel played before the Lord on all manner of instruments made of wood, on harps and lutes and timbrels and cornets and cymbals." King David himself established the order of the music and singing used for sacred worship.This order was restored after the people's return from exile and was observed faithfully until the Divine Redeemer's coming.

8. St. Paul showed us clearly that sacred chant was used and held in honor from the very beginning in the Church founded by the Divine Redeemer when he wrote to the Ephesians: "Be filled with the Spirit, speaking to one another in psalms and hymns and spiritual songs." He indicates that this custom of singing hymns was in force in the assemblies of Christians when he says: "When you come together each of you has a hymn."

9. Pliny testifies that the same thing held true after apostolic times. He writes that apostates from the Faith said that "this was their greatest fault or error, that they were accustomed to gather before dawn on a certain day and sing a hymn to Christ as if He were God." These words of the Roman proconsul in Bithynia show very clearly that the sound of church singing was not completely silenced even in times of persecution.

10. Tertullian confirms this when he says that in the assemblies of the Christians "the Scriptures are read, the psalms are sung, sermons are preached."

11. There are many statements of the fathers and ecclesiastical writers testifying that after freedom and peace had been restored to the Church the psalms and hymns of liturgical worship were in almost daily use. Moreover, new forms of sacred chant were gradually created and new types of songs were invented. These were developed more and more by the choir schools attached to cathedrals and other important churches, especially by the School of Singers in Rome.

12. According to tradition, Our predecessor of happy memory, St. Gregory the Great, carefully collected and wisely arranged all that had been handed down by the elders and protected the purity and integrity of sacred chant with fitting laws and regulations.

13. From Rome, the Roman mode of singing gradually spread to other parts of the West. Not only was it enriched by new forms and modes, but a new kind of sacred singing, the religious song, frequently sung in the vernacular, was also brought into use.

14. The choral chant began to be called "Gregorian" after St. Gregory, the man who revived it. It attained new beauty in almost all parts of Christian Europe after the 8th or 9th century because of its accompaniment by a new musical instrument called the "organ." Little by little, beginning in the 9th century, polyphonic singing was added to this choral chant. The study and use of polyphonic singing were developed more and more during the centuries that followed and were raised to a marvelous perfection under the guidance of magnificent composers during the 15th and 16th centuries.

15. Since the Church always held this polyphonic chant in the highest esteem, it willingly admitted this type of music even in the Roman basilicas and in pontifical ceremonies in order to increase the glory of the sacred rites. Its power and splendor were increased when the sounds of the organ and other musical instruments were joined with the voices of the singers.

16. Thus, with the favor and under the auspices of the Church the study of sacred music has gone a long way over the course of the centuries. In this journey, although sometimes slowly and laboriously, it has gradually progressed from the simple and ingenuous Gregorian modes to great and magnificent works of art. To these works not only the human voice, but also the organ and other musical instruments, add dignity, majesty and a prodigious richness.

17. The progress of this musical art clearly shows how sincerely the Church has desired to render divine worship ever more splendid and more pleasing to the Christian people. It likewise shows why the Church must insist that this art remain within its proper limits and must prevent anything profane and foreign to divine worship from entering into sacred music along with genuine progress, and perverting it."

"8. The importance of preserving and increasing the centuries-old patrimony of the Church spurs us to take into particular consideration a specific exhortation of the Constitution Sacrosanctum Concilium: "Choirs must be assiduously developed, especially in cathedral churches"

In turn, the Instruction Musicam Sacram explains the ministerial task of the choir:

"Because of the liturgical ministry it exercises, the choir (cappella musicale or schola cantorum) should be mentioned here explicitly. The conciliar norms regarding the reform of the Liturgy have given the choir's function greater prominence and importance. The choir is responsible for the correct performance of its part, according to the differing types of song, to help the faithful to take an active part in the singing. Therefore,... choirs are to be developed with great care, especially in cathedrals and other major churches, in seminaries and in religious houses of study"

The schola cantorum's task has not disappeared: indeed, it plays a role of guidance and support in the assembly and, at certain moments in the Liturgy, has a specific role of its own.

From the smooth coordination of all - the priest celebrant and the deacon, the acolytes, the altar servers, the readers, the psalmist, the schola cantorum, the musicians, the cantor and the assembly - flows the proper spiritual atmosphere which makes the liturgical moment truly intense, shared in and fruitful. The musical aspect of liturgical celebrations cannot, therefore, be left to improvisation or to the arbitration of individuals but must be well conducted and rehearsed in accordance with the norms and competencies resulting from a satisfactory liturgical formation"