St John the Baptist: the Witness 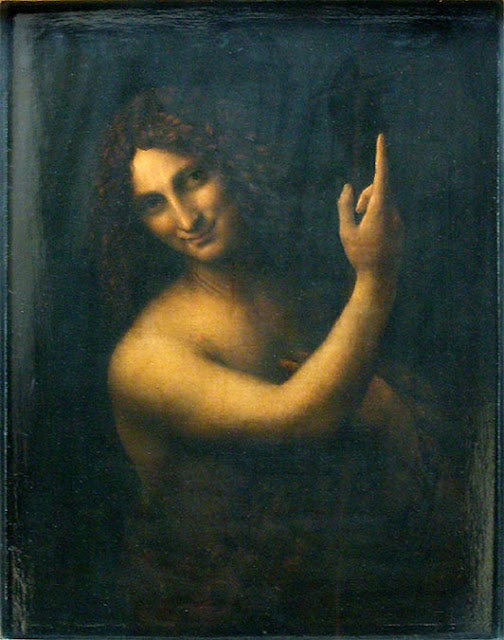 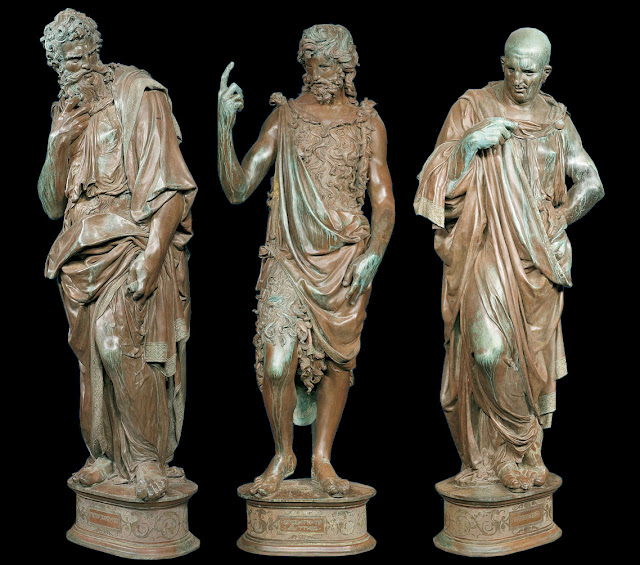 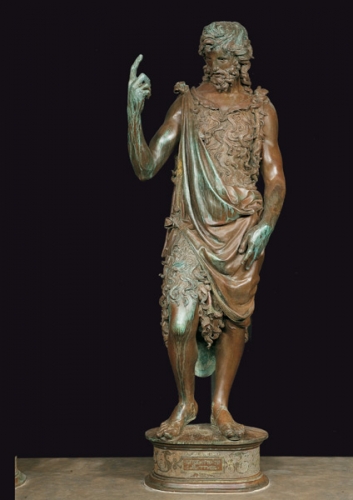 Giovan Francesco Rustici (1474–1554)
St. John the Baptist Preaching to a Pharisee and a Levite 1506 - 09
Bronze sculptures
Formerly above the North door now inside
The Baptistry, Florence 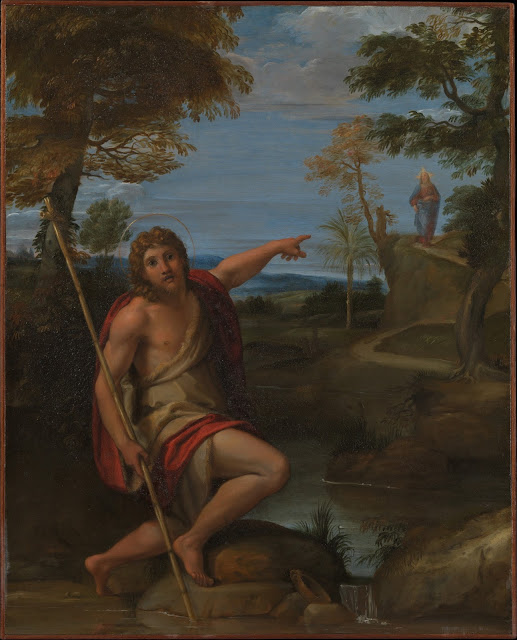 
St John the Baptist was and is the Patron saint of Florence. Leonardo and Rustici would have been aware of the great devotion to St John among all strata of Florentine society

According to Vasari, Rustici was Leonardo's zealous student and enjoyed his master's help in sculpting his large group in bronze of "St. John the Baptist Preaching" over the north door of the Baptistry.

Both Leonardo`s work and Rustici`s work have the unusual gesture of St John the Baptist pointing upwards. The show John foretelling what is to come.

In Rustici`s work, the lines of each protagonist - the Baptist, the Priest and the Levite -  are inscribed, anachronistically, in Hebrew rather than Aramaic on the base of each statue.

Carraci`s work focuses on John calling Christ "the Lamb of God who takes away the sin of the world" - the same prayer repeated in the Mass. The words spoken by John when Christ came to meet him face to face.

One day while baptising in the Jordan, John is confronted and questioned by the Pharisees and Levites as to who he is. John says that he is not the Messiah. The next day, by the waters of the Jordan, John the Baptist sees Jesus and testifies about Jesus to his disciples:

“I am ‘the voice of one crying out in the desert,
“Make straight the way of the Lord,”

as Isaiah the prophet said.”
24 Some Pharisees were also sent.
25 They asked him, “Why then do you baptize if you are not the Messiah or Elijah or the Prophet?”
26 John answered them, “I baptize with water; but there is one among you whom you do not recognize,
27 the one who is coming after me, whose sandal strap I am not worthy to untie.”
28 This happened in Bethany across the Jordan, where John was baptizing.
29 The next day he saw Jesus coming toward him and said, “Behold, the Lamb of God, who takes away the sin of the world.
30 He is the one of whom I said, ‘A man is coming after me who ranks ahead of me because he existed before me.’
31 I did not know him, but the reason why I came baptizing with water was that he might be made known to Israel.”
32 John testified further, saying, “I saw the Spirit come down like a dove from the sky and remain upon him.
33 I did not know him, but the one who sent me to baptize with water told me, ‘On whomever you see the Spirit come down and remain, he is the one who will baptize with the holy Spirit.’
34 Now I have seen and testified that he is the Son of God.”

This passage of Scripture is problematic especially verse 31.

When John says:  I did not know him, this gospel shows no knowledge of the tradition (Lk 1) about the kinship of Jesus and John the Baptist.

John the Baptist explains that his baptism is not connected with forgiveness of sins; its purpose is revelatory, that Jesus may be made known to Israel

"Martyrdom, the exaltation of the inviolable holiness of God's law

91. In the Old Testament we already find admirable witnesses of fidelity to the holy law of God even to the point of a voluntary acceptance of death ...

At the dawn of the New Testament, John the Baptist, unable to refrain from speaking of the law of the Lord and rejecting any compromise with evil, "gave his life in witness to truth and justice", and thus also became the forerunner of the Messiah in the way he died (cf. Mk 6:17-29).

"The one who came to bear witness to the light and who deserved to be called by that same light, which is Christ, a burning and shining lamp, was cast into the darkness of prison... The one to whom it was granted to baptize the Redeemer of the world was thus baptized in his own blood". (Saint Bede the Venerable, Homeliarum Evangelii Libri, II, 23: CCL 122, 556-557)"

See also Blessed Pope John Paul II Homily on Sunday, 10 December 2000 for the Jubilee of Catechists and Teachers of Religion

"Who is John the Baptist?

First of all he is a believer personally committed to a demanding spiritual journey, consisting of attentive and constant listening to the Word of salvation.

He also bears witness to a way of life that is detached and poor; he shows great courage in proclaiming God's will to everyone, even to its ultimate consequences.

He does not yield to the easy temptation to take a prominent role, but humbly lowers himself to exalt Jesus."