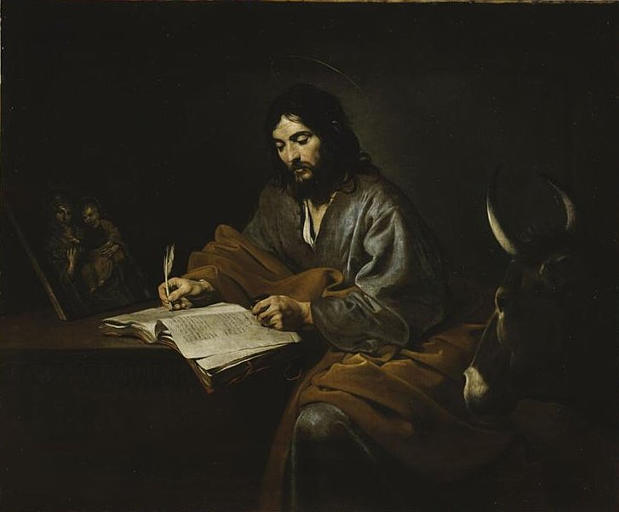 Valentin de Boulogne (Le Valentin) 1591 - 1632
Saint Luke
c. 1625
Oil on wood panel
120 x 146 cm
Musée national des châteaux de Versailles et de Trianon, Versailles
Valentin`s father and uncle were artists. He was trained by the French artist Simon Vouet
In Rome he was influenced by Michelangelo Merisi da Caravaggio and Bartolomeo Manfredi.
But this work of Saint Luke was commissioned by King Louis XIV of France.
The author saint is writing his work.
According to the early Church historian Eusebius Luke was born at Antioch in Syria.
He is also an artist. On the table there seems to be a painting by him of the Virgin and St John. Without Luke, would we know of the Annunciation and the importance of Mary ?
By tradition he was also a doctor.
Looking on is an ox, the symbol of the Evangelist due to the fact of the account at the beginning of the Gospel of the sacrifice of the calf.
But unlike other paintings of the Evangelist, this work has reality, the ring of truth.
The common author of the Third Gospel and the Acts of the Apostles dedicated his two volume work to one Theophilus (Friend of God or Lover of God or Beloved by God)
The hero of Volume One - Luke`s Gospel - is Christ. His follow-up Volume Two - The Acts - is about the Spirit.
He wrote:

"1 In my former book, Theophilus, I wrote about all that Jesus began to do and to teach
2 until the day he was taken up to heaven, after giving instructions through the Holy Spirit to the apostles he had chosen. ...
7 He said to them: It is not for you to know the times or dates the Father has set by his own authority.
8 But you will receive power when the Holy Spirit comes on you; and you will be my witnesses in Jerusalem, and in all Judea and Samaria, and to the ends of the earth.
9 After he said this, he was taken up before their very eyes, and a cloud hid him from their sight."(Acts 1: 1 - 2; 7 - 9)

Why did he write ? So that Theophilus and all Friends of God would know the Truth of what they had been taught. He wrote:

"3 it seemed fitting for me as well, having investigated everything carefully from the beginning, to write it out for you in consecutive order, most excellent Theophilus;
4 so that you may know the exact truth about the things you have been taught." (Luke 1:3-4)

He appears to have accompanied St Paul on some of his journeys. In Acts we learn that at Troas he meets St. Paul, and, after the vision, crossed over with him to Europe as an Evangelist, landing at Neapolis and going on to Philippi, "being assured that God had called us to preach the Gospel to them" Apart from Paul`s Letters, Acts is the main source about the life of St Paul
He is also why we know about St Stephen, his life and thought. St Luke dedicates two whole chapters to him and the Ministry of Deacons.
His writings are open to universalism and well disposed towards Israel
Luke is one of the most extensive writers in the New Testament. Without the written witness of St Luke, Christianity would now be something entirely and radically different from today assuming that it had even survived.
Posted by Unknown at 11:50 am