Christ after the Flagellation contemplated by the Christian Soul 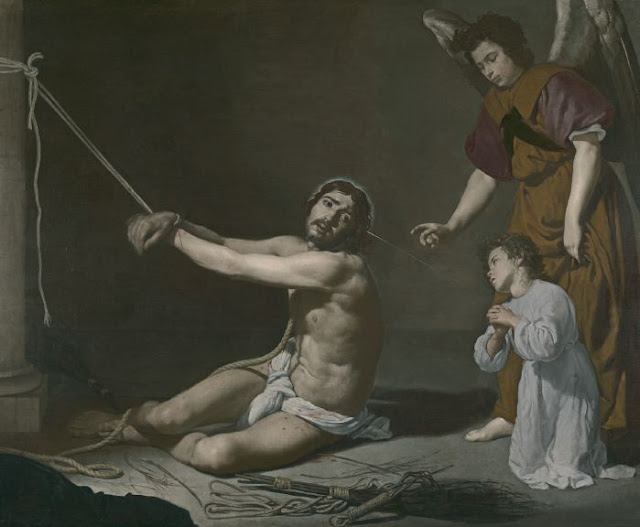 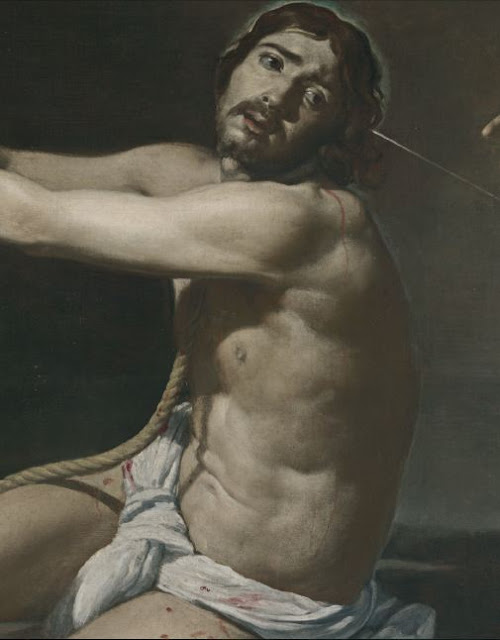 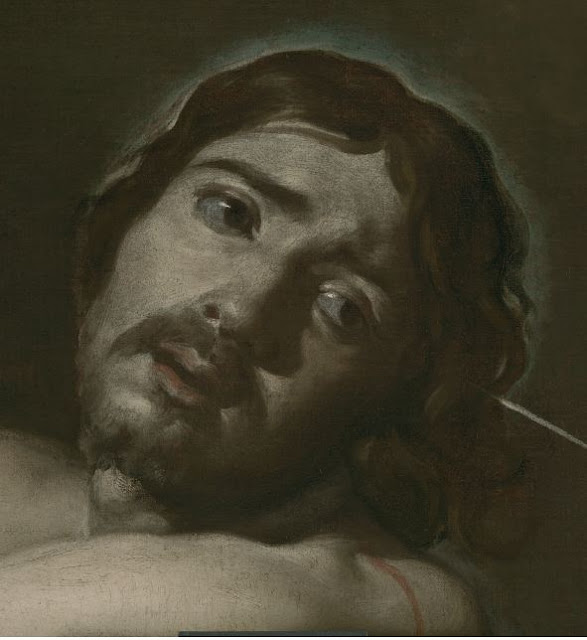 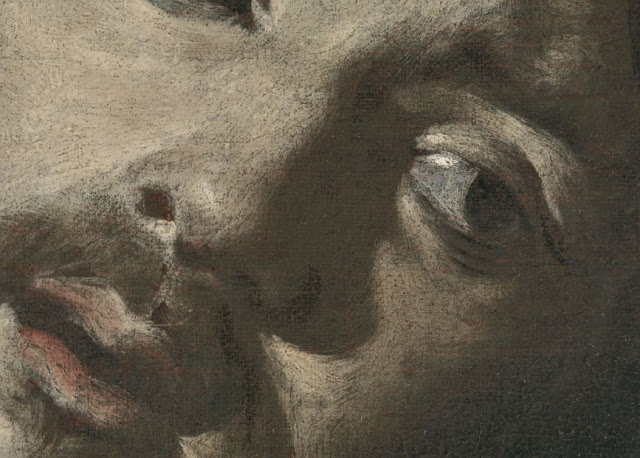 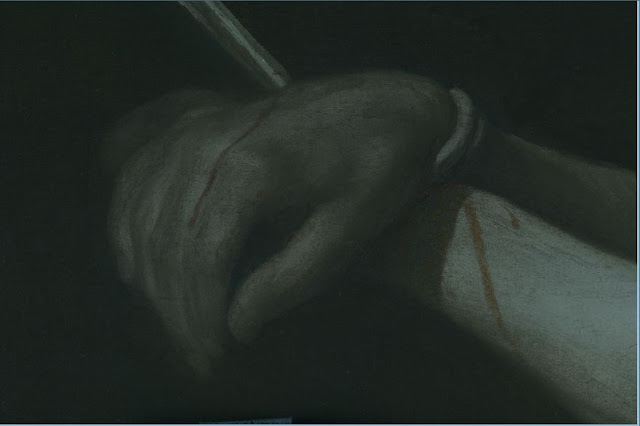 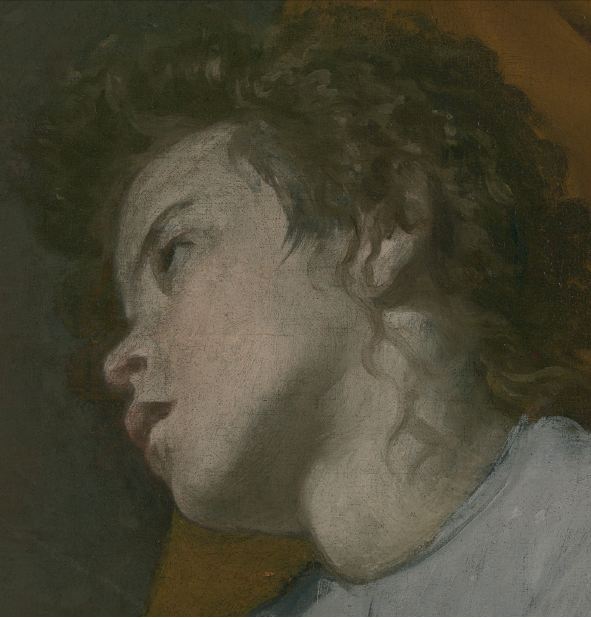 Diego Velázquez
1599 - 1660
Christ after the Flagellation contemplated by the Christian Soul
probably 1628-9
Oil on canvas
165.1 x 206.4 cm
The National Gallery, London
The National Gallery in London attracts hordes of foreign visitors of all nations, cultures and religions. One often wonders what they think of some of the great paintings. This is one of them
What would a life long Buddhist or Shinoist make of this painting in a few minutes assuming of course he or she stopped for a look in the first place
Velázquez here painted a rare subject, one which seems to have begun after the Counter-Reformation but even then still rarely painted
Christ is seen tied up after being whipped at the Flagellation by the Roman soldiers
A Guardian angel brings along the Human Soul (personified by the child) to contemplate His suffering
The soul looks on Christ. Christ seems to be looking on the soul.
The weapons of torture are in the foreground
Prior to the seventeenth century, compositions of Christ at the column were common as were compositions of Guardian Angels. But the combining of the two separate compositions as we see here appears to have only begun about 1616 and only in Andalusian art
Some are of the view that this composition was "designed" by the priest and Spanish artist Juan de Roelas o Ruelas (nicknamed the Spanish Tintoretto and the Spanish Veronese 1570 - 1625) for King Philip III
Roelas` work in the Real Monasterio de la Encarnación in Madrid is dated 1616 and has the inscription:

"O Soul, take pity on me for you have reduced me to this state."

It invites meditation on the Passion and to contemplative prayer
Velázquez through his marriage had close connections with the newly formed Company of Jesus in and around Seville. His father in law was Francisco Pacheco
Two of the most important works of Catholic spirituality of the period were Saint Ignatius of Loyola's Spiritual Exercises and Father Jerome Nadal S J `s (1507-1580) series of illustrated meditations on the Gospels, Annotations and Meditations on the Gospels (Adnotationes et meditationes in Evangelia, first published in Antwerp in 1595)
At the start of the first meditation in the Spiritual Exercises, Saint Ignatius advises that one should ‘see the place’, and he calls this ‘prelude’ or preliminary the ‘composition’. He describes the process as follows:

"It should be noted here that for contemplation or meditation about visible things, for example a contemplation on Christ our Lord (who is visible), the ‘composition’ will consist in seeing through the gaze of the imagination the material place where the object I want to contemplate is situated.
By ‘material place’ I mean for example a temple or a mountain where Jesus Christ or our Lady is to be found—according to what I want to contemplate.
Where the object is an invisible one, as is the case in the present meditation on sins, the composition will be to see with the gaze of the imagination, and to consider, that my soul is imprisoned in this body which will one day disintegrate, and also my whole composite self (by this I mean the soul joined with the body), as if exiled in this valley among brute beasts." (Exx 47) (translation by Michael Ivens (Leominster: Gracewing, 2004).

Nadal composed his Annotations at the instigation of Saint Ignatius, and their main purpose was to teach student members of the Society of Jesus how to meditate and pray.
The central feature of the work were the many engravings. The aim was to allow interaction or conversation between the reader (viewer) and the figure of Christ depicted in the engravings and within the narratives in the annotations and within the location depicted.
One therefore wonders if this work by Velázquez was meant for a seminary of novitiates, possibly of the Jesuit order. The influence of Nadal can not be underestimated. In his Arte de la pintura, Pacheco often approvingly cited Nadal's unsurpassed expertise in orthodox Catholic iconography In describing how one ought to paint the Visitation, Pacheco said that one ought to paint it "asi lo estampo el padre Nadal".
(The 1595 edition of Adnotationes et meditationes in Evangelia : [cum Imaginibus et lineis rubris] by Gerónimo Nadal can be accessed by following this link )
This work still impresses.
The artist Leon Kossoff has made a number of etchings and prints of this work. Three are at the Tate. According to the Tate:

"Kossoff has made drawings after paintings by Velazquez and other old masters at The National Gallery for most of his life, since first visiting it in the late 1940s. His commitment to drawing has resulted in a decades-long dialogue with Velazquez and others. " 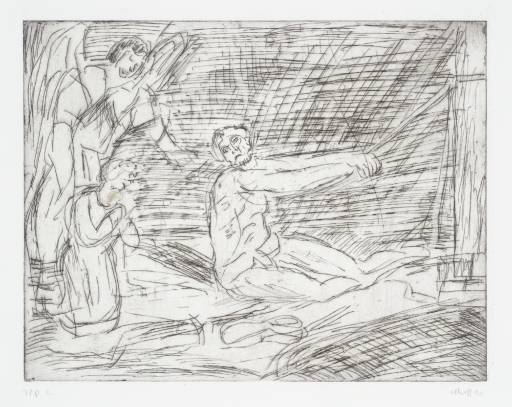 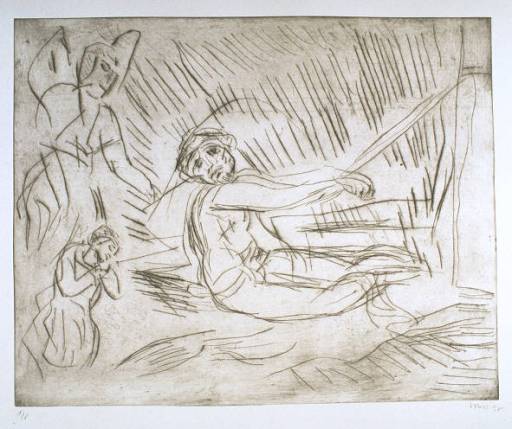