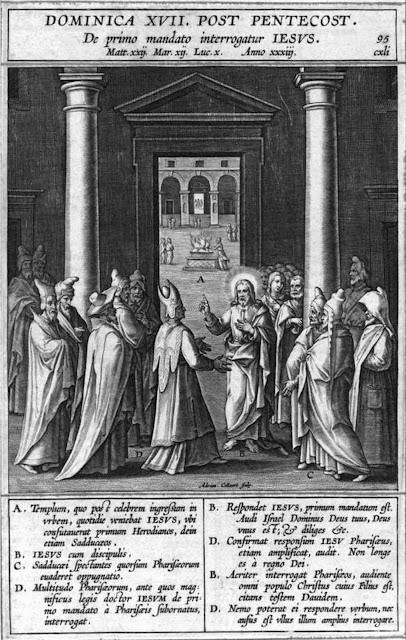 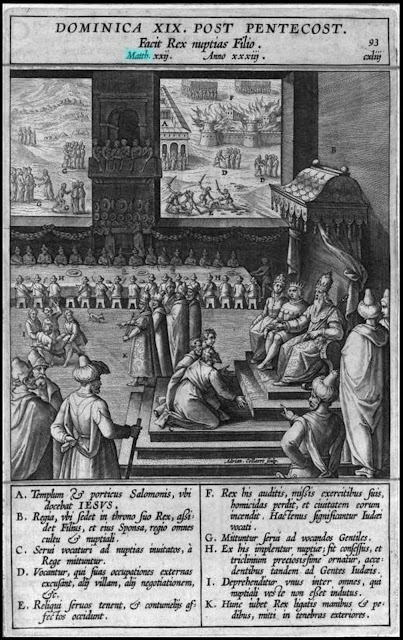 Matthew 22 is illustrated twice in The Evangelicae historiae imagines (Images of Gospel History) by Father Jerome Nadal (1507-1580) - see posts below
Matthew 22 starts with Jesus narrating the Parable of the Wedding Banquet (verses 1 - 14). It ends with the rather ominous words and lesson:

“For many are invited, but few are chosen.”

The rest of the Chapter in Matthew narrates how the Pharisees and their allies tried to put Jesus to the test - to try to trick him up
First the Pharisees` disciples asked if it was right to pay taxes or tribute to Caesar. He asks for a denarius, asks whose head is on the denarius (Caesar`s) and then says
“So give back to Caesar what is Caesar’s, and to God what is God’s.” (vv 15 - 22)
Next the Sadducees come along to trick him. The Sadducees did not believe in the Resurrection. They referred to the Mosaic rule that a if a man dies without having children, his brother must marry the widow and raise up offspring for him. They asked at the resurrection whose wife would she be .
Jesus turns the tables on them:

"29 Jesus replied, “You are in error because you do not know the Scriptures or the power of God. 30 At the resurrection people will neither marry nor be given in marriage; they will be like the angels in heaven. 31 But about the resurrection of the dead—have you not read what God said to you, 32 ‘I am the God of Abraham, the God of Isaac, and the God of Jacob’? He is not the God of the dead but of the living.”

Having seen off the disciples of the Pharisees and the Sadducees, the Pharisees decide to bring out the big guns. They bring in their expert in the Law.

Jesus finally defeats the Pharisees by posing one of his own questions about how if the Messiah is the Son of David, then

The Pharisees leave with their tails between their legs.
But the section where Christ states the Two Great Commandments: Love your God and Love your neighbour is probably the best known. It was this passage of the challenge of the Pharisees and his reply which was the subject of a homily by Pope Benedict XVI at the Vatican Basilica on Sunday, 26 October 2008
It was given at a special Mass for Bishops and priests at the conclusion of the Twelfth Ordinary General Assembly of the Synod of Bishops
Of this passage in Matthew, he said:

"The Word of the Lord, resounding a short while ago in the Gospel, reminded us that the whole divine law is summarised in Love.
The Evangelist Matthew narrates that after Jesus had answered the Sadducees, silencing them, the Pharisees met to put him to the test (cf. 22: 34-35).
One of them, a doctor of law, asked him:

The question makes apparent the concern, present in ancient Jewish tradition, over finding a unifying principle in the various formulations of God's will.
This was not an easy question, considering that in the law of Moses, a good 613 precepts and prohibitions are contemplated. How does one discern, among all of these, which is the most important?
But Jesus does not hesitate, and readily responds:

Jesus quotes the Shemà in his answer, the prayer the pious Israelite recites several times a day, especially in the morning and in the evening (cf. Dt 6: 4-9; 11: 13-21; Nm 15: 37-41): the proclamation of the integral and total love due to God, as the only Lord.
Emphasis is placed on the totality of this dedication to God, listing the three faculties that define man in his deep psychological structures: heart, soul and mind.
The word mind, diánoia, contains the rational element.
God is not only the object of love, commitment, will and sentiment, but also of the intellect, which should not be excluded from this milieu.
Then, however, Jesus adds something which, in truth, had not been asked by the doctor of law:

The surprising aspect of Jesus' answer consists in the fact that he establishes a similarity between the first and the second commandments, defined this time too with a biblical formula drawn from the Levitical code of holiness (cf. Lv 19: 18).
And thus by the end of the passage the two commandments become connected in the role of a fundamental union upon which all of biblical Revelation rests:

The Gospel passage on which we are focusing makes clear that being disciples of Christ means practicing his teachings, which can be summarised in the first and greatest commandment of the divine law, the commandment of love. ...
The Readings in today's liturgy offers for our meditation remind us that the fulness of the law, as all of the divine Scriptures, is love.
Therefore anyone who believes they have understood the Scriptures, or at least some part of them, without undertaking to build, by means of their intelligence, the twofold love of God and neighbour, in reality proves to be still a long way from having grasped its deeper meaning.
But how can we put this commandment into practice, how can we live the love of God and our brothers without a living and intense contact with the Sacred Scriptures?
The Second Vatican Council asserts that "access to sacred Scripture ought to be open wide to the Christian faithful" (Dei Verbum, 22), so that persons, encountering the truth, may grow in authentic love.
This is a requisite that is indispensable for evangelization today."