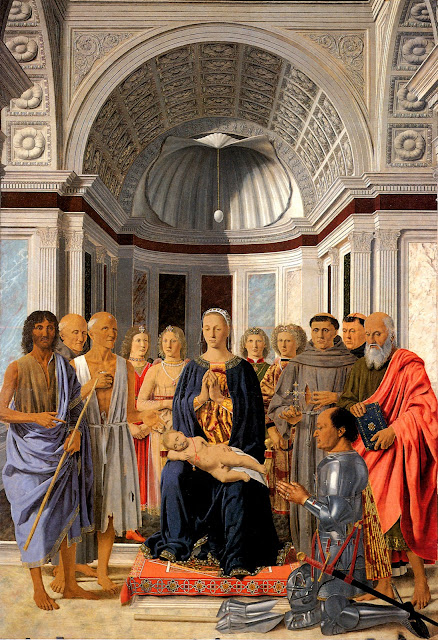 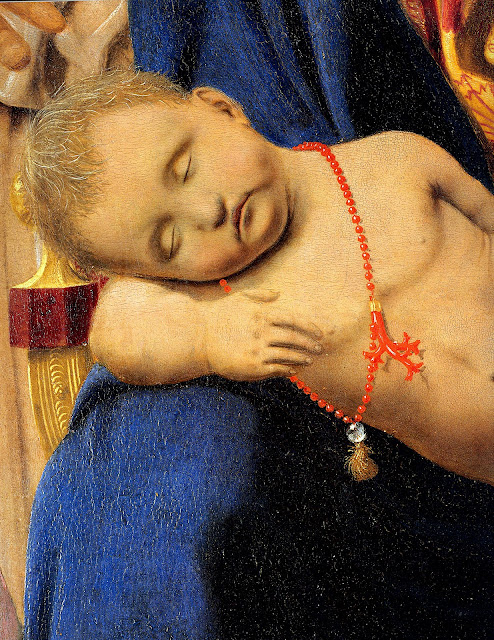 Piero della Francesca (c. 1415 – October 12, 1492)
The Brera Madonna (also known as the Pala di Brera, the Montefeltro Altarpiece or Brera Altarpiece)
1472-1474
Tempera on panel
248 cm × 150 cm
Pinacoteca di Brera, Milan
Much ink has been spilt on the ostrich egg pendant hanging by a chain from what seems a semi-dome above the Virgin Mary.
First, is it an ostrich egg ? Some have speculated that that is in fact a pearl coming out of the shell - a symbol of the Immaculate Conception.
However it does look oval not spherical. An egg would seem to be a preferred explanation
However some have said that if one looks at the painting from a certain perspective, the "egg" is oval and therefore could be a pearl.
Possibly, Piero della Francesca intended the ambiguity and the double meaning.
Second, if it is an ostrich egg what is the Christian symbolism of that ?
Pendant ostrich eggs were not unknown in medieval churches but they were rare. One can be seen in the painting below by the circle of Vittorio Carpaccio 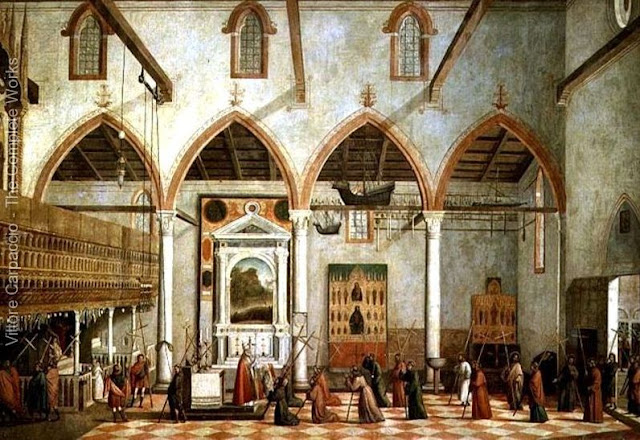 The circle of Vittore Carpaccio (1450-1525)
Apparition of the Crucified of Mount Ararat in the Church of Sant' Antonio di Castello, c.1512
Oil on canvas
Gallerie Dell' Accademia, Venice
They caused admiration and drew people to church. Ostriches and ostrich eggs were likely to have been considered rare exotica in medieval times
Ostrich-egg-lamps hang in Coptic , Armenian, Greek-Orthodox, and Nestorian Christians churches (for example in the Church of the Holy Sepulchre in Jerusalem) as well as in some Western cathedrals
In the Old Testament, the ostrich was not considered "a good creature". It is rejected like the jackal, the scapegoat
It was regarded as a cruel parent:

"Even the sea monsters draw out the breast, they give suck to their young ones : the daughter of my people is become cruel, like the ostriches in the wilderness" (Lamentations 4, 3)

When Job laments his low situation he describes himself as thelowest of the low rejected by everyone and God:

"A brother I have become to the jackals, and a companion to the young ostriches."(Job 30, 29)

Even God knows its faults and limitations as can seen from God`s speech to Job, although He does complement the creature on its speed:

"13 The wings of the ostrich flap joyfully,
though they cannot compare
with the wings and feathers of the stork.
14 She lays her eggs on the ground
and lets them warm in the sand,
15 unmindful that a foot may crush them,
that some wild animal may trample them.
16 She treats her young harshly, as if they were not hers;
she cares not that her labour was in vain,
17 for God did not endow her with wisdom
or give her a share of good sense.
18 Yet when she spreads her feathers to run,
she laughs at horse and rider." (Job 39: 13 - 18)

"The ostrich looks up to heaven in order to see when her time has come to lay her eggs. She does not lay before the Pleiades rise, at the time of the greatest heat. She lays her eggs in the sand and covers them with sand ; thereupon she goes away and forgets them, and the heat of the sun hatches them in the sand.
Since the ostrich knows her time, man ought to know his to a still higher degree : we have to look up toward heaven, forget worldly existence, and follow Christ."

It is therefore apt that the ostrich egg which has been rejected is compared like the stone that the builders rejected: the fragile and rejected egg becomes the key stone. And that is where Piero della Francesca painted it
Posted by Unknown at 6:25 pm