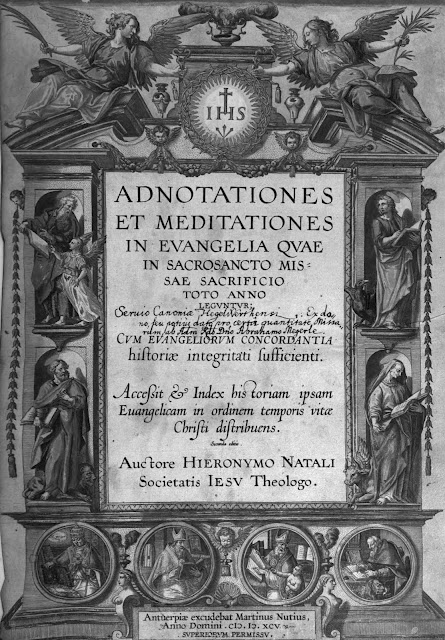 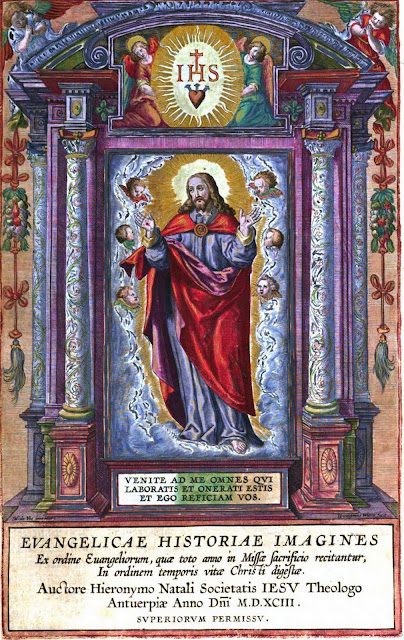 The Evangelicae historiae imagines (Images of Gospel History) by Father Jerome Nadal (also known as Hieronymus Natalis and Jerônimo Nadal) (1507-1580), consists of a series of 153 folio-size engravings, with a frontispiece.
These prints illustrate significant narrative elements developed in each of the Gospels read at the Mass on Sundays.
They map the travels of Christ, Mary and the disciples. The reader (or more accurately the exercisant) is meant to gaze on the images, not glance or treat the images as objets d`art. In his introduction, Ximenes said that they should be looked at for a day or more. Nadal wished the viewer or exercisant to memorise the images and consider and retrace the travels and what the images depicted
The accompanying written annotations (adnotationes) and meditations (meditationes) are aids to the contemplation of the images but more than simply complementary
Nadal’s magnum opus assisted and reinforced the Exercises of St Ignatius Loyola , giving visual representations of the scenes to be meditated upon.
Saint Ignatius explained that “under the name of Spiritual Exercises is understood every method of examination of conscience, of meditation, of contemplation, of vocal and mental prayer, and of other spiritual operations”
The Adnotationes was commissioned by Saint Ignatius.
Juan Polanco, the secretary to St Ignatius , wrote that Nadal understood the founder's spirit more profoundly than anyone else he knew in the Society.
The engravings were by Hieronymus Wiericx after designs by Marten de Vos. The work was first published in Antwerp in 1595 by the Wiericx brothers. Nadal wrote the text between 1568 and 1576.
Later, the Jesuit Giovanni Battista Fiammeri completed a handful of images for the Adnotationes as did Bernardino Passeri
The images from the Adnotationes were meant to ingrain the Gospel passage into the memory of the reader.
Central to the work is the centrality of Christ in time and place
Nadal explained that one must not simply see an image, but experience it spiritually, using the external senses. Placing oneself into images one should imagine the sounds and the smells of the surrounding actions.
Natalis believed that visual imagery arose from imitation and representation and could embrace and express modes of experience beyond the scope of words.
Jerusalem and the locations in the Holy Land could be any where and at any time, allowing devotees to put experience the event as if present themselves using their own experience of everyday scenes and environments.
It has been described as "Jesuit Aristotelianism".
By linking the images and meditations to the liturgical calendar the Adnotationes were meant to deepen the experience of the liturgy and vice versa. Meditatio and acclamatio. The distinction between meditative prayer and liturgical prayer became blurred to the advantage of both.
Here are the sections of the Book on Lazarus (the brother of Martha and Mary) , his death and his resurrection by Jesus. 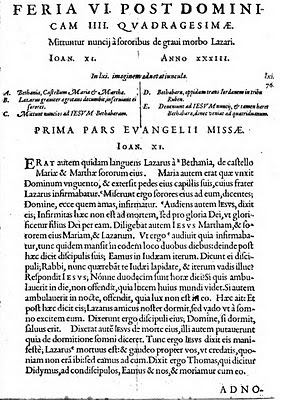 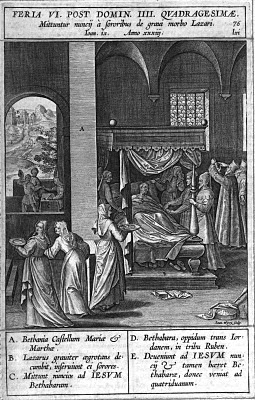 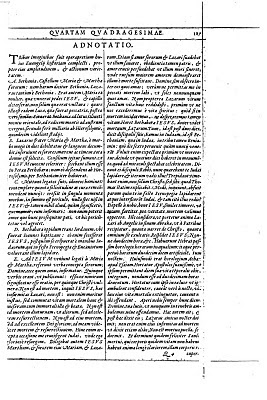 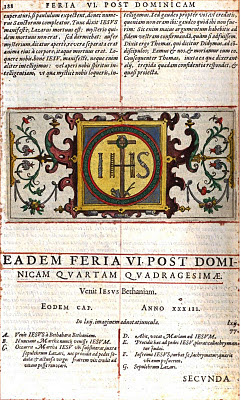 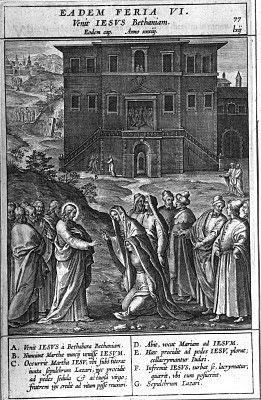 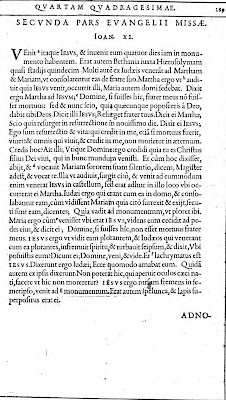 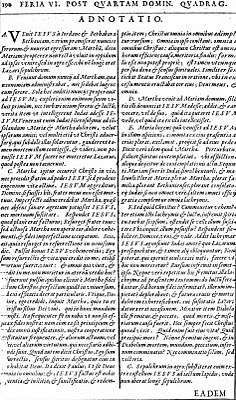 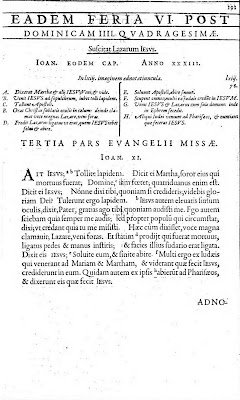 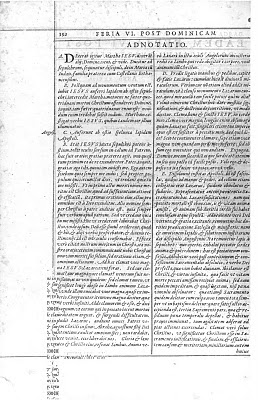 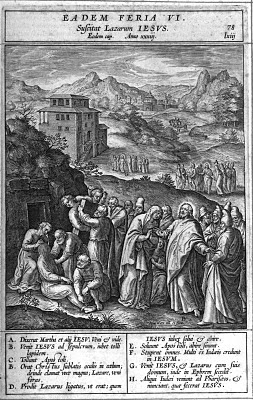 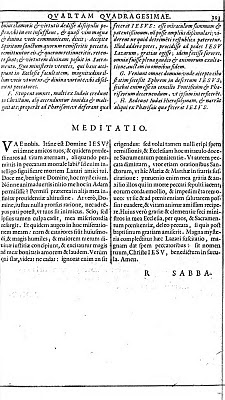 Under each print is a series of legends explaining what each part of the image is meant to represent.
M. Nicolau, in Jeronimo Nadal, sus obras y doctrinas espirituales, Madrid, 1949. explains the procedure in this way:

"The manner in which these engravings reproduce the life of the Saviour is as follows.
A primary scene, the nucleus of the evangelical act commemorated, first catches our eye. However, either in the landscape background, or through the aperture of a window, or perhaps in the vicinity of the architecture depicted, there will appear letters demarcating different scenes connected with the principal representation.
These other scenes, usually situated as though they were seen in the distance, either represent the preceding steps, leading up to the main event, or they may represent successive steps, deriving from the main event, or they may also make allusions to the metaphorical language to which the evangelical narration refers. . . .
The first letters of the alphabet discretely signal those other parts at the same time that they refer to the "adnotationcula" containing the titles or epigraphs of those other scenes"

The images were meant for meditation. The annotations and meditations were an aid to understanding the image or images and thus to meditation. But the annotations and meditations are more than complementary to the images.
Of particular note in the illustrations is "the picture(s)-within-the-picture" which was essentially a medieval technique of narrative art
In Renaissance art, it was a throwback to an earlier art. The normal linear rules of time and the normal rules of distance are suspended. The technique is called displacement. The technique is extremely noticeable in the works of the Counter-Reformation artists.
Posted by Unknown at 9:07 pm