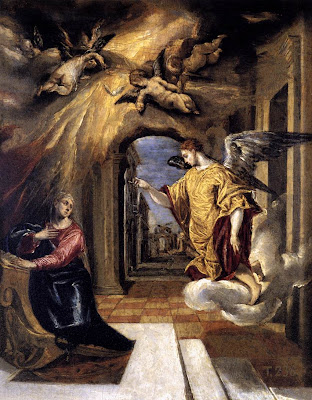 This version of the Annunciation was painted by El Greco when he was in Venice, before he went to Spain.

He spent about three years there before moving to Rome

In Venice he was influenced by the works of Titian and his successor, Tintoretto

Later on, El Greco produced a more mystical version of the same subject: more of a meditation on the Incarnation than a simple narrative based on St Luke`s Gospel.

See also:An Epiphany on the Annunciation
Posted by Unknown at 6:24 pm