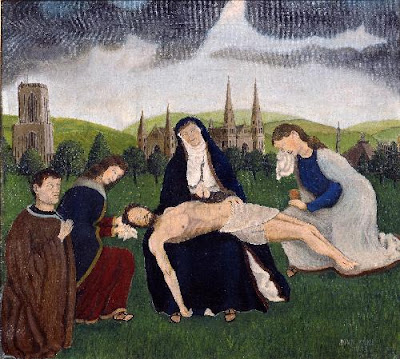 
John Kane (1860-1934) was born in West Calder, Scotland but only found recognition as an artist when he went to live in the United States.

He worked as a manual labourer all his life.

He was a devout Catholic. He was born to Irish parents. His father died when he was 10. His family emigrated to the United States when he was still young.

He was a self taught artist. Recognition came late: in 1927, his canvas Scene from the Scottish Highlands was admitted to the Carnegie International exhibition.

In 1897 he married at St. Mary's Catholic Church in downtown Pittsburgh

He died due to tuberculosis. But in the last few years he enjoyed some degree of fame. He exhibited at successive Internationals, as well as at Harvard, The Art Institute of Chicago, the Cincinnati Art Museum, the Whitney Museum of American Art, and The Museum of Modern Art.

He is buried in Pittsburgh's Roman Catholic Calvary Cemetery