An Epiphany on The Annunciation 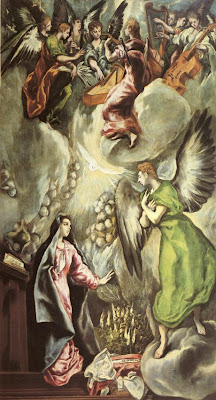 In his Autobiography, the Scottish poet and the Norton Professor of Poetry at Harvard University Edwin Muir (15 May 1887 – 3 January 1959) described the inspiration for the theme of two vivid poems on the theme of The Annunciation. One of the poems is below.

'I remember stopping for a long time one day to look at a little plaque on the wall of a house in the Via degli Artisti [Rome], representing the Annunciation. An angel and a young girl, their bodies inclined towards each other, their knees bent as if they were overcome by love, 'tutto tremante', gazed upon each other like Dante's pair; and that representation of a human love so intense that it could not reach farther seemed the perfect earthly symbol of the love that passes understanding.'

If one looks up Google Maps, and types in "Via degli Artisti [Rome]" one can see photographs of the entire length of the street.

From the look of the photographs, it is a quiet nondescript street, the sort that one would quickly walk through.

One does wonder if the small plaque is still there.


The angel and the girl are met,
Earth was the only meeting place,
For the embodied never yet
Travelled beyond the shore of space.
The eternal spirits in freedom go.

See, they have come together, see,
While the destroying minutes flow,
Each reflects the other's face
Till heaven in hers and earth in his
Shine steady there. He's come to her
From far beyond the farthest star,
Feathered through time. Immediacy
of strangest strangeness is the bliss
That from their limbs all movement takes.
Yet the increasing rapture brings
So great a wonder that it makes
Each feather tremble on his wings.

Outside the window footsteps fall
Into the ordinary day
And with the sun along the wall
Pursue their unreturning way
That was ordained in eternity.
Sound's perpetual roundabout
Rolls its numbered octaves out
And hoarsely grinds its battered tune.

But through the endless afternoon
These neither speak nor movement make,
But stare into their deepening trance
As if their gaze would never break.