Encouragement to catechesis and the sacraments 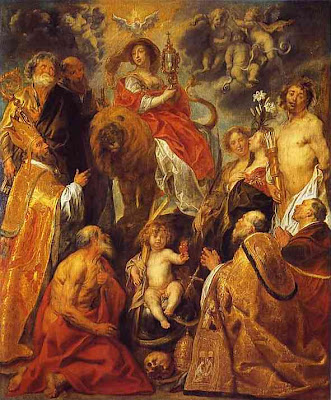 Zenit reports on on the meeting which Pope Benedict XVI had with the parish priests of Rome. At the meeting the Pope encouraged priests to to catechise parishioners about the depth of the liturgy and the meaning of the sacraments as encounters with God.

"He noted, "What is really important for me is that the sacraments [...] not be something foreign along with more contemporary endeavours." He added, "It can easily happen that the sacrament remains somewhat isolated in a more pragmatic context and becomes a reality that is not altogether inserted in the totality of our being."

The Pontiff stressed the need for catechesis in the parishes.

He affirmed that it is important that God "not be distant but reconcilable, concrete, that he enter our lives and really be a friend with whom we can talk and who talks with us."

He continued, "We must learn to celebrate the Eucharist, learn to know Jesus Christ, the God with a human face, up close, really enter into contact with him, learn to listen to him and to allow him to enter into us."

Sacramental communion, explained the Holy Father, is not just taking a piece of bread, but rather is opening "my heart so that the Risen One will enter the context of my being, so that he is within me and not just outside of me, and thus speaks with me and transforms my being."

"He gives me the sense of justice, the dynamism of justice, in zeal for the Gospel," noted Benedict XVI.

He affirmed, "This celebration, in which God not only comes close to us, but enters into the fabric of our existence, is essential to really be able to live with God and for God and to take the light of God to this world."

The Pope stated that this understanding also "leads me to the other because the other receives the same Christ, as I do."

He continued: "Hence, if the same Christ is in him and me, we also are no longer separate individual beings. Herein lies the birth of the doctrine of the Body of Christ, because we have all been incorporated if we receive the Eucharist correctly in the same Christ.

"Hence, my neighbour is truly close: we are no longer two separate 'I's, but we are united in the same 'I' of Christ."

The Pontiff told the pastors that "Eucharistic and sacramental catechesis must really go to the depth of our existence, to be, in fact, education to open myself to the voice of God, to let myself be opened to break this original sin of egoism and to open my existence profoundly, so that I will really be just."

He noted, "We must all learn the liturgy better, not as something exotic but as the heart of our being Christian, which does not open easily to a distant man, but which is, on the other hand, precisely openness to the other, to the world."

The Holy Father emphasised: "We must all collaborate in celebrating the Eucharist ever more profoundly: not only as a rite but as an existential process that touches me profoundly, more than anything else, and changes me, transforms me and, by transforming me, sparks the transformation of the world that the Lord desires and of which He wishes to make me an instrument."


Jacob Jordaens, a Flemish artist, was born in 1593 into the family of an Antwerp linen merchant

Jordaens did not visit Italy and never tried to imitate the Italian style.

After Rubens’ death, Jordaens became the leader of the Antwerp school, carrying out innumerable commissions for Church and Court between 1640 and 1650, including 22 pictures for the salon on Queen Henrietta Maria at Greenwich, work for the Scandinavia and French courts.

In 1650, the artist adopted Calvinism, but continued to receive commissions from the Catholic Church.

Jordaens was fined 200 pounds and 15 shillings for scandalous or heretical writings between 1651 and 1658.

George Mulvany (1809–69; director 1862–69) Keeper of the Royal Hibernian Academy in Dublin, in 1865 had a bargain by purchasing Jordaens’s large Veneration of the Eucharist for only £84

Rubens` The Triumph of the Eucharist series (tapestries) was the most ambitious of the four tapestry series Rubens designed in the course of his career. It reflected the passionate devotion of the Belgians towards the Eucharist. In the following years, the series by Rubens stimulated a slew of imitations featuring dramatic figures in billowing costumes set within tromp l'oeil architectural frames and tapestries within tapestries.

Life-size figures in shallow architectural settings produced an effect of spontaneity and a pleasurable illusionist effect. The architectural frames had the merit of being easier to weave in tapestries than complex landscape grounds.