The decline of Confession 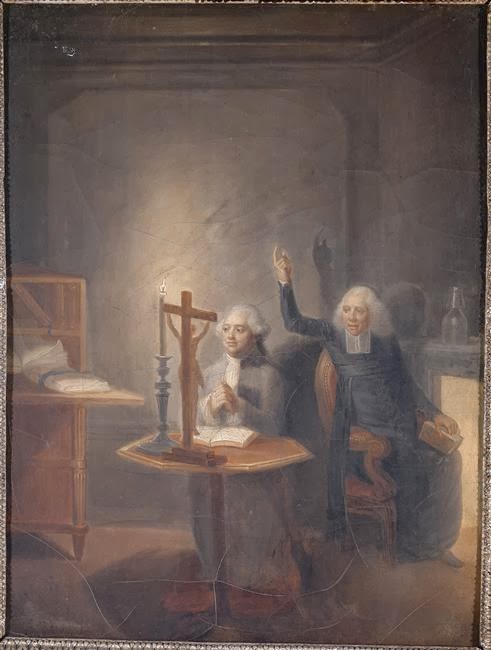 
There was a time when Catholics, even absolute monarchs, went to Confession regularly

During the French Revolution Hauer was a captain of the National Guard in the Section des Cordeliers.

But even in those turbulent times, the final confession before death was regarded as the last opportunity to become reconciled with God. Even vicious enemies would never deprive their victims of that opportunity. Only the most evil would

Such was the belief in sin, life after death and final Judgment

Professor Eamon Duffy, a much more distinguished and able historian wrote a review of the work in The Guardian

As usual Professor Duffy`s review is worth more and much more illuminating than the book which he reviews. Read the review.

"[I]n the years after the Second Vatican Council, those long queues dwindled to nothing, as Catholics in their millions simply stopped attending. Despite vehement attempts by John Paul II to promote its revival, frequent confession is now the custom of the few."

While recognising that there is some truth in Cornwell`s claims, Cornwell`s thesis is utterly unbalanced:

"[H]is powerful, persuasive and disturbing book is not in fact a history of confession.

It is instead an impassioned response to the crisis in the Catholic church over sexual abuse by clergy. Cornwell has a stark and challenging case to argue.

Confession, he believes, has been on balance a malign institution, both religiously and psychologically. The obsessive emphasis of Catholic moral theology on sexual sin fostered joyless self-loathing among Catholics at large, while its rule-bound legalism propagated an infantile understanding of sin as mere contravention of external rules, rather than radical failure in virtue.

The "dark box" itself was a well-intentioned innovation of the 16th century, designed to ensure that confessions were heard in church, not a priest's bedroom.

Ironically, Cornwell argues, it provided an ideal environment – dark, intimate, where the priest sat judicially before the subjugated penitent – for clerical domination and the solicitation, seduction or sexual grooming of the young and vulnerable.

And Cornwell sees Pope Pius X's decision in the early 20th century to extend the obligation to confess to children as young as seven as a moral disaster, putting them at the mercy of rogue clergy, teaching them to think badly of themselves, and to imagine God as "trivial, petulant" and "obsessed with cleanliness". ...

Anyone who experienced a pre-conciliar Catholic upbringing will recognise the force of Cornwell's case. The exodus from the confessional queue speaks volumes for itself.

Most clergy of course were neither prurient nor predators, but the institutional church has undoubtedly been far too interested in what the faithful do in bed. Yet Cornwell at times lays it on with a trowel.

The fact is that, religious or otherwise, we are all far too interested in what people do in bed. Sex is a problem for the Catholic church because it is a problem for the human race. Human sexuality can be a source of life, joy and tenderness. But from the Trojan war to the poisonous antics of Jimmy Savileit is also the cause of some of the world's grossest ills, and in our society is routinely the locus of betrayal, infidelity and broken promises. "

Duffy criticises the one sided polemic of Cornwell. Cornwell ignores the matters other than sex which Confession was and is concerned about. He summarises his view thus:

"There are 10 commandments, and only two of them concern sex.

The Dark Box doesn't discuss the thousands of catechisms and devotional works produced down the ages to help lay-people examine their consciences, but by and large those works treat sex with notable reticence, devoting far more space to other kinds of sin.

The clergy who promoted the confessional from the 16th century onwards were indeed negative about sex, but they confronted communities where people were at least as liable to steal each other's corn, to gossip or lie, to fiddle the scales in their shops, and to settle their arguments with knives or bottles.

The role of confession in moderating these sins, cultivating civility and a sense of right and wrong, is also a necessary part of the story.

The Dark Box is a major contribution to the Catholic church's examination of conscience about the roots and circumstances of sexual abuse. But for a rounded historical assessment of confession itself, we will need to look for a different kind of audit."


Unfortunately for Cornwell there is one major error in his thesis. He makes out that until the Pontificate of St Pope Pius X, children did not make confession until adolescence. This is wrong


St Teresa of Lisieux for instance made her first confession at the age of six in 1879 (Pope Pius X only became Pope in 1903). See Biography   Infant Confession was a very common practice before Pius X issued Quam Singulari in 1910

As to what Quam Singulari was about, please see Cardinal Wright`s discussion on Infant Confession and Communion on the Vatican website here

From the discussion one can see that even as an Anglican, Blessed Cardinal Newman was in favour of the approach eventually allowed by Pope Pius X and which at the time of Newman was already an established practice and norm