The Day of Five Canonisations 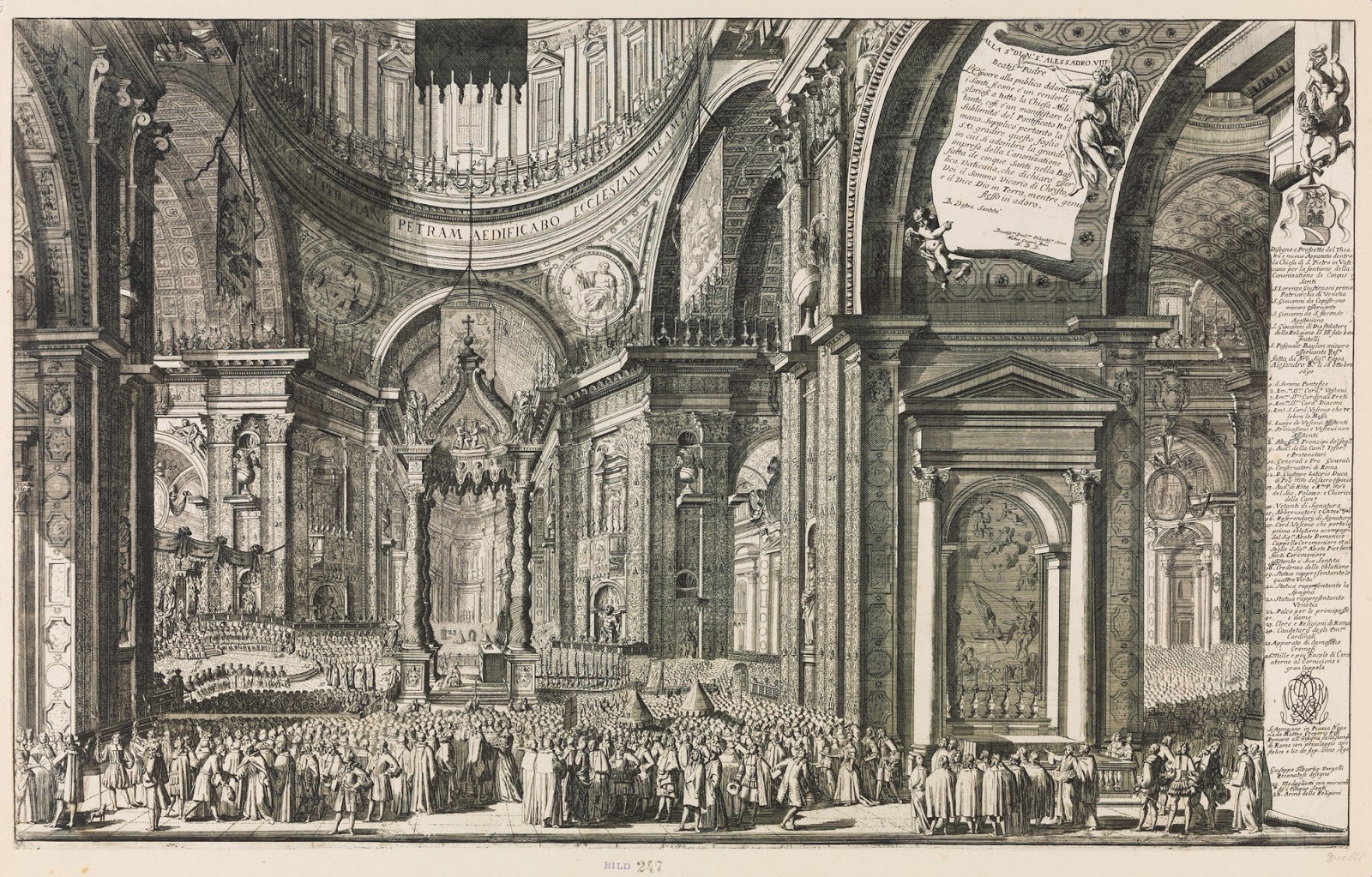 It was an important event.

After the closing of the Council of Trent, only two saints were canonised in the remainder of the sixteenth century

In the seventeenth century, there were only 24 canonisations of which this event created more than 20% of that total

The saints raised that day to  the altars were:

Saint Lorenzo Giustiniani, Patriarch of Venice;
Saint Giovanni of Capistrano, the Franciscan monk who distinguished himself in the victory of the Hungarians against the Turks;
Saint  John of God, founder of the Hospital Order;
St. Pasquale Baylon, the so-called Mad Saint and founder of the "Fatebenefratelli;" and
Saint Giovanni da San Facondo.

The Pope`s nephew  Cardinal Pietro Ottoboni commisioned his tomb and it was designed by Count Arrigo di San Martino.

But it was the Genovese sculptor Angelo de' Rossi (1671 – June 12, 1715) who executed the famous bas relief at the base of the tomb which commemorates the great canonisations that day in 1690 (below) 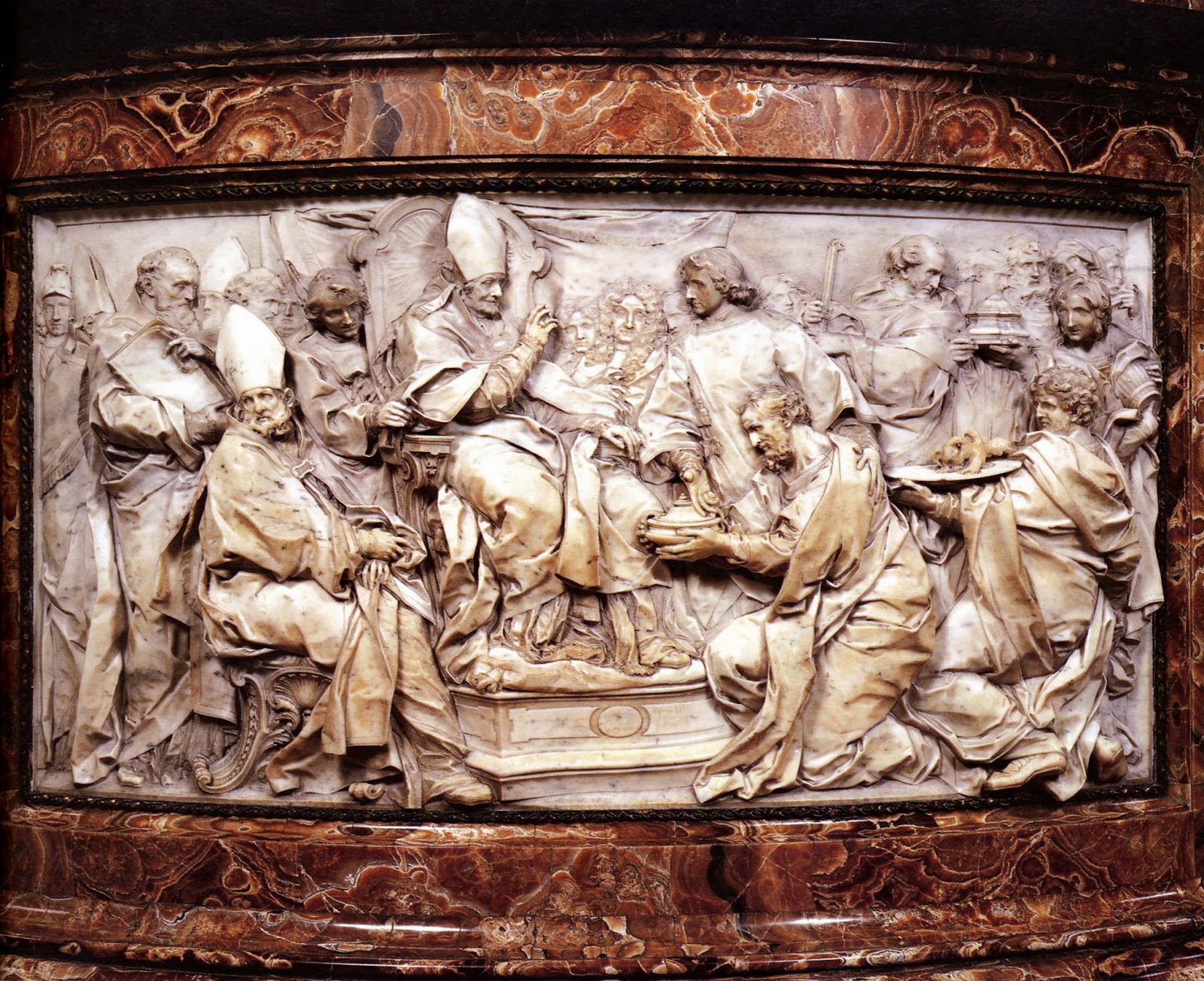 For a drawing of the bas relief  by Pompeo Litta: 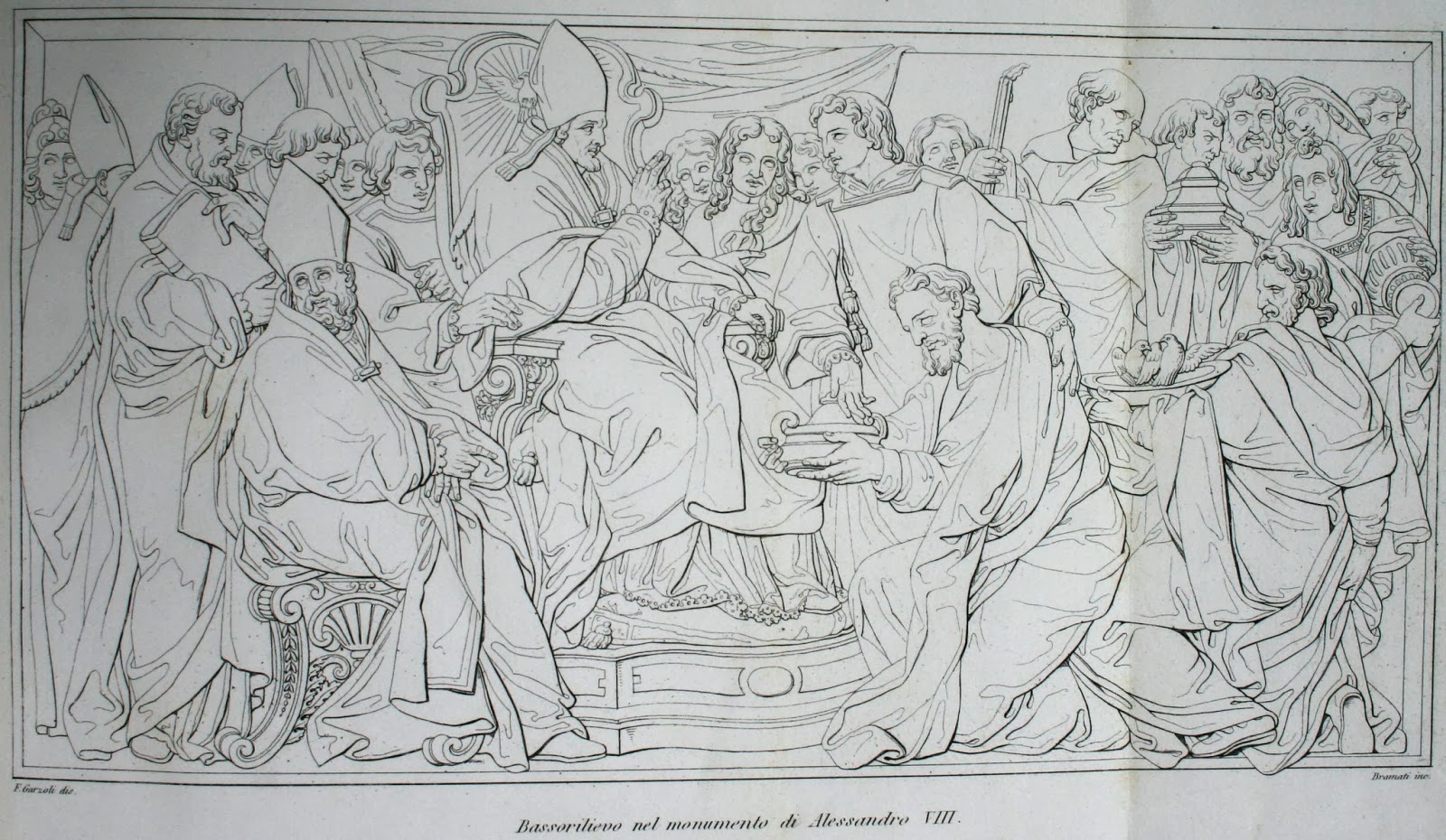 Louis XIV had a gypsum model of the bas relief placed in the French Academy as an example for the students.

It is considered to be de Rossi`s masterpiece. With the outward curve of the relief and the subtlety of the sculpture, the figures seem to move and emerge out of the marble

The man standing before the Pope presenting the acolyte with the gifts is the late Pope`s great nephew, Cardinal Pietro Ottoboni.

The Pope favoured him and other members of his family. At the canonistaion, Ottoboni aged 23 years at the time was the Promoter of the Faith. Despite at the time being a lay man but cardinal, Ottoboni was appointed Vice-Chancellor of the Church by his Pontiff relative. He held this post until his death, a period of over 50 years

Ottoboni was also the one responsible for the tomb

Ottoboni was a great art patron and collector.

On his death his collection included more than 500 art works

In Francis Haskell, Patrons and painters, London 1963, Haskell called Ottoboni  «the most adventurous patron of the time» and his Palazzo alla Cancelleria  «the centre of the most enlightened and extravagant patronage in Rome»

In the then liturgy of canonisation, the scene represents the presentation of gifts: bread, wine, doves, candles

Other members of the Ottoboni family are depicted, including Cardinal Giovanni Rubini, the son of the Pope`s sister who was Papal Secretary of State

As a Venetian from a Venetian noble family, the Pope was canonising the first Venetian patriarch, Lorenzo Giustiniani (1381 – January 8, 1456)