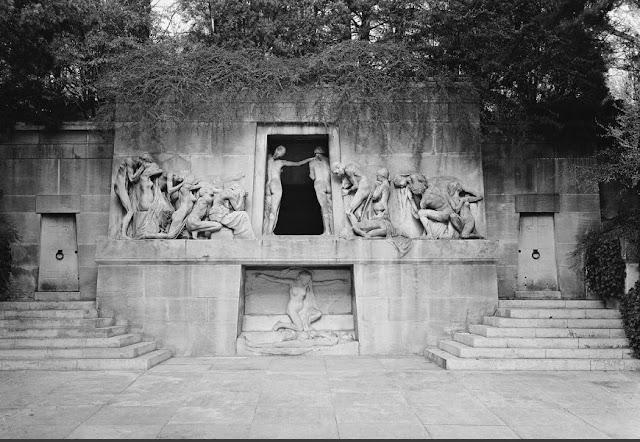 It is of course renowned as the cemetery of the famous such as Peter Abelard , Honoré de Balzac , Jean Auguste Dominique Ingres and  many many others

Bartholomé`s monument is dedicated to all the dead, known and unknown, in the cemetery

It is also the front of the cemetery`s ossuary

The French conception of the cemetery has changed over the years. The middle class had its « un culte des morts ». The Rationalists had their « champ des morts ». With family tombs one had the « ville des morts »

Recently in the Mass of Suffrage for Deceased Popes and Cardinals, the Pope discussed what on the face of it appears to be the rather strange practice of visiting graves in a cemetery, a practice which in some places is fast falling into desuetude

"[V]isiting cemeteries has helped us to renew our bond with the loved ones who have left us; death, paradoxically, preserves that which life cannot hold onto.

The way our dead lived, what they loved, feared and hoped, what they rejected, we discover, in fact, in a special way precisely at their graves, which are almost a mirror of their existence, of their world: they speak to us and lead us to renew the dialogue that death brought to a crisis.

Thus, the cemeteries constitute a kind of assembly in which the living meet their dead and strengthen the bonds of communion that death was unable to interrupt.

And here in Rome, in these unique cemeteries that are the catacombs, we notice, as in no other place, our link to ancient Christianity, which we feel quite near to us.

When we enter into the corridors of the Roman catacombs – just as when we enter the cemeteries of our own cities and towns – it is as if we have crossed over a spiritual threshold and entered into communication with them whose past, with its joys and sorrows, failures and hopes, they safeguard.

This happens because death regards the man of today in the same way that it regarded the man of the past; moreover, even if many things of the past have become foreign to us, death has remained the same.

In the face of this reality, human beings of every age seek a glimmer of light that permits hope, that still speaks of life, and visiting cemeteries expresses this desire too."