The Vision of the Blessed Juliana of Mont Cornillon 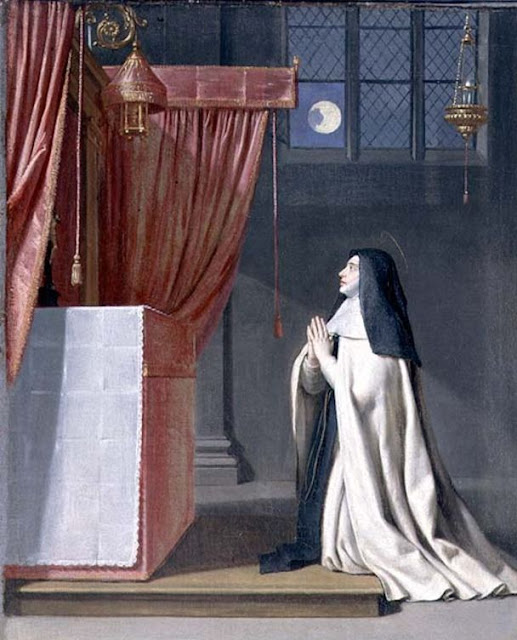 It is surprising how often many of the important devotions and feasts of the Catholic Church have been or are initiated or promoted through nuns
Many of the devotions have spread like wild fire. They are picked up and suddenly they spread. There is no calculation. Often the devotion "catches on" long after the originator is dead.
One of them is the devotion for the Feast of Corpus Christi.
It was primarily promoted by the petitions of the thirteenth-century Augustinian nun Juliana of Liège, (also called St. Juliana of Mt. Cornillon) (1193–1252). She was in charge of a leper colony.
She did not promote the idea for personal agrandissement or for political ends. The important thing for her was the spread of the idea. The idea spread despite very strong opposition.
The feast was first celebrated in Liège in 1246, and later adopted for the universal church in 1264.
Here is an extract from The Feast of Corpus Christi by Barbara R. Walters, Vincent Corrigan, Peter T. Ricketts. 2006 The Pennsylvania State University Press. It describes her life and her work in establishing the feast.