The Liberation of St Peter 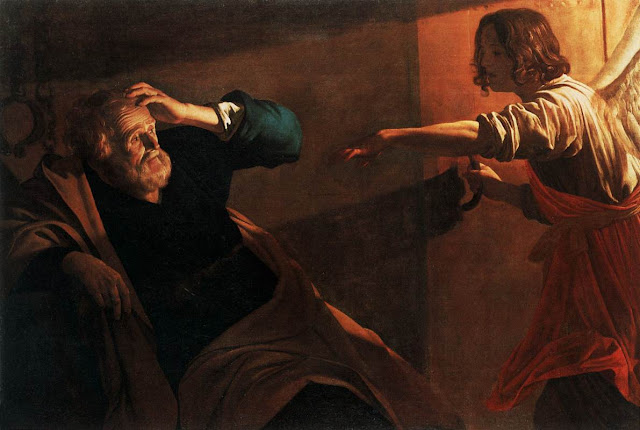 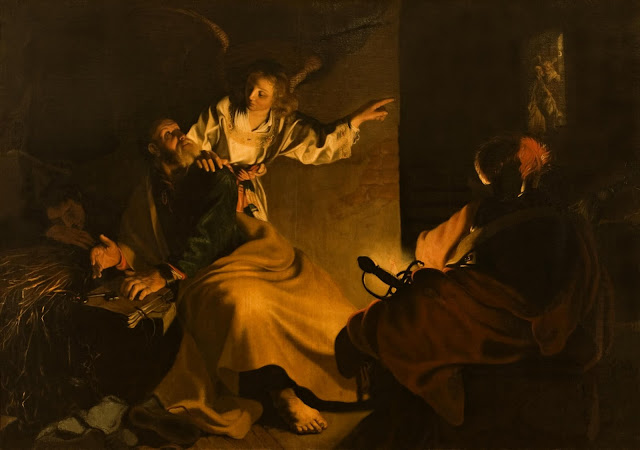 Peter was imprisoned by Herod in Jerusalem.
Herod, to win the favour of the Jews, had thrown him into prison, intending “to bring him out to the people” (Acts 12:4).
Ardent prayer was offered by the Church for him: "Peter was being kept in prison, but prayer was fervently being made to God on his behalf" (Acts 12:5).
Peter is miraculously saved from prison by an angel while the guards lie sleeping (Acts of the Apostles 12:5-12).
The angel says "Wrap your mantle round you and follow me" (Acts 12:8)to the Apostle. Guided by the angel, Peter escaped from prison and regained his freedom.
"The angel of the Lord will rescue those who fear him” (Ps 34 [33]:7).
Peter then proceeds to Jerusalem, then Rome where he will endure martyrdom.
In Italy Gerard van Honthorst is known as as Gherardo delle Notti for his nighttime candlelit subjects, was a Dutch Golden Age painter of Utrecht.
Following a sojourn in Italy in the 1610s, he returned to Utrecht in 1620. The influence of Caravaggio is unmistakeable. He was one of the so-called Dutch Caravaggisti
Honthorst became the court painter at The Hague, where he largely devoted himself to portraits, becoming one of the few seventeenth-century Dutch artists to earn an international reputation.
The difference in the two compositions of the same theme is particularly striking and interesting.
Posted by Unknown at 7:48 pm