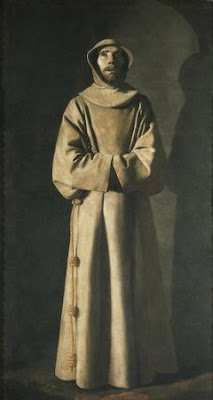 According to legend, Pope Nicholas V went down into the crypt where St Francis was buried. Opening the tomb, he found the body of the saint with its eyes turned to heaven in ecstasy. It is only a legnd as the tomb was not discovered until 1818.

However the theme resonated.

The painting was originally painted for a convent in Madrid. It then made its way to the Convent of the Colinettes in Lyon. After the Revolution it was bought by the Museum.

It is a monumental and sculptural apparition which is painted. Light comes from an open door on the left. There is aninvisible presence in the scene. The eyes of the figure are turned inwards. The mouth is open as if in silent conversation. 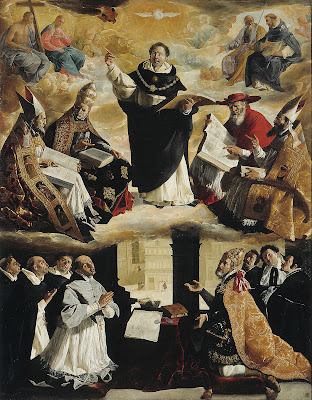 This was painted for the College of St Thomas Aquinas in Seville in 1631.

It is an ambitious painting.

At the front one can see the founder of the College, Diego Deza. The Emperor Charles V is shown kneeling with others in prayer.

The saint is flanked by four Doctors of the Church. Above them are the Holy Spirit, Christ, Mary, Saint Paul and Saint Dominic.